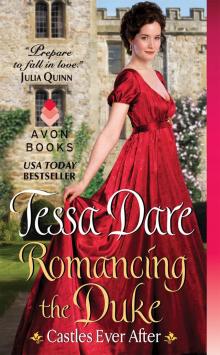 The name Isolde Ophelia Goodnight did rather spell a life of tragedy. Izzy could look at her situation and see just that. Motherless at a young age. Fatherless now, as well. Penniless. Friendless.

But she’d never been hopeless.

Because the name Isolde Ophelia Goodnight also suggested romance. Swooning, star-crossed, legendary romance. And for as long as she could remember, Izzy had been waiting—with dwindling faith and increasing impatience—for that part of her life to begin.

Once she’d grown old enough to understand her mother’s death, Izzy had consoled herself with the idea that this was all part of her epic tale. The heroines in fairy stories were always motherless.

When Papa overspent their income, and the maid was dismissed, she told herself the drudgery would pay off someday. Everyone knew that Cinderella had to scrub the floors before she could win the handsome prince.

By time she turned fifteen, their finances had improved, thanks to Papa’s writing success. Still no prince, but there was time. Izzy told herself she’d grow into her largish nose and that her frizzled hair would eventually tame itself.

She hadn’t, and it didn’t. No ugly-duckling-turned-swan here, either.

Her seventeenth birthday passed without any pricking of fingers.

At twenty-one, life forced a difficult truth on her somewhere on the road between Maidstone and Rochester. Real highwayman were neither devilishly charming nor roguishly handsome. They wanted money, and they wanted it quickly, and Izzy ought to be very glad they weren’t interested in her.

One by one, she’d let go of all those girlish dreams.

Then last year, Papa had died, and all the stories dried up completely. The money was gone soon after that. For the first time in her life, Izzy verged on true desperation.

Her cravings for romance were gone. Now she’d settle for bread. What fairy tales were left over for a plain, impoverished, twenty-six-year-old woman who’d never even been kissed?

She clutched the letter in her hand. There it was, in black ink on white paper. Her very last hope. She forced herself not to hold it too tightly, for fear it might crumble to dust.

It is my duty as executor to inform you that the Earl of Lynforth has died. In his will, he left you—and each of his goddaughters—a bequest. Please meet me at Gostley Castle, near Woolington in the county of Northumberland, on this twenty-first of June to settle the particulars of your inheritance.

A bequest. Perhaps it would be as much as a hundred pounds. Even twenty would be a windfall. She was down to shillings and pence.

From a distance, it could have looked romantic. A collection of mismatched turrets and ranging, crenellated walls, studded amid rolling green fields. But the surrounding park had grown so wild and dense from neglect that by the time the castle came into view, she was already cowering in its shadow.

This castle didn’t welcome or enchant.

“Here we are, miss. ” The driver didn’t seem to like it any better than Izzy did. He pulled his team to a halt well outside the barbican, a stone gatehouse set some distance from the castle itself.

After helping her down from the carriage, he turned up the collar of his coat and unloaded her baggage—a single, battered valise. He carried it to the stone steps of the ancient gatehouse, strode briskly back, jammed his hands in his pockets, and cleared his throat. Waiting.

Izzy knew what he was after. She’d paid the man in Woolington—he wouldn’t agree to transport her without payment in advance—but now he wanted an additional expression of thanks. She fished a sixpence from her purse. So few coins remained, the purse didn’t even rattle.

The driver pocketed her offering and touched his cap. “What was yer name again, miss?”

She waited to see if he would recognize it. Most of the literate people in England would, and a great many of their domestic servants, besides.

The driver only grunted. “Jes’ wanted to know it, in case someone comes around asking. If you’re never heard from again. ”

Izzy laughed. She waited for him to laugh, too.

Soon driver, team, and carriage were nothing more than the fading crunch of wheels on the road.

Izzy picked up her valise and walked through the barbican. A stone bridge carried her over what once had been a moat but now was only a slimy green trickle.

She’d done a bit of research in advance of her journey. There wasn’t much to read. Only that Gostley Castle had once been the seat of the Rothbury dukedom, in Norman times.

It didn’t look inhabited now. There was no glass in many of the windows. No lights in them, either. There should have been a portcullis that dropped to bar the entrance—but there was nothing there. No door, no gate.

She walked through the archway and into the central, open courtyard.

“Lord Archer?” Her voice died in the air. She tried again. “Lord Archer, are you here?” This time, her call got a respectable echo off the flagstones. But no answer.

Dizzied from her strange surroundings and weak with hunger, Izzy closed her eyes. She coerced air into her lungs.

You cannot faint. Only ninnies and consumptive ladies swoon, and you are neither.

It started to rain. Fat, heavy drops of summer rain—the kind that always struck her as vaguely lewd and debauched. Little potbellied drunkards, those summer raindrops, chortling on their way to earth and crashing open with glee.

She was getting wet, but the alternative—seeking shelter inside one of the darkened arches—was less appealing by far.

A rustling sound made her jump and wheel. Just a raven taking wing. She watched it fly over the castle wall and away.

She laughed a little. Really. It was too much. A vast, uninhabited castle, rain, and now ravens, too? Someone was playing her a cruel trick.

Then she glimpsed a man across the courtyard, standing in a darkened archway.

And if he was a trick, he wasn’t a cruel one.

There were things in nature that took their beauty from delicate structure and intricate symmetry. Flowers. Seashells. Butterfly wings. And then there were things that were beautiful for their wild power and their refusal to be tamed. Snowcapped mountains. Churning thunderclouds. Shaggy, sharp-toothed lions.

This man silhouetted before her? He belonged, quite solidly, in the latter category.

So did the wolf sitting at his heel.

It couldn’t be a wolf, she told herself. It had to be some sort of dog. Wolves had long been hunted to extinction. The last one in England died ages ago.

But then . . . she would have thought they’d stopped making men like this, too.

He shifted his weight, and a slant of weak light revealed the bottom half of his face. She glimpsed a wide, sensual slash of a mouth. A squared jaw, dark with whiskers. Overlong hair brushed his collar. Or it would have, if he had a collar. He wore only an open-necked linen shirt beneath his coat. Buckskin breeches hugged him from slim hips to muscled thighs . . . and from there, his legs disappeared into a pair of weathered, dusty Hessians.

Oh, dear. She did have such a weakness for a pair of well-traveled boots. They made her desperate to know everywhere they’d been.

Her hear
t beat faster. This didn’t help with her lightheadedness problem.

“Are you Lord Archer?” she asked.

“No. ” The word was low, unforgiving.

The beast at his heel growled.

“Are you the caretaker?” she asked. “Are you expecting him soon?”

Was that amusement in his voice?

She swallowed hard. “I received a letter. From Lord Archer. He asked me to meet him here on this date regarding some business with the late Earl of Lynforth’s estate. Apparently he left me some sort of bequest. ” She extended the letter with a shaking hand. “Here. Would you care to read it for yourself?”

That wide mouth quirked at one corner. “No. ”

Izzy retracted the letter as calmly as she could manage and replaced it in her pocket.

He leaned one shoulder against the archway. “Aren’t we going to continue?”

“This game. ” His voice was so low it seemed to crawl to her over the flagstones, then shiver up through the soles of her feet. “Am I a Russian prince? No. Is my favorite color yellow? No. Would I object if you were to come inside and remove every stitch of your damp clothing?” His voice did the impossible. It sank lower. “No. ”

He was just making sport of her now.

Izzy clutched her valise to her chest. She didn’t want Snowdrop getting wet. “Do you treat all your visitors this way?”

Idiot. She cursed herself and braced for another low, mocking “no. ”

Oh, Lord. She ought to have guessed it earlier. The fatigue and hunger had done something to her brain. She could almost believe the castle, the ravens, the sudden appearance of a tall, dark, handsome man. But now he was flirting with her?

She had to be hallucinating.

The rain beat down, impatient to get from the clouds to the earth. Izzy watched drops pinging off the flagstones. Each one seemed to chisel a bit more strength from her knees.

The castle walls began to spin. Her vision went dark at the edges.

Her valise dropped to the ground.

The beast snarled at it.

The man moved out from the shadows.

And Izzy fainted dead away.

The girl crumpled to the flagstones with a wet thud.

Ransom winced at the irony. Despite all that had happened, he still had the ladies swooning. One way or another.

He released Magnus with a low command. Once the dog had completed his wet-nose investigation, Ransom brushed the animal aside and took his turn.

He ran his hands over the limp heap of joints and limbs before him. Damp muslin, worn boots. Small hands, slender wrists. There wasn’t much of her. She seemed to be half petticoats, half hair.

He felt the warm huff of her breath against his hand. He slid his touch lower, searching for the girl’s heartbeat.

His palm brushed over a full, rounded breast.

A surge of . . . something . . . passed through him, unbidden. Not lust, just male awareness. Apparently, he should stop thinking of her as “the girl. ” She was most definitely “the woman. ”

Ransom cursed. He didn’t want visitors. Especially not visitors of the female kind. He had enough of that with the local vicar’s daughter, Miss Pelham. She came around the castle every week or so, offering to read him sermons or some other foolishness. At least when Miss Pelham made her sunny march up the hill, basket of good deeds threaded over one arm, she came expecting to find a scarred, unshaven wreck of a man. And she was far too sensible to faint at the sight.

This woman crumpled on the flagstones hadn’t been expecting Ransom.

What was it she’d said about a Lord Archer? She had a letter on her somewhere that explained it, but he couldn’t bother with that now. He needed to get her inside—warm her up, give her a splash of whisky and milk in her tea.

He wrestled her sodden, unconscious form into his arms and stood. He adjusted her weight, finding the fulcrum between her hips and her shoulders, then made his way up the stairs to take her inside.

As he took the eighth step, she shifted in his arms. He froze, bracing for unpleasantness. She’d fainted dead at her first sight of him. If she woke to find him carrying her now, she might expire from the shock. Or split his eardrums with a shriek. Just what he didn’t need—an injury to his hearing.