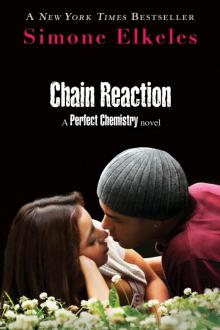 Being the youngest of three boys definitely has its advantages. I’ve watched my brothers get into some serious trouble when they were in high school. I was never expected to follow in their footsteps. I get straight As, I don’t get into fights, and from age eleven I knew what I wanted to be when I grew up. I’m known as “the good kid” in mi familia—the one who’s expected to never fuck up.

My friends know I have a crazy rebellious streak, but my family doesn’t. I can’t help it—I’m a Fuentes, and being rebellious is deeply rooted in my genes. The kid my family sees on the outside isn’t necessarily what’s on the inside, and I intend to keep it that way. I vowed never to stray from my ultimate goal of going to college and studying aeronautics, but taking a few physical risks every once in a while feeds that adrenaline rush I crave.

I’m standing at the bottom of a rock formation in Boulder Canyon with four of my friends. Jack Reyerson brought rock climbing gear, but I don’t wait to strap on a harness. I grab one of the ropes and attach it with a carabiner on my belt loop so when I reach the summit I can anchor the rope for the rest of the group.

“It’s not safe to go up without gear, Luis,” Brooke says. “But you already know that, don’t you?”

I start a free solo ascent, making my way up the rock formation. This isn’t the first free solo I’ve done at Boulder Canyon, and I’ve had enough training to know what the hell I’m doing. I’m not saying it’s not a risk—it’s just a calculated one.

“You’re crazy, Luis,” Jamie Bloomfield yells from below as I climb even higher. “If you fall, you’ll die!”

“I just want everyone here to know that I’m not responsible if you break every bone in your body,” Jack says. “I should have had you sign a liability waiver. ”

Jack’s father is a lawyer, so he has an annoying habit of announcing his lack of responsibility about pretty much everything we do.

I don’t tell them that climbing without a safety harness is an adrenaline rush. It actually makes me want to push myself harder and take more risks. Jamie called me an adrenaline junkie after I snowboarded down the black diamond slope in Vail on the winter break trip last year. I didn’t tell her that fooling around with the girl I met in the lobby that night was also an adrenaline rush. Does that qualify me as a junkie?

When I’m halfway to the summit, I’ve got my right hand secured above me and one foot planted inside a small crevice. It’s high enough to make me look down to see what I might be falling on if I do lose my grip.

Dios mío. My friends seriously need to chill. They’re white, and haven’t been brought up in a Mexican family full of guys who thrive on challenges and living on the edge. Even though I’m supposed to be the one Fuentes brother who’s smart enough not to take risks, I feel most alive when I do.

The summit is a few feet away. I stop and look across the sky, getting a bird’s-eye view of the landscape. It’s fucking amazing. I used to live in Illinois, where the landscape was completely flat except for the skyscrapers. Looking out across the Colorado mountains makes me appreciate nature. The wind is at my back, the sun is high in the sky, and I feel invincible.

I reach up with my left hand and grab on to the edge of a crevice in the rock face about ten feet from the top. I’m almost there. As I scan the rock for a spot to place my foot, I feel something sharp pierce my hand.

I just got bitten by something.

Instinctively, I quickly plant my foot as I snatch my hand back and glance at it. Two small puncture marks are on the back of my hand with my blood streaming out of them.

“Stop scratching your balls so we can get up there before the sun sets, Luis!” Eli Movitz screams from below.

“I hate to break the news to you guys,” I call down to them as the tip of a snake’s head appears above me, then sneaks back inside for cover, “but I just got bitten by a snake. ”

I didn’t get a good look at the sucker, so I have no clue if it’s venomous or not. Shit. I look down at my friends and vertigo hits almost immediately. This was not in the plan. My heart is racing and I squeeze my eyes shut, hoping to stop my head from spinning.

“What did it look like?” Jamie calls up to me. “Did it have stripes?”

“I only saw the tip of the head, and I’m not about to go back up there and get a closer look,” I tell her, wondering if I should move sideways and continue the last ten feet of my ascent or attempt to go back down.

I’m a math guy, so I immediately consider the odds of surviving this situation. My hand definitely stings, but it’s not numb. Surely if I was just pumped with a shitload of venom I’d start feeling numb and stiff right about now.

“I knew Luis shouldn’t have free solo’d it,” Jack’s voice echoes from below. “I knew it! Nobody listened to me, and now he’s stuck up there while venom is probably spreading throughout his body. ”

“Shut the fuck up, Jack!” I yell. “Snakes don’t have fuckin’ legs, so how was I supposed to think there’d be one hidin’ in the face of a damn rock that’s ten feet below the summit?”

“A snake just punctured my skin with its fangs, Brooke,” I say as I head back down slowly. It might be my imagination, but I think my hand is starting to get numb. “Of course I don’t feel normal. ”

“Get a ranger with antivenom!” Jack yells to the rest of them. We’d have to drive to find one. None of us have our licenses yet, so we’re screwed. Actually, I’m the only one who’s screwed.

With all the talk of antivenom and rattlers, I can’t think straight and lose traction.

My foot slips. Then my hand, the one without two puncture holes in it, starts sweating all of a sudden and I lose my grip. I slip down the side of the rock face and hear the gasps and screams of my friends below while I scramble to get a foothold or a hand on something solid. It’s no use.

All I can think of before I hit the ground is I’m not ready to die.

I said it. I couldn’t look into my boyfriend’s deep, dark eyes as the words flowed seamlessly from my lips, because I’m also holding something back. I figured saying I love you as a conversation starter would be easier than saying I might be pregnant. It was cowardly not to look into his eyes and tell him everything, but saying those three words is a start. I feel more vulnerable than I’ve ever felt before.

I don’t do vulnerable well.

I breathe out slowly and gather up the courage to look up at my boyfriend of a year. We lost our virginity to each other a month ago when his parents went to Mexico to visit his grandmother.

I can’t even think about it now as I focus on him. Okay, I said I love you. Your turn to say it back, like you whispered in my ear the first time we made love. Then I’ll tell you I missed my period this month and I’m freaking out. Then you’ll tell me everything will be okay and that we’ll deal with it together.

He’s smiling. Well, kinda. The side of his mouth is quirked up, like he’s amused. I wasn’t going for amused. I was going for affection and adoration—signs that it was okay to tell him my secret. I look toward Lake Michigan, wishing we weren’t outside and hoping nobody from our high school suddenly shows up. I wrap my arms around myself. It’s not that warm in Illinois yet, and the wind off the lake
is definitely making me shiver. Or maybe it’s my nerves.

The first time he said it was after the homecoming dance back in September. Then on New Year’s Eve. And on Valentine’s Day. And my birthday. So many nights I lie alone in my bed and think about how our love will last forever.

We don’t have the same friends because we live on different sides of Fairfield, but that’s never mattered. We’ve made it work. After school, we usually go to my house and just … be with each other.

And now we might be having a baby. How is he going to take the news?

Today is the last day of our freshman year of high school before summer break. Marco suggested we go to the beach after school when I told him I needed to talk.

It makes sense, really. The beach is our special place.

We had our first kiss on the beach last summer. He asked me to be his official girlfriend there the second week of school. We made snow angels on that same beach back in January when we had a snow day. We come here to share all our private secrets, like once he told me where gang members stashed guns around town so the police wouldn’t catch them carrying it. Marco has always known guys who were heavily connected.

He steps away from me, and immediately I get goose bumps as if my body knows something is up besides the wind coming off the lake. He combs his fingers through his jet-black hair. Then sighs. Twice.

“I think we should see other people,” he murmurs.

I cock my head to the side. Obviously I didn’t hear him right.

There are a few phrases that a girl expects to hear after she declares her love to her boyfriend. I can think of a few right off the top of my head, but I think we should see other people isn’t one of them.

I’m stunned. And I can’t stop shaking as I think about being pregnant without him at my side, smiling and telling me everything will be okay.

“You always said you’d never date a gang member, and I’m gonna be one. ”

“Of course I won’t date a gang member,” I blurt out. “Just two days ago you told me you’d never join the gang, Marco. It was right before we made love. Remember?”

He winces. “I said a lot of things I probably shouldn’t have. And could you please not call it makin’ love … every time you say it like that you make me feel like shit. ”

He rolls his eyes, and I swear my stomach lurches in response. “See, now you’re makin’ me feel like shit on purpose. ”

He opens his mouth to say something, then must think better of it, because he shuts it.

I scan his face, hoping he’ll say Just joking! Of course I pick you over the Latino Blood, but he doesn’t. My heart feels like someone is chipping away at it, piece by piece.

“No we’re not. We’re perfect together. We go to the same school, we have the best time together … we’re both Mexican. ”

Chain Reaction by Simone Elkeles / Young Adult / Romance & Love have rating 5.3 out of 5 / Based on53 votes