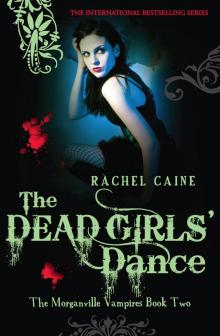 It didnt happen, Claire told herself. Its a bad dream, just another bad dream. Youll wake up and itll be gone like fog.

She had her eyes squeezed tight shut. Her mouth felt dry, shriveled-up, and she was pressed against Shanes hot, solid side, curled up on the couch in the Glass House.

Its just a bad dream.

But when she opened her eyes, her friend Michael was still dead on the floor in front of her.

Shut those girls up, Shane, or I will, Shanes father snapped. He was pacing the wooden floor, back and forth, hands clasped behind him. He wasnt looking at Michaels body, shrouded under a thick, dusty velvet curtain, but it was all Claire could see, now that shed opened her eyes again. It was as big as the world, and it wasnt a dream, and it wasnt going away. Shanes dad was here, and he was terrifying, and Michael

Michael was dead. Only Michael had already been dead, hadnt he? Ghostly. Dead during the dayalive at night

Claire realized she was crying only when Shanes dad turned on her, staring with red-rimmed eyes. She hadnt felt that scared when shed stared into vampire eyeswell, maybe once or twice, because Morganville was a scary place, generally, and the vampires were pretty terrifying.

Shanes fatherMr. Collinswas a tall, long-legged man, and his hair was wild and curly and going gray. Long enough to reach the collar of his leather jacket. He had dark eyes. Crazy eyes. A scruffy beard. And a huge scar running across his face, puckered and liver colored.

Yeah, definitely scary. Not a vampire, just a man, and that made him scary in whole different ways.

She sniffled and wiped her eyes and quit crying. Something in her said, Cry later; survive now. She figured that voice had spoken inside of Shane, too, because Shane wasnt looking at the velvet-covered sprawl of his best friends body. He was watching his father. His eyes were red, too, but there were no tears.

Now Shane was scaring her, too.

Eve, Shane said softly, and then, louder, Eve! Put a sock in it!

Their fourth roommate, Eve, was collapsed in an awkward heap against the far wall by the bookcases, as far from Michaels body as she could get. Knees up, head down, she was crying hard and hopelessly. She looked up when Shane yelled her name, and her face was streaked with black from running mascara, half her Goth white makeup gone. She had on her deaths-head Mary Jane shoes, Claire noticed. She didnt know why that seemed important.

Eve looked completely lost, and Claire slipped off the couch and went to sit beside her. They put their arms around each other. Eve smelled of tears and sweat and some kind of sweet vanilla perfume, and she couldnt seem to stop shaking. Shock. That was what they always said on TV, anyway. Her skin felt cold.

Shhhh, Claire whispered to her. Michaels okay. Its all going to be okay. She didnt know why she said thatit was a lie; it had to be a lie; theyd all seenwhat happenedbut something told her it was the right thing to say. And sure enough, Eves sobbing slowed, then stopped, and she covered her face with shaking hands.

Shane hadnt said anything else. He was still watching his dad, with the kind of intense stare most guys reserved for people theyd like to pound into hamburger. If his dad noticed, he clearly didnt care. He continued to pace, up and down. The guys hed brought with himwalking slabs of muscle in black motorcycle leather, shaved heads and tattoos and everythingwere standing in the corners, arms folded. The one whod killed Michael looked bored as he flipped the knife in his fingers.

Get up, Shanes dad said. Hed stopped pacing, and was standing right in front of his son. Dont you dare give me any crap, Shane. I told you to stand up!

You didnt have to do that, Shane said, and slowly stood, feet slightly apart. Ready to take (or give) a punch, Claire thought. Michael wasnt any threat to you.

Hes one of them. Undead.

I said he wasnt a threat!

And I say that you just dont want to admit your friends turned freak of nature on you. Shanes dad reached out and awkwardly punched Shane on the shoulder. It was supposed to be a gesture of affection, Claire supposed. Shane just rode with the blow. Anyway, done is done. You know why were here. Or do you need a reminder?

When Shane didnt answer, his father reached into his leather jacket and took out a handful of photographs. He threw them at Shane. They bounced off of Shanes chest, and he reflexively tried to catch them, but some drifted free and fell to the wood floor. Some slid over toward Claire and Eve.

They were pictures of Shanes family, Claire guessedShane as a cute little boy, arm around an even tinier little girl with a cloud of curly black hair. A pretty woman standing behind them, and a man she could barely recognize as Shanes dad. No scar, back then. Hair cut short. He lookednormal. Smiling and happy.

There were other pictures, too. Eve was staring at one of them, and Claire couldnt make any sense of it. Something black and twisted and

Shane bent over and snatched it up, fumbling it back into the pile.

His house burned. He got out. His sister wasnt so lucky.

Oh God, that twisted thing was Alyssa. That was Shanes sister. Claires eyes filled up with tears, and she covered her mouth with both hands to hold in a scream, not because what was in the picture was grossit wasbut Shanes own father had made him look at it.

That was cruel. Really cruel. And she knew it wasnt the first time.

Your mother and sister are both dead because of this place, because of the vampires. You didnt forget that, did you, Shane?

I didnt forget! Shane shouted. He kept trying to make the pictures fit into a neat stack, but he didnt look at them at all. I dream about them every night, Dad. Every night!

Good. It was you got this started. Youd better remember that, too. Cant back out now.

Im not backing out!

Then whats all this crap, Things have changed, Dad? Shanes dad mimicked him, and Claire wanted to punch him, never mind that he was about four times her size and probably a whole lot meaner. You hook up with your old friends and next thing I know, you lose your nerve. That thing was Michael, right? The Glass kid?

That one looks like another vamp. Shanes father fixed his red-rimmed glare on Eve, and took a step toward where Claire and Eve were huddled on the floor.

You leave her alone! Shane dropped the pictures into a pile on the couch and jumped into his fathers path, fists clenched. His dads eyebrows raised, and he gave Shane a scar-twisted grin. Shes not a damn vampire. Thats Eve Rosser, Dad. Remember Eve?

Huh, his father said, and stared at Eve for a few seconds before shrugging. Turned into a wannabe, then, just about as bad in my book. What about the kid?

He was talking about Claire.

Im not a kid, Mr. Collins, Claire said, and clambered to her feet. She felt awkward, all strings and wires, nothing working right. Her heart was hammering so hard, it hurt to breathe. I live here. My name is Claire Danvers. Im a student at the university.

Are you. He didnt make it a question. You look a little young.

Sweet sixteen. Mr. Collins smiled again, or tried tothe scar pulled the right side of his mouth down. Never been kissed, Ill bet.

She felt her face go red. Couldnt stop it, or keep herself from looking at Shane. Shanes jaw was set tight, muscles fluttering. He wasnt looking at anything in particular.

Oho! So its like that. Well, you watch yourself around the jailbait, my boy. Still, Shanes dad looked weirdly pleased. My names Frank Collins. Guess you figured out
that Im this ones father, eh? Used to live in Morganville. Ive been gone a few years now.

Since the fire, Claire said, and swallowed hard. Since Alyssa died. AndShanes mom? Because Shane had never said a word about her.

Molly died later, Mr. Collins said. After we left. Murdered by the vamps.

The Dead Girls Dance by Rachel Caine / Young Adult / Fantasy have rating 4.2 out of 5 / Based on25 votes