Home » Pittacus Lore » The Search for Sam
←Home
The search for sam, p.1 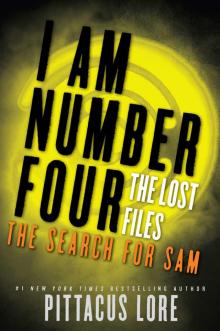 I’m too weak to speak, so I don’t say it out loud. I merely think it. But One can hear me. She can always hear me.

I’m at the bottom of a ravine, my legs twisted beneath me, a boulder pushed uncomfortably between my shoulder blades. A stream laps against my thigh. I can’t see anything because my eyes are closed, and I can’t open my eyes because I don’t have the strength.

But to be honest, I don’t want to open my eyes. I want to give up, to let go.

It means realizing that I have been washed onto a dry riverbank. That the wet I feel on my legs is no river. It’s blood, from a compound fracture of my right leg, the bone now jutting out of my shin.

It means knowing that I’ve been left for dead by my own father, some seven thousand miles from home. That the closest thing I have to a brother, Ivanick, is the one who nearly killed me, pushing me brutally off the edge of the steep ravine.

It means facing the fact that I am a Mogadorian, a member of an alien race bent on the extermination of the Loric people and the eventual domination of Earth.

I clench my eyes shut, desperately trying to hide from the truth.

With my eyes still closed, I can drift off to a sweeter place: a California beach, my bare feet digging into the sand. One sits beside me, looking at me with a smile. This is One’s memory of California, a place I’ve never been. But we’ve shared the memory for so long during that three-year twilight that it feels as much mine as hers.

“I could stay here all day,” I say, the sun warm on my skin.

She looks at me with a soft smile, like she couldn’t agree more. But when she opens her mouth to speak, her words don’t match her expression: they’re harsh, stern, commanding.

My eyes open. I’m in my bed in the volunteers’ sleeping quarters at the aid camp. One stands at the end of the bed.

As in my dream, she’s smiling, but now it isn’t a sweet smile. It’s a teasing smirk.

I laugh, sitting up in bed. I do sleep a lot lately. It’s been seven weeks since I pulled myself out of the ravine and other than some residual weakness in my right leg, I’ve made a full recovery. But my sleep schedule hasn’t adjusted: I’m still sleeping ten hours a night.

I look around the hut and see that all the other beds are empty. My fellow aid-workers have already risen for morning chores. I get to my feet, wobbling briefly on my right leg. One smirks again at my clumsiness.

Ignoring her, I slip into my sandals, throw on a shirt, and exit the hut.

Outside, the sun and humidity hit me like a wall. I’m still sticky from sleep and I’d kill for a shower, but Marco and the other workers are already elbow-deep in morning chores. I missed my chance.

The first hour of the day is devoted to housekeeping around camp: cooking breakfast, doing laundry, cleaning dishes. After that, a jeep will pick some of us up and take us deeper into the village. We’re currently working on a water project there, modernizing the town’s antiquated well. The others will stay behind in the classroom next to camp, teaching the village children. I’ve been trying to learn Swahili, but I’ve got a ways to go before I’ll be ready to teach.

I bust my ass at the camp. It gives me great pleasure to help the villagers. But mostly I work as hard as I do out of gratitude.

After dragging my busted body out of the ravine and a quarter mile through the jungle, I was eventually discovered by an elderly villager. She mistook me for an aid-worker, my cover while tracking down Hannu, Number Three. She went to the camp and returned an hour later with Marco and a visiting doctor. I was brought back to camp on a makeshift stretcher; the doctor reset my leg, stitched it up, and put me in a cast I’ve only recently shed.

Marco gave me a place here, first to recover and now to volunteer, without asking any questions. All he expects in return is that I do my chores and that I fulfill the same labor requirements as the other aid-workers.

I have no idea what story he’s constructed in his head to account for my condition. I can only figure that Marco must have guessed correctly that Ivan was the one who did this to me, based on the fact that Ivan disappeared on the day of my accident without a word to anybody at camp. Perhaps Marco’s generosity is motivated by pity. He may not know exactly what happened, but he knows I was forsaken by family. And since Marco is more or less right, I don’t mind him pitying me.

Besides, the funny thing about being forsaken by my family, by my entire race?

Renovating the village’s well is sweaty, tedious work, but I have an advantage the other workers don’t. I have One. I talk to her throughout my work, and though my muscles get sore and my back aches, the hours fly.

Mostly, she motivates me by teasing me. “You’re doing that wrong. ” “You call that trowelling?” “If I had a body, I’d be done with that by now. ” She mocks my efforts, reclining like a sunbathing lady of leisure at the edge of the work site.

You wanna try this? I bark back in my mind.

Of course I have to be careful not to actually speak to her while I work, not in front of the others. I’d developed a reputation as a bit of a weirdo, for talking to myself in my first few weeks here. Then I learned to silence my side of the conversation with One, to merely think at her, instead of actually speaking. Thankfully my reputation has recovered, and the others no longer look at me like I might be a total lunatic.

That night I have kitchen duty with Elswit, the camp’s most recent addition. We cook githeri, a simple dish of corn and beans. Elswit shucks and scrapes the cobs of corn while I soak and rinse the beans.

I like Elswit. He asks a lot of questions about where I come from and what brought me here, questions I know better than to answer with the truth. Fortunately he doesn’t seem to mind that my replies are either vague or nonexistent. He’s a big talker, always racing ahead to the next question without noticing my silence, always interjecting tidbits about his own life and upbringing instead. From what I’ve gathered, he’s the son of a very wealthy American banker, a man who does not approve of Elswit’s humanitarian pursuits.

Living up to my father’s standards was difficult enough when I was a child, but after my experiences in One’s mind, it became impossible. I had grown soft, had developed sympathies and concerns that I knew would be impossible for my father to understand, let alone tolerate. Elswit and I have a certain amount in common. We’re both disappointments to our fathers.

But I quickly realized the similarities between us don’t stretch that far. Despite Elswit’s claims of “estrangement” from his family, he’s still in touch with his wealthy parents, and still has unlimited access to their wealth. Apparently his father has even arranged for a private plane to pick him up in Nairobi in a few weeks just so Elswit can be back home for his birthday. Meanwhile my dad thinks I’m dead and I can only guess he’s happy about it.

After dinner I have a well-earned shower and get into bed. One’s curled up in a rattan chair in the corner. “Bed? Already?” she teases.

I give the room a once-over. No one’s around, so it’s safe to talk out loud, as long as I keep my voice down. Talking out loud feels more natural than communicating silently.

“I want to get up with the others from here on out. ”

One shoots me a
look.

One frowns and picks at her shirt. Of course I know what’s bothering her.

Her people are out there, earmarked for extinction by my race. And here she is, stuck in Kenya. Moreover, she’s stuck inside my consciousness, disembodied, with no will or agency of her own. If she had her wish, I know she’d be somewhere else—anywhere else—taking up the fight.

“How long are we going to stay here?” she asks, somberly.

I play dumb, pretending I don’t know how she feels, and shrug as I pull up the covers and turn over on my side. “I don’t have anywhere else to be. ”

It’s the night I tried to save Hannu. I’m running from the aid camp into the jungle, towards Hannu’s hut, desperate to get there before Ivan and my father do. I know how this ends—Hannu killed, me left for dead—but in this dream all of the naïve urgency of that night comes back to me, propelling me forward through the vines and brush, the shadows, the animal sounds.

The communicator I swiped from the hut crackles at my hip, an ominous sound. I know the other Mogadorians are closing in.

I have to get there first. I have to.

I arrive at a clearing in the jungle. The hut where Hannu and his Cêpan lived stands right where I remembered it. My eyes struggle to adjust to the darkness.

Then I see the difference.

The hut and the clearing itself are completely overgrown with vines and foliage. Half of the hut’s façade has been blown out, and the roof sags heavily over the missing section of wall. The obstacle course at the edge of the grounds that Hannu must have used for training is so overgrown I can barely tell what it is anymore.

“I’m sorry,” comes a voice from the jungle.

One emerges from the trees.

“You’re sorry for what?” I’m confused, out of breath. And my feet hurt from running.

“You took over. ” The words escape my lips before I even understand what I’m saying. But I can tell from her face I’m right: she took over my consciousness while I slept, leading me out here to the site of Hannu’s death. She’s never done this before. I had no idea she even could do this. But her being is so intimately enmeshed with my own at this point, I shouldn’t be surprised. “You hijacked me. ”

“Well, it didn’t work!” I’m confused, angered by One’s manipulation of my will.

My adrenaline’s up, my heart is racing, and I feel it: the crushing importance of what I tried and failed to do months ago. The threat my people still pose to the Garde and to the rest of the world.

They must be stopped.

I turn away, so One can’t see the doubt on my face.

But we share a mind. There’s no hiding from her.

She’s right, but I push it away, that nagging sense that I have a calling I’m ignoring out here in Kenya. Things were just starting to get good again. I like my life in Kenya, I like that I’m making a difference, and until One dragged me out here to rub my nose in the site of Hannu’s murder, it had gotten easy for me to forget about the coming war.