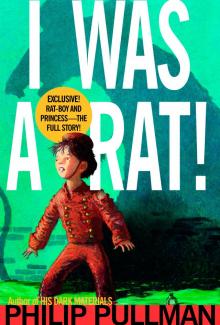 Once Upon a Time in the North

The Scarecrow and His Servant

The Ruby in the Smoke

The Shadow in the North

The Tiger in the Well

THIS IS A BORZOI BOOK PUBLISHED BY ALFRED A. KNOPF

This is a work of fiction. Names, characters, places, and incidents either are the product of the author’s imagination or are used fictitiously. Any resemblance to actual persons, living or dead, events, or locales is entirely coincidental.

Visit us on the Web! randomhousekids.com

Educators and librarians, for a variety of teaching tools, visit us at RHTeachersLibrarians.com

The Library of Congress has cataloged the hardcover edition of this work as follows:

Title: I was a rat! / Philip Pullman

This story is for Jack, Kate, and Rosie.

A Curious and Interesting Case

A Load of Old Cod

“The Wonder of the Age”

A Pair of Old Trams

The Freedom of the Press

Our Children Are in Danger

Scarlet Slippers, or the Practical Value of Craftsmanship

The Princess and the Prison

The Power of the Press

LOVE AT THE BALL

by our Court correspondent

Hunky Prince Richard has found a bride at last!

At midnight last night, the Palace announced the engagement of His Royal Highness Prince Richard to the Lady Aurelia Ashington.

“We are very happy,” said the Prince.

It is understood that the Royal Wedding will be celebrated very soon.

It was like something out of a fairy tale. The charming Prince, the mysterious girl who seemed to vanish into nowhere only to be found by the merest chance…

They met at the Midsummer Ball. To the music of a shimmering waltz, they danced like thistledown, and they only had eyes for each other.

“I’ve never seen him so in love,” said a close friend of the Prince’s. “I think this time it’s the real thing.”

It was certainly fast. By midnight, they were head over heels in love, and it only took another day for the engagement to be made official.

Lady Aurelia—where does she come from? Our reporters investigate the background of the lovely young Princess-to-be, page 9.

One evening as old Joan wrote a letter to her niece and old Bob sat trimming the heels of a pair of tiny scarlet slippers he was making for the love of it, there came a knock at the door.

Bob looked up with a jump. “Was that someone knocking?” he said. “What’s the time?”

The cuckoo clock answered him before Joan could: ten o’clock. As soon as it had finished cuckooing, there came another knock, louder than before.

Bob lit a candle and went through the dark cobbler’s shop to unlock the front door.

Standing in the moonlight was a little boy in a page’s uniform. It had once been smart, but it was sorely torn and stained, and the boy’s face was scratched and grubby.

“What did you say?” said Joan, crowding in behind her husband.

“I was a rat,” the little boy said again.

But the little boy could only say, “I was a rat.”

The old couple took him into the kitchen because the night was cold, and sat him down by the fire. He looked at the flames as if he’d never seen anything like them before.
<
br />   “What should we do?” whispered Bob.

“Feed the poor little soul,” Joan whispered back. “Bread and milk, that’s what my mother used to make for us.”

So she put some milk in a pan to heat by the fire and broke some bread into a bowl, and old Bob tried to find out more about the boy.

“I lost it. I forgot it. I was a rat,” said the boy, as if that explained everything.

The boy looked at his tattered uniform, puzzled.

“Dunno,” he said finally. “Dunno what that means. I expect I am, probably.”

“In service,” said Bob, “that means being someone’s servant. Have a master or a mistress and run errands for ’em. Page boys, like you, they usually go along with the master or mistress in a coach, for instance.”

“ ’Course you did,” said Bob, shifting his chair along as Joan came to the table with the bowl of warm bread and milk.

She put it in front of the boy, and without a second’s pause, he put his face right down into the bowl and began to guzzle it up directly, his dirty little hands gripping the edge of the table.

“What are you doing?” said Joan. “Dear oh dear! You don’t eat like that. Use the spoon!”

The boy looked up, milk in his eyebrows, bread up his nose, his chin dripping.

“He doesn’t know anything, poor little thing,” said Joan. “Come to the sink, my love, and we’ll wash you. Grubby hands and all. Look at you!”

The boy tried to look at himself, but he was reluctant to leave the bowl.

“It’ll still be here when you come back,” said Bob. “I’ve had my supper already, I’ll look after it for you.”

The boy looked wonder-struck at this idea. He watched over his shoulder as Joan led him to the kitchen sink and tipped in some water from the kettle, and while she was washing him, he kept twisting his wet face round to look from Bob to the bowl and back again.

“That’s better,” said Joan, rubbing him dry. “Now you be a good boy and eat with the spoon.”

“I’m surprised they didn’t teach you manners when you was a page boy,” she said.

“Oh, well, rats don’t have manners. Boys do,” she told him. “You say thank you when someone gives you something, see, that’s good manners.”

“Thank you,” he said, nodding hard.

So he sat down, and Bob showed him how to use the spoon. He found it hard at first, because he would keep turning it upside down before it reached his mouth, and a lot of the bread and milk ended up on his lap.

But Bob and Joan could see he was trying, and he was a quick learner. By the time he’d finished, he was quite good at it.

“That’s it. Well done,” said Bob. “Now you come along with me and I’ll show you how to wash the bowl and the spoon.” While they were doing that, Bob said, “D’you know how old you are?”

“Yes. And I got two brothers and two sisters the same age, three weeks.”

The boy thought, and said, “Days.”

“And where’s your mother and father?”

Bob and Joan looked at each other, and they could each see what the other was feeling. The poor little boy was an orphan, and grief had turned his mind, and he’d wandered away from the orphanage he must have been living in.

As it happened, on the table beside him was Bob’s newspaper, and suddenly the little boy seemed to see it for the first time.

He was pointing to a picture of the Prince’s new fiancée. The Prince had met her just the other day, and they’d fallen in love at once, and the royal engagement was the main story of the week.

“She’s going to marry the Prince,” said Bob, “but she ain’t called Mary Jane. That ain’t the kind of name they give princesses.”

“I expect you must have got confused,” said Joan. “And you can’t go anywhere else tonight, that’s for sure. We’ll make you up a bed, my love, and you can sleep here, and we’ll find the proper place for you in the morning.”

“Ah,” he said. “I didn’t know that proper place, else I’d have gone there tonight.”

“Look, we’ll have to call you something,” said Bob.

“Something,” the boy said, as if he were memorizing it.

“I bet there’s a saint of washerwomen too,” said Joan. “Only no one’s ever heard of her.”

Roger was the name they would have called a son of their own, if they’d ever had one.

“Little boy?” said Joan, touching his shoulder. “We got to call you a name, and if you ain’t got one of your own, we’ll call you Roger.”

They made up a bed in the spare room, and Joan took his clothes down to wash. They gave Roger an old nightshirt of Bob’s to wear, and very small he looked in it; but he curled up tight, looking for all the world as though he were trying to wrap a long tail around himself, and went to sleep at once.

“What are we going to do with him?” said Bob, squeezing the page boy uniform through the wringer. “He might be a wild boy. He might have been abandoned as a baby and brung up by wolves. Or rats. I read about a boy like that only last week in the newspaper.”

“Rats don’t have page boy uniforms,” she said. “Nor they don’t speak, either.”

“He could have learned to speak by listening through the walls. And he could have found the uniform on a washing line,” Bob said. “You depend on it, that’s what happened. He’s a wild boy, and he was brung up by rats. You can read about that kind of thing every week in the newspaper.”

Next morning, Joan found the little boy lying in a heap of torn sheets and a terrible tangle of blankets and feathers, fast asleep.

She was going to cry out, because she feared that something had come in at the window and attacked him in the night; but he was sleeping so peacefully among all the destruction that she couldn’t bring herself to wake him, though she was in despair over the damage.

“Come and look,” she said to Bob, and he stood open-mouthed in the doorway.

“It looks like a hen run after a fox has been in,” he said.

There wasn’t a sheet or a blanket that hadn’t been torn into strips. The pillow was burst open, and feathers lay like snow over the whole bed. Even Bob’s old nightshirt lay in tattered strips around t
he thin little body on the mattress.

The boy must have learned his name, because he woke up as soon as she said it and sat up cheerfully.

“Look what you’ve done!” she said. “What were you thinking of?”

He looked around proudly.

“Yes, it was hard, but I done it,” he said. “There’s a lot more that needs chewing and tearing, and I’ll do that for you later.”

“You shouldn’t tear things up!” she said. “I’ve got to sew them all together again! We don’t live like that, tearing things to pieces! Dear oh dear!”

The more she looked, the more damage she saw. It was going to take hours to repair.

Bob said, “Did you do that because you was a rat?”

“Ah, well, that explains it,” the old man said, but Joan was in no mood to listen.

“That’s got nothing to do with it! Never mind what he was, it’s what he is now that matters! You shouldn’t tear things up like this!” she cried, and she took his thin little shoulders and shook him, not hard, but enough to startle him.

“You come down the kitchen with me,” said Bob, “and I’ll tell you a thing or two. But first let’s have some more manners. You’ve upset Joan, so you have to say sorry.”

“Come along,” said Bob, and took him by the hand. He could see Roger fidgeting and guessed what he wanted to do, and took him to the privy just in time. “Whenever you want to do that, you come in here,” he said.