The Witch of Portobello, Page 1 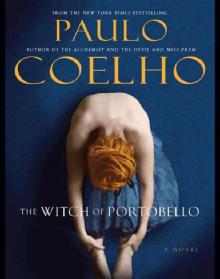 THE WITCH OF PORTOBELLO

a sun who spread light and

warmth wherever he went,

and was an example to all those

who think beyond their horizons

pray for those who turn to you.

No man, when he hath lighted a candle,

putteth it in a secret place,

neither under a bushel, but on a candlestick,

that they which come in may see the light.

Other Books by Paulo Coelho

Before these statements left my desk and followed the fate I eventually chose for them, I considered using them as the basis for a traditional, painstakingly researched biography, recounting a true story. And so I read various biographies, thinking this would help me, only to realize that the biographer's view of his subject inevitably influences the results of his research. Since it wasn't my intention to impose my own opinions on the reader, but to set down the story of "the Witch of Portobello" as seen by its main protagonists, I soon abandoned the idea of writing a straight biography and decided that the best approach would be simply to transcribe what people had told me.

No one lights a lamp in order to hide it behind the door: the purpose of light is to create more light, to open people's eyes, to reveal the marvels around.

No one sacrifices the most important thing she possesses: love.

No one places her dreams in the hands of those who might destroy them.

No one, that is, but Athena.

A long time after Athena's death, her former teacher asked me to go with her to the town of Prestonpans in Scotland. There, taking advantage of certain ancient feudal powers that were due to be abolished the following month, the town had granted official pardons to eighty-one people--and their cats--who were executed in the sixteenth and seventeenth centuries for practicing witchcraft.

According to the official spokeswoman for the Barons Courts of Prestoungrange & Dolphinstoun: "Most of those persons condemned...were convicted on the basis of spectral evidence--that is to say, prosecuting witnesses declared that they felt the presence of evil spirits or heard spirit voices."

There's no point now in going into all the excesses committed by the Inquisition, with its torture chambers and its bonfires lit by hatred and vengeance; however, on our way to Prestonpans, Edda said several times that there was something about that gesture which she found unacceptable: the town and the Fourteenth Baron of Prestoungrange & Dolphinstoun were "granting pardons" to people who had been brutally executed.

"Here we are in the twenty-first century, and yet the descendants of the real criminals, those who killed the innocent victims, still feel they have the right to grant pardons. Do you know what I mean, Heron?"

I did. A new witch hunt is starting to gain ground. This time the weapon isn't the red-hot iron, but irony and repression. Anyone who happens to discover a gift and dares to speak of their abilities is usually regarded with distrust. Generally speaking, their husband, wife, father, or child, or whoever, instead of feeling proud, forbids all mention of the matter, fearful of exposing their family to ridicule.

Before I met Athena, I thought all such gifts were a dishonest way of exploiting people's despair. My trip to Transylvania to make a documentary on vampires was also a way of proving how easily people are deceived. Certain superstitions, however absurd they may seem, remain in the human imagination and are often used by unscrupulous people. When I visited Dracula's castle, which has been reconstructed merely to give tourists the feeling that they're in a special place, I was approached by a government official who implied that I would receive a "significant" (to use his word) gift when the film was shown on the BBC. In the mind of that official, I was helping to propagate the myth and thus deserved a generous reward. One of the guides said that the number of visitors increased each year, and that any mention of the place would prove positive, even a program saying that the castle was a fake, that Vlad Dracula was a historical figure who had nothing to do with the myth, and that it was all merely a product of the wild imaginings of one Irishman [Editor's note: Bram Stoker], who had never even visited the region.

I knew then that, however rigorous I was with the facts, I was unwittingly collaborating with the lie; even if the idea behind my script was to de-mythologize the place, people would believe what they wanted to believe; the guide was right, I would simply be helping to generate more publicity. I immediately abandoned the project, even though I'd already spent quite a lot of money on the trip and on my research.

And yet my journey to Transylvania was to have a huge impact on my life, for I met Athena there when she was trying to track down her mother. Destiny--mysterious, implacable Destiny--brought us face-to-face in the insignificant foyer of a still more insignificant hotel. I was witness to her first conversation with Deidre--or Edda, as she likes to be called. I watched, as if I were a spectator of my own life, as my heart struggled vainly not to allow itself to be seduced by a woman who didn't belong to my world. I applauded when reason lost the battle, and all I could do was surrender and accept that I was in love.

That love led me to see things I'd never imagined could exist--rituals, materializations, trances. Believing that I was blinded by love, I doubted everything, but doubt, far from paralyzing me, pushed me in the direction of oceans whose very existence I couldn't admit. It was this same energy which, in difficult times, helped me to confront the cynicism of journalist colleagues and to write about Athena and her work. And since that love remains alive, the energy remains, even though Athena is dead, even though all I want now is to forget what I saw and learned. I could only navigate that world while hand in hand with Athena.

These were her gardens, her rivers, her mountains. Now that she's gone, I need everything to return as quickly as possible to how it used to be. I'm going to concentrate more on traffic problems, Britain's foreign policy, on how we administer taxes. I want to go back to thinking that the world of magic is merely a clever trick, that people are superstitious, that anything science cannot explain has no right to exist.

When the meetings in Portobello started to get out of control, we had endless arguments about how she was behaving, although I'm glad now that she didn't listen to me. If there is any possible consolation in the tragedy of losing someone we love very much, it's the necessary hope that perhaps it was for the best.

I wake and fall asleep with that certainty; it's best that Athena left when she did rather than descend into the infernos of this world. She would never have regained her peace of mind after the events that earned her the nickname "the Witch of Portobello." The rest of her life would have been a bitter clash between her personal dreams and collective reality. Knowing her as I did, she would have battled on to the end, wasting her energy and her joy on trying to prove something that no one, absolutely no one, was prepared to believe.

Who knows, perhaps she sought death the way a shipwrecked victim seeks an island. She must have stood late at night in many a Tube station, waiting for muggers who never came. She must have walked through the most dangerous parts of London in search of a murderer who never appeared or perhaps tried to provoke the anger of the physically strong, who refused to get angry.