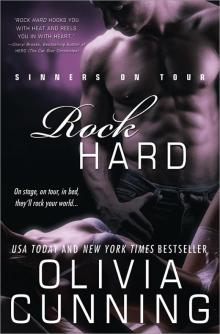 Jessica was the happiest woman on the planet. Life could not have been more perfect. She snuck up behind Sed, wrapped her arms around his neck, and kissed his ear. “Hey, baby, guess what?”

“What?” he said absently.

She peeked around his shoulder to find him scowling at a stack of invoices.

His scowl deepened in confusion. “You got in? Got in what?”

She pulled the acceptance letter from her back pocket and snapped it open in front of him. This would wipe the scowl from his gorgeous face.

While he read, she gazed at her recently acquired engagement ring. After all her hard work in school, her dreams were finally becoming a reality. Having a hunky rising-star rock vocalist as her fiancé was the frosting on her Pop Tart.

“Law school?” His deep voice rumbled through his back against her chest.

“Yeah. Isn’t it great? I’m so excited. We have to go out and celebrate. ” She kissed his temple and squeezed him. “I’ll go put on a skirt. We’ll go sightseeing. I want you to make love to me on a crowded street. Maybe Rodeo Drive. Or Hollywood Boulevard. What do you think?”

“I can’t afford to put you through law school, Jess. I can’t even afford to fix the transmission in the fuckin’ tour bus. ” He tossed her acceptance letter on his stack of invoices.

“Don’t worry. ” She pulled out a second letter. Her financial aid award letter. “Scholarships, grants, waivers. I only have to come up with $3,000 a semester. ”

Sed shoved his chair away from the table and went to open the banged-up refrigerator. Finding it empty, he closed it again. “I don’t have $3,000, Jessica. ”

He didn’t get it. This was her dream. He was encouraged to pursue his. Why wasn’t she? Even though Sed’s band, Sinners, would probably never make it as big as their front man envisioned, she believed in him. Was it so much to ask that he believed in her, too?

“I don’t expect you to pay for it, Sed. I’ll find a way. I just want you to be happy for me. Congratulate me. Something. This is the most important thing that’s ever happened to me. ”

He leaned back against the counter and crossed his arms over his chest. For a second, she was struck by how attractive he was. Those broad shoulders, bulging muscles, narrow hips. Black hair, blue eyes. A face that belonged in movies. And then he opened his mouth. “I’m the most important thing that’s ever happened to you. And you aren’t going. ”

“You’re not going to law school. You’ll be far too busy keeping me entertained in the bedroom. When that gets boring, you’ll pop out five or six kids and take care of them while I tour with the band and make us all rich and famous. ”

That was his big scheme for her life? Was he fucking kidding her? “I’ve dreamt of being a lawyer since I was a little girl, Sedric. I am going to law school. And you’re not telling me how to live my life. ”

She stared at him in disbelief. “You did not just say that. ”

He scoffed, looking amused. “You don’t mean that. ”

That cocksure attitude of his—the one that had attracted her to him in the first place—made her grit her teeth. She yanked the ring off her finger and flung it at him. It hit him in the chest and he caught it against his body with his hand.

“There! Go hock that cheap piece of shit, fix your precious tour bus, and make yourself famous with your stupid band, you asshole. ”

He stared at her in disbelief.

His blue eyes widened. “You’re breaking up with me?” For the first time in their four months together, Jessica saw a dent in his armor of self-assurance. “No one has ever broken up with me. Ever. ”

Fuckin’ A, he totally missed the point. “What did you expect? That I’d be happy as your little toy?”

His cocky grin returned. “Well, aren’t you? You never complain in the bedroom. ”

She had no complaints in the bedroom. Their bodies were made for each other. Their sexual appetites perfectly in sync. It was everything else that didn’t work between them. “I’m leaving, Sed. ”

She hesitated. This was his last chance to make things right between them. All he had to do was admit he was wrong to try to control her life. Wrong to think of her as an object instead of a person. A person he supposedly loved enough to be his wife.

She waited. Wanting him. God, she always wanted him. As overbearing and arrogant as he was, she wanted him. She did not, however, need him.

“I don’t think you will. ” He chuckled. “You’re not strong enough to leave me. ”

Jessica snatched her acceptance letter off the table and proved him wrong.

Jessica’s confident smile faded as the grade on her final paper burned its ugly red image onto her retina.

The note scrawled beneath Jessica’s inconceivable grade read, Perhaps next time you will consider completing your paper as assigned, Ms. Chase.

“Check it out,” the guy seated next to her said. He leaned way into her personal space and tapped his paper with the back of his fingertips. “The Ice Queen gave me an A minus. What did you get, Wonder Brain? The Pulitzer prize for best final paper evah?”

Jessica hurriedly stuffed her failing (failing?) paper into her leather folio. “They don’t give Pulitzers for that. ”

“Duh. That was a joke. So, are you tired of rejecting me yet?”

She climbed from her chair, her knees shaky. An F? How? How? There had to be some mistake.

She headed toward the podium at the front of the room where Dr. Ellington stood. Ellington always looked perfectly put together. Her sleek blonde hair, cut in an ear-length bob, swayed slightly as she placed papers into her briefcase. Her trim navy blue skirt suit was worth more than Jessica’s car. Ellington might have been considered pretty if she didn’t look so shrewd. And intimidating.

Someone grabbed Jessica’s arm. She turned to find the guy with the A minus looking down at her hopefully. Handsome and neat in his blue Polo shirt and Dockers, he raked a hand through his sandy brown hair. “Join me for coffee?”

“No, uhh…” Her eyebrows drew together. “What’s your name again?”

His pretty-boy face fell. “Doug. I’ve sat next to you for four months and you don’t remember my name?”

Well, lots of guys sat next to her. She couldn’t be expected to remember their names when she had zero interest in them.

“Sorry. Doug. I can’t talk right now. I need to speak to Dr. Ellington about something important. ”

“Of course not. You’re never interested in anyone. You only date assholes, am I right?”

Her ex-fiancé’s image flittered through her mind’s eye. Sedric Lionheart definitely qualified as an asshole. But they’d split two years ago, so she no longer dated assholes. Or anyone, for that matter. “What kind of question is that?”

“Nice, smart, and beautiful. ” He ticked his words off on three fingers. “The recipe for a woman who only dates assholes. ”

Jessica’s eyes narrowed. “Then why do I kee
p turning you down?”

Doug winced and covered his heart with one hand. “Ouch. The beauty has claws. ” He chuckled. “I’ll meet you outside. ”

She shook his hand off her arm and continued to the podium. When Jessica stopped in front of Dr. Ellington, the woman smiled like a snake in bronze lipstick.

“Do you have a moment, professor? I’d like to talk to you about my grade. ”

“Nothing to talk about, Chase. ”

“I don’t understand how you could have…” Jessica swallowed and forced the next word out. “…failed me. My paper is good. ” She straightened her spine, grasping for self-confidence she didn’t feel. “Excellent. ”

Ellington shrugged. “Maybe, but as I clearly indicated, you didn’t follow directions. ”

That wasn’t true. Exactly. “I dissected the assigned case. Reviewed all the court documents. The associated literature. Tackled the defense’s position and the plaintiff’s. Evaluated the verdict and the effects the case had on future cases. ”

“You also determined that the defense took the wrong position and proceeded to rebuild the case in some egotistical attempt to prove you could win. ”

Egotistical? Jessica opened her mouth. Closed it again. Took a gasping breath. “But the defense lost because they approached the case from the wrong standpoint. If they’d have followed my strategy—”

“Ms. Chase, you are a second year law student. Do you really think you can win a case that professional lawyers couldn’t?”

“Yes, actually, I do. If you’d take another look—”

Dr. Ellington lifted a hand to silence her. “The grade stands, Chase. You need a serious attitude adjustment. ” She smiled coldly. “Have a nice summer. ”

Jessica caught her arm. “Wait. I’ll rewrite it. Take out every reference to my alternate strategy. ”

“You should have done it right the first time. ” Ellington brushed her hand aside. “Your pack of male admirers is waiting for you. ” She nodded toward the door. “Maybe they can help you with your little problem. ”

Jessica glanced over her shoulder at the six or seven guys watching her from the doorway. What did they have to do with anything? She covered her forehead with one hand, fighting tears.

“Oh, don’t cry, pretty little Jessica. ” Ellington gave her a pitying pout. “You wouldn’t want to make my day now, would you?” She scraped her briefcase off the podium and turned. She stopped abruptly so she didn’t careen into the Dean of Students, Dr. Taylor, who had just entered the door behind her.

Taylor kind of looked like Perry Mason, except, well, old. “Can I see you in my office for a few minutes?”

Taylor then turned his attention to Jessica. “You look upset, Jessica. Everything okay?”

No, everything was decidedly not okay. She glanced at Dr. Ellington, somehow feeling it was wrong to complain about the woman’s grading practices to her boss. Maybe Jessica had deserved to fail. She hadn’t followed the assignment’s directions. Instead, she’d tried to impress her professor with her brilliant strategy. She’d obviously failed at that.

“If you’d like to discuss something with me in private, my door is always open. ”

Kind of him to offer, she thought. She glanced up at him to find him staring at her chest. He licked his lips as his eyes drifted up her throat and then back to her breasts. “Yes, my door is always open for you, Jessica Chase. ”

Ellington grabbed his arm. “Let’s go have that meeting now. ”

Before Jessica could flinch away from his touch, he turned and strode toward the door with Ellington on his heels.

Jessica shuffled out of the building, the chattering of her following classmates background noise. She’d probably have to retake Ellington’s class next year. As a third-year student. The ultimate humiliation for the head of the class. Or she had been at the top of the class. Now? She was probably at the bottom.

Exodus End
One Night with Sole Regret
Sinners on Tour