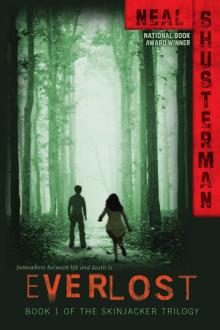 On the Way to the Light… On a hairpin turn, above the dead forest, on no day in particular, a white Toyota crashed into a black Mercedes, for a moment blending into a blur of gray.

In the front passenger seat of the Toyota sat Alexandra, Allie to her friends.

She was arguing with her father about how loud the radio should be playing. She had just taken off her seat belt to adjust her blouse.

In the center backseat of the Mercedes, dressed for his cousin’s wedding, sat Nick, trying to eat a chocolate bar that had been sitting in his pocket for most of the day. His brother and sister, who sandwiched him on either side, kept intentionally jostling his elbows, which caused the molten chocolate to smear all over his face. As it was a car meant for four, and there were five passengers, there was no seat belt for Nick.

Also on the road was a small piece of sharp steel, dropped by a scrap metal truck that had been loaded to the brim. About a dozen cars had avoided it, but the Mercedes wasn’t so lucky. It ran over the metal, the front left tire blew, and Nick’s father lost control of the car.

As the Mercedes careened over the double yellow line, into oncoming traffic, both Allie and Nick looked up and saw the other’s car moving closer very quickly. Their lives didn’t quite flash before them; there was no time. It all happened so fast that neither of them thought or felt much of anything. The impact launched them forward, they both felt the punch of inflating air bags—but at such a high speed, and with no seat belts, the air bags did little to slow their momentum. They felt the windshields against their foreheads, then in an instant, they had each passed through.

The crash of splintering glass became the sound of a rushing wind, and the world went very dark.

Allie didn’t know what to make of all this quite yet. As the windshield fell behind her, she felt herself moving through a tunnel, picking up speed, accelerating as the wind grew stronger. There was a point of light at the end of the tunnel, getting larger and brighter as she got closer, and there came a feeling in her heart of calm amazement she could not describe.

But on the way to the light, she hit something that sent her flying off course.

She grabbed at it, it grunted, and for an instant she was aware that it was someone else she had bumped—someone about her size, and who smelled distinctly of chocolate.

Both Allie and Nick went spinning wildly, crashing out of the blacker-than-black walls of the tunnel, and as they flew off course, the light before them disappeared. They hit the ground hard, and the exhaustion of their flight overcame them.

Their sleep was dreamless, as it would be for a long, long time.

Arrival in Everlost The boy had not been up to the road since forever. What was the point? The cars just came and went, came and went, never stopping, never even slowing. He didn’t care who passed by his forest on their way to other places. They didn’t care about him, so why should he?

When he heard the accident he was playing a favorite game; leaping from branch to branch, tree to tree as high from the ground as he could get. The sudden crunch of steel was so unexpected, it made him misjudge the next branch, and lose his grip. In an instant he was falling. He bounced off one limb, then another and then another, like a pinball hitting pegs. It didn’t hurt, all this banging and crashing. In fact he laughed, until he had passed through all the branches, and all that remained was a long drop to the ground.

He hit the earth hard—it was a fall that would have certainly ended his life, had circumstances been different, but instead the fall was nothing more than a quicker way to reach the forest floor.

He picked himself up and got his bearings, already hearing the echoes of commotion up on the road. Cars were screeching to a halt, people were yelling.

He hurried off in the direction of the sounds, climbing the steep granite slope that led up to the road. This wasn’t the first accident on this treacherous strip of highway; there were many—a few every year. Long ago a car had even left the road, flown like a bird, and landed smack on the forest floor. Nobody came with it, though. Oh, sure there had been people in the car when it had crashed, but they got where they were going even before the boy came to inspect the wreck.

This new wreck was bad. Very bad. Very messy. Ambulances. Fire trucks. Tow trucks. It was dark by the time all the trucks were gone. Soon there was nothing but broken glass and bits of metal where the accident had been. He frowned. The people got where they were going.

Resigned, and a little bit mad, the boy climbed back down to his forest.

Who cared anyway? So what if no one else came? This was his place. He would go back to his games, and he’d play them tomorrow and the next day and the next, until the road itself was gone.

It was as he reached the bottom of the cliff that he saw them: two kids who had been thrown from the crashing cars, over the edge of the cliff. Now they lay at the base of the cliff, in the dirt of the forest. At first he thought the ambulances might not have known they were here—but no; ambulances always know these things. As he got closer, he could see that neither their clothes, nor their faces bore any sign of the accident. No rips, no scratches. This was a very good sign! The two seemed to be about fourteen years old—a few years older than he was—and they lay a few feet apart from one another, both curled up like babies. One was a girl with pretty blond hair, the other a boy who kind of looked Chinese, except for his nose, and his light reddish-brown hair. Their chests rose and fell with a memory of breathing. The boy smiled as he watched them, and made his own chest rise and fall in the same way.

As the wind passed through the trees of the forest, not rustling them in the least, he waited patiently for his playmates to awake.

Allie knew she was not in her bed even before she opened her eyes. Had she fallen onto the floor in the middle of the night again? She was such a thrasher when she slept. Half the time she woke up with the sheets tugged off the mattress and wrapped around her like a python.

Her eyes opened to clear sunlight streaming through the trees, which was not unusual except for the fact that there was no window for the light to shine through. There was no bedroom either; only the trees.

She closed her eyes again, and tried to reboot. Human brains, she knew, could be like computers, especially in the time that hung between sleep and wakefulness.

Sometimes you said strange things, did even stranger things, and once in a while you couldn’t figure out exactly how you got where you got.

She wasn’t bothered by this. Not yet. She simply concentrated, searching her memory for a rational explanation. Had they gone camping? Was that it? In a moment the memory of falling asleep beneath the stars with her family would come exploding back into her mind. She was sure of it.

Something about that word made her uneasy.

She opened her eyes again, sitting up this time. There were no sleeping bags, no campsite, and Allie felt strange, like someone had filled her head with helium.

There was someone else a few feet away, sleeping on the ground, knees to chest.

A boy with a bit of an Asian look about him. He seemed both familiar and unfamiliar at the same time, as if they had once met, but only in passing.

Then an icy wave of memory flowed over her.

Flying through a tunnel. He was there. He had bumped her, the clumsy oaf!

“Hello!” said a voice behind her, making her jump. She turned sharply and saw another, younger boy sitting cross-legged on the ground. Behind him was a granite cliff that extended high out of sight.

This boy’s hair was unkempt, and his clothes were weird — sort of too heavy, too tight, and buttoned way too high. He also had more freckles than s
he had ever seen on a human being.

“Who are you?” Allie asked.

Instead of answering, he pointed to the other kid, who was starting to stir.

The other kid sat up, blinking in the light. He had brown stuff on his face.

Dried blood! thought Allie. No. Chocolate. She could smell it.

“This is freaky,” the chocolate boy said. “Where am I?”

Allie stood up and took a good look around. This wasn’t just a grove of trees, it was an entire forest. “I was in the car, with my dad,” Allie said aloud, forcing the scrap of memory to her lips, hoping that would help to drag the rest of it all the way back. ”

“We were on a mountain road, above a forest. …” Only this wasn’t the forest they had driven past. That forest was full of tall dead tree trunks, with stubby, rotting limbs. “A dead forest,” Dad had said from the drivers seat, pointing it out. “It happens like that sometimes. A fungus, or some other kind of blight—it can kill acres at a time. ”

Then Allie remembered the squealing of tires, and a crunch, and then nothing.

She began to get just a little bit worried.

“Okay, what’s going on here,” she demanded of the freckled kid, because she knew Chocolate Boy was as clueless as she was.

Then Chocolate Boy pointed at her. “I know you! You bumped into me!”

The freckled kid came between them. “C’mon, stop talking about that. ” He started bouncing excitedly on the balls of his feet. “We got stuff to do!”

Allie crossed her arms. “I’m not doing anything until I know what’s going on — “

and then it all came crashing back to her with the fury of— “—A head-on collision!”

“Yes!” said Chocolate Boy. “I thought I dreamed it!”

“It must have knocked us out!” Allie felt all over her body. No broken bones, no bruises—not even a scratch. How could that be? “We might have a concussion. ”

“Fine. I’m Allie. ” Nick tried to wipe the chocolate from his face, but without soap and water it was a lost cause. They both turned to the freckled kid. “You got a name?” Allie asked.

Allie ignored him, since he was starting to become a nuisance, and turned to Nick. “We must have been thrown clear of the accident, and over the cliff. The branches broke our fall. We have to get back up to the road!”

“What would you want to go up there for?” the freckled kid asked.

“They’ll be worried about us,” Nick said. “My parents are probably searching for me right now. ”

And then suddenly Allie realized something. Something she wished she hadn’t.

“Maybe they won’t,” she said. “If the accident was bad enough…”

She couldn’t say it aloud, so instead, Nick did.

“We could be the only survivors?”

Allie closed her eyes, trying to chase the very idea away. The accident had been bad, there was no question about it, but if they came through it without a scratch, then her father must have as well, right? The way they made cars nowadays, with crumple zones, and air bags everywhere. They were safer than ever.