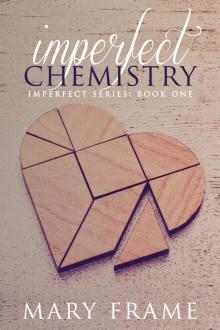 Cover and e-book design by Regina Wamba of MaeIDesign and Photography www.maeidesign.com

This book is a work of fiction. The names, characters, places, and incidents are products of the writer’s imagination and have been used fictitiously and are not to be construed as real. Any resemblance to persons, living or dead, actual events, locales or organizations is entirely coincidental.

All rights are reserved. No part of this book may be used or reproduced in any manner without written permission from the author.

For being my perfectly

I believe that a scientist looking at nonscientific problems is just as dumb as the next guy.

There are many theories that attempt to explain why humans cry in response to heightened emotions. One states that weeping serves as a signaling function, letting other humans know the emotional condition being experienced with the hopes of contriving an altruistic response in the viewer. Another theory is that crying serves a biochemical function, releasing toxins from the body and reducing stress. Some scientists have found that tears may contain a chemosignal, and when men sniff women’s tears, they display reduced levels of testosterone and sexual arousal.

None of these theories explain why I, a twenty-year-old female, experience extreme anxiety and a desperate desire to get as far away as possible when people cry in my general vicinity.

“Are you even listening to me?”

Today’s client is Freya Morgan, a sophomore at the university, who recently dissolved a relationship. She’s pre-law, and her file indicates a fairly high GPA. I have hopes she will be more logical than emotional. She hasn’t cried yet, but I’m 83% certain she will. Studies have shown that women cry thirty to sixty-four times per year. That’s approximately once every twelve days, on the low side.

“Yes.” I glance at my notes. “You engaged in coitus with your partner and then he stopped communicating with you.”

She sits up slightly from the position she threw herself into when she entered the room, lying across the small sofa, and offers me a frown that puts a wrinkle in her forehead. She’s shorter than me, small enough to lie down on the couch that’s only about five feet long.

“Right.” She nods after a small hesitation and then lies back down with a gusty sigh. “Where was I?”

“He stopped communicating with you.”

“Yes!” She punctuates the word with a finger thrust in my direction although her gaze remains fixed on the ceiling above her. “But that’s not all. When he wouldn’t answer my texts, I went to his dorm and guess who was in there?”

I tilt my head, wondering, is that a rhetorical question?

It must be, because she’s speaking again quickly. “Liz. Liz was in there and she was moaning and screaming like she was giving birth to a goat. One with horns.”

“That’s an interesting metaphor. Perhaps his advances were unwanted?”

I’m amazed at how quickly she goes from indignant to depressed. I jot that down in my notes. Bipolar?

“Hell, no, Liz is a total skank. She sleeps with anyone who has a pulse, guys, girls, whatever.”

Whatever? I wonder what that encapsulates, but think it’s best to stick to the topic at hand. “Okay. What about the gentleman in question, Cameron?” I clarify the name she stated earlier.

“Did you confront him regarding his behavior?”

“And he’s a douchebag. He tried to deny it, but then I showed him the video.”

“You obtained video of his transgression?”

“Yeah.” She inspects her fingernails. “On my phone. They were so loud they didn’t hear me open the door. I got the key from the RA.”

“How did you…” I’m interested in how she accomplished such a feat, but it’s not as important as why she’s here in the first place. I have to stay on track. This exact topic was discussed with me previously by Duncan, the head of the psychology department and the person overseeing the progress on my experiment. Or lack thereof.

I didn’t necessarily want to work in the peer counseling clinic, but one of the stipulations of the grant required that I put in the same number of hours as the graduate students. I was assured that my doctorate in immunology and pathogens more than made me suitable for the position, but since I started, I’ve been counseled on my own behavior nearly every day. I was told to use this as an opportunity to examine emotions and understand the underlying impetus of the passions people experience, since that is the basis of the grant: emotion as a pathogen, how emotion is transmitted from one person to another.

So far, it’s not working.

I’m supposed to have an experiment proposal prepared by the end of next week and I don’t even have a hypothesis. I have nothing.

If I’m unable to perform successfully, I will lose the grant, which means I will lose my place at the university where I’ve been studying since I was thirteen. Where would I go? My life is here. My family is here. This is all I’ve known.

Pulling myself away from negative thoughts that don’t help my current situation in the least, and are therefore illogical, I clear my throat of the lump that’s suddenly formed there and ask, “How did he respond when you showed him the video?”

“He said he didn’t realize we were exclusive. Can you believe that bullshit?”

“Did you speak with him about exclusivity before the incident with Liz?” I ask.

There’s silence for a moment and I try to think about a possible solution. One technique I’ve learned involves having the patient come up with the answer. If an individual becomes part of the problem solving, they are more likely to be engaged in the process.

“What do you think would make you feel better in this situation?” I ask. “Have you considered any possible solutions?”

Her eyes light up and she swings her legs around to place her feet on the floor, leaning towards me and lowering her voice an octave. “I’ve heard there’s this guy on campus who will do anything for a fee. He runs some gambling thing and a drug cartel or whatever. Do you know who it is? I think he’s, like, the son of a mob boss or something? I was thinking about hiring him to beat up Cameron.”

I frown. “I’ve never heard of him, and I’m not sure violence is the answer.”

She groans and covers her face with her hands. “You’re right. I’m so stupid.”

“You’re not stupid,” I assure her, but since I don’t really know her, I’m not sure what else I can say to convince her of that.

There’s another snort and a snuffle and since her face is still covered with her hands, all I can see are fingers and her shoulder-length light brown hair twitching as she shudders and squeaks. For a brief flickering moment I wonder if she’s laughing, but no. She’s crying.

Oh, no. Panicked, I stand up and reach for the tissue box on the coffee table next to my chair. I try to han
d it to her but she’s not looking at me, her hands are still over her face and her shoulders are shaking with muffled tears.

I have to get her to stop crying. I shuffle through the index of knowledge in my brain and pull out items at random.

“You can do so much better.”

Not helping. If anything, it’s getting worse.

“By letting his actions affect you this way, you’re giving up control of yourself to him. Don’t let him have that kind of power. No one can hurt you unless you let them.”

The crying is turning to sobbing.

“You know,” I try, keeping my voice calm and monotonous, “there is an evolutional explanation behind the social patterns Cameron is exhibiting. Biologically, our urges are based on the continuance of the species. With this in mind, logically, the male can inseminate multiple females with hardly any responsibility or time constraints, while females are required to endure a nine-month gestation period followed by nearly eighteen years of preparing their offspring to be self-sufficient. From a purely scientific standpoint, this explains both male and female behavior: why males feel it necessary to ‘sleep around’ like Cameron is doing, and why females are typically more selective. Women want someone who will take care of them and their progeny, hence the attraction to men with money and power. They also want someone with healthy genetic features that will pass onto their offspring, which explains physical attraction.”

The snuffling slows down and her hands move away from her face, revealing red-rimmed brown eyes and a blotchy face. She sits up and takes the box of tissues I’m holding out in front of me like it will shield me from the torrent of emotions.

I breathe a sigh of relief. Duncan is wrong about my counseling style. Logic and reason can make people feel better. Not everyone needs coddling and emotional support. I sit down on the coffee table to place us at eye level.

She blows her nose before speaking and drops the dirty tissue on the couch. My eyes can’t help but be drawn to it. Now I’ll need to disinfect the couch.

“Understanding why cavemen felt it was okay to beat a woman with their club and drag her off to their cave while they went out and banged other cavewomen does not help me understand why my ass-wipe of a boyfriend cheated on me.” She sounds angry. I drag my eyes from the mucous-filled Kleenex to her face. She looks angry, too.

This isn’t good. I have enough things to worry about without having yet another complaint lodged against me.

“If he was an ass-wipe as you say, why are you upset? Aren’t you relieved he will no longer penetrate you?”

“No, no.” She shakes her head and eyes me warily. “I heard you, but don’t you…haven’t you ever liked someone who didn’t like you back? Haven’t you ever had your heart broken?”

“My experiences are irrelevant. I am here to help you.” One of the books I read indicated that during an emotional session, physical contact can be helpful. Despite my personal inclinations to the contrary, I reach out and put my hand over hers. “It really is for the best. Plus, if he’s engaging in sexual relationships with others, you run a serious risk of contracting a sexually transmitted or venereal disease. Have you been tested?”

She leans back slightly, pulling her hand out from under mine, eyes shifting to the side. “Um, no, but—”

“One in four sexually active people have herpes.”

“And that’s nothing compared to human papillomavirus. Eighty percent,” I continue.

“Okay,” she says, nodding and putting the tissue box on the table next to me, her eyes focused on her hands. She takes a deep breath and meets my gaze. “You know what, you’re absolutely right.”

I smile. Of course I am.

“Thank you,” she says and then glances behind me to the clock on the wall. “Thank you so much for all your help, and you’ve really been, uh, helpful, but I gotta go. I have statistics in ten minutes in the Geiger Building, and I really don’t want to be late for that.” She grabs her bag from the floor and fumbles it over her shoulder while stepping away from me and hurrying towards the exit. “Thanks again,” she says, as she shuts the door gently behind her.

I look at the clock after she leaves. I have another two hours before the clinic closes. The whole session took less than thirty minutes. I briefly wonder if Freya was prevaricating when she left so abruptly, but then dismiss the thought. Why would she lie?

Imperfect Chemistry by Mary Frame / Humor / Romance & Love have rating 4.5 out of 5 / Based on18 votes