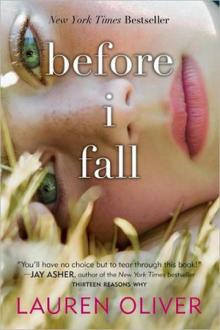 They say that just before you die your whole life flashes before your eyes, but that’s not how it happened for me.

To be honest, I’d always thought the whole final-moment, mental life-scan thing sounded pretty awful. Some things are better left buried and forgotten, as my mom would say. I’d be happy to forget all of fifth grade, for example (the glasses-and-pink-braces period), and does anybody want to relive the first day of middle school? Add in all of the boring family vacations, pointless algebra classes, period cramps, and bad kisses I barely lived through the first time around…

The truth is, though, I wouldn’t have minded reliving my greatest hits: when Rob Cokran and I first hooked up in the middle of the dance floor at homecoming, so everyone saw and knew we were together; when Lindsay, Elody, Ally, and I got drunk and tried to make snow angels in May, leaving person-sized imprints in Ally’s lawn; my sweet-sixteen party, when we set out a hundred tea lights and danced on the table in the backyard; the time Lindsay and I pranked Clara Seuse on Halloween, got chased by the cops, and laughed so hard we almost threw up—the things I wanted to remember; the things I wanted to be remembered for.

Instead, I thought of Vicky Hallinan.

Specifically, I thought of the time in fourth grade when Lindsay announced in front of the whole gym class that she wouldn’t have Vicky on her dodgeball team. “She’s too fat,” Lindsay blurted out. “You could hit her with your eyes closed. ” I wasn’t friends with Lindsay yet, but even then she had this way of saying things that made them hilarious, and I laughed along with everyone else while Vicky’s face turned as purple as the underside of a storm cloud.

That’s what I remembered in that before-death instant, when I was supposed to be having some big revelation about my past: the smell of varnish and the squeak of our sneakers on the polished floor; the tightness of my polyester shorts; the laughter echoing around the big, empty space like there were way more than twenty-five people in the gym.

The weird thing is that I hadn’t thought about that in forever. It was one of those memories I didn’t even know I remembered, if you know what I mean. It’s not like Vicky was traumatized or anything. That’s just the kind of thing that kids do to each other. It’s no big deal. There’s always going to be a person laughing and somebody getting laughed at. It happens every day, in every school, in every town in America—probably in the world, for all I know. The whole point of growing up is learning to stay on the laughing side.

Vicky wasn’t very fat to begin with—she just had some baby weight on her face and stomach—and before high school she’d lost that and grown three inches. She even became friends with Lindsay. They played field hockey together and said hi in the halls. One time, our freshman year, Vicky brought it up at a party—we were all pretty tipsy—and we laughed and laughed, Vicky most of all, until her face turned almost as purple as it had all those years ago in the gym.

That was weird thing number one.

Even weirder than that was the fact that we’d all just been talking about it—how it would be just before you died, I mean. I don’t remember exactly how it came up, except that Elody was complaining that I always got shotgun and refusing to wear her seat belt. She kept leaning forward into the front seat to scroll through Lindsay’s iPod, even though I was supposed to have deejay privileges. I was trying to explain my “greatest hits” theory of death, and we were all picking out what those would be. Lindsay picked finding out that she got into Duke, obviously, and Ally—who was bitching about the cold, as usual, and threatening to drop dead right there of pneumonia—participated long enough to say she wished she could relive her first hookup with Matt Wilde forever, which surprised no one. Lindsay and Elody were smoking, and freezing rain was coming in through the cracked-open windows. The road was narrow and winding, and on either side of us the dark, stripped branches of trees lashed back and forth, like the wind had set them dancing.

Elody put on “Splinter” by Fallacy to piss Ally off, maybe because she was sick of her whining. It was Ally’s song with Matt, who had dumped her in September. Ally called her a bitch and unbuckled her seat belt, leaning forward and trying to grab the iPod. Lindsay complained that someone was elbowing her in the neck. The cigarette dropped from her mouth and landed between her thighs. She started cursing and trying to brush the embers off the seat cushion and Elody and Ally were still fighting and I was trying to talk over them, reminding them all of the time we’d made snow angels in May. The tires skidded a little on the wet road, and the car was full of cigarette smoke, little wisps rising like phantoms in the air.

Then all of a sudden there was a flash of white in front of the car. Lindsay yelled something—words I couldn’t make out, something like sit or shit or sight—and suddenly the car was flipping off the road and into the black mouth of the woods. I heard a horrible, screeching sound—metal on metal, glass shattering, a car folding in two—and smelled fire. I had time to wonder whether Lindsay had put her cigarette out.

Then Vicky Hallinan’s face came rising out of the past. I heard laughter echoing and rolling all around me, swelling into a scream.

The thing is, you don’t get to know. It’s not like you wake up with a bad feeling in your stomach. You don’t see shadows where there shouldn’t be any. You don’t remember to tell your parents that you love them or—in my case—remember to say good-bye to them at all.

If you’re like me, you wake up seven minutes and forty-seven seconds before your best friend is supposed to be picking you up. You’re too busy worrying about how many roses you’re going to get on Cupid Day to do anything more than throw on your clothes, brush your teeth, and pray to God you left your makeup in the bottom of your messenger bag so you can do it in the car.

“Beep, beep,” Lindsay calls out. A few weeks ago my mom yelled at her for blasting her horn at six fifty-five every morning, and this is Lindsay’s solution.

“I’m coming!” I shout back, even though she can see me pushing out the front door, trying to put on my coat and wrestle my binder into my bag at the same time.

At the last second, my eight-year-old sister, Izzy, tugs at me.

“What?” I whirl around. She has little-sister radar for when I’m busy, late, or on the phone with my boyfriend. Those are always the times she chooses to bother me.

I take them from her. They’re cashmere and she’s probably gotten peanut butter on them. She’s always scooping around in jars of the stuff.

“What did I tell you, Izzy?” I say, poking her in the middle of the forehead. “Don’t touch my stuff. ” She giggles like an idiot and I have to hustle her inside while I shut the door. If it were up to her, she would follow me around all day like a dog.

By the time I make it out of the house, Lindsay’s leaning out the window of the Tank. That’s what we call her car, an enormous silver Range Rover. (Every time we drive around in it at least one person says, “That thing’s not a car, it’s a truck,” and Lindsay claims she could go head-to-head with an eighteen-wheel
er and come out without a scratch. ) She and Ally are the only two of us with cars that actually belong to them. Ally’s car is a tiny black Jetta that we named the Minime. I get to borrow my mom’s Accord sometimes; poor Elody has to make do with her father’s ancient tan Ford Taurus, which hardly runs anymore.

The air is still and freezing cold. The sky is a perfect, pale blue. The sun has just risen, weak and watery-looking, like it has just spilled itself over the horizon and is too lazy to clean itself up. It’s supposed to storm later, but you’d never know.

I get into the passenger seat. Lindsay’s already smoking and she gestures with the end of her cigarette to the Dunkin’ Donuts coffee she got for me.

“Obviously. ” She looks me over once as she pulls out of my driveway. “Nice skirt. ”

Lindsay tips her head, acknowledging the compliment. We’re actually wearing the same skirt. There are only two days of the year when Lindsay, Ally, Elody, and I deliberately dress the same: Pajama Day during Spirit Week, because we all bought cute matching sets at Victoria’s Secret last Christmas, and Cupid Day. We spent three hours at the mall arguing about whether to go for pink or red outfits—Lindsay hates pink; Ally lives in it—and we finally settled on black miniskirts and some red fur-trimmed tank tops we found in the clearance bin at Nordstrom.

Like I said, those are the only times we deliberately look alike. But the truth is that at my high school, Thomas Jefferson, everyone kind of looks the same. There’s no official uniform—it’s a public school—but you’ll see the same outfit of Seven jeans, gray New Balance sneakers, a white T-shirt, and a colored North Face fleece jacket on nine out of ten students. Even the guys and the girls dress the same, except our jeans are tighter and we have to blow out our hair every day. It’s Connecticut: being like the people around you is the whole point.

That’s not to say that our high school doesn’t have its freaks—it does—but even the freaks are freaky in the same way. The Eco-Geeks ride their bikes to school and wear clothing made of hemp and never wash their hair, like having dreadlocks will somehow help curb the emission of greenhouse gases. The Drama Queens carry big bottles of lemon tea and wear scarves even in summer and don’t talk in class because they’re “conserving their voices. ” The Math League members always have ten times more books than anyone else and actually still use their lockers and walk around with permanently nervous expressions, like they’re just waiting for somebody to yell, “Boo!”

I don’t mind it, actually. Sometimes Lindsay and I make plans to run away after graduation and crash in a loft in New York City with this tattoo artist her stepbrother knows, but secretly I like living in Ridgeview. It’s reassuring, if you know what I mean.

I lean forward, trying to apply mascara without gouging my eye out. Lindsay’s never been the most careful driver and has a tendency to jerk the wheel around, come to sudden stops, and then gun the engine.

“Patrick better send me a rose,” Lindsay says as she shoots through one stop sign and nearly breaks my neck slamming on the brakes at the next one. Patrick is Lindsay’s on-again, off-again boyfriend. They’ve broken up a record thirteen times since the start of the school year.