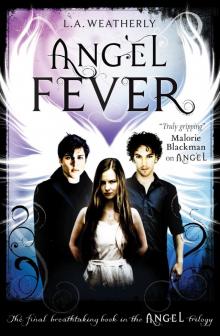 “I can’t!” Willow gasped. She was leaning over the stream, her long blonde hair a slithering mass of shampoo. She shrieked, half laughing, as Alex poured a canful of water over it. “Oh! That is so cold!”

Alex started laughing too. “You’re the one who wanted to wash it. ”

“I had to; it was getting disgusting… Is all the shampoo out?”

He grinned as he scooped more chilly water from the stream. “Nope. Not even close. ”

As Alex woke up, Willow’s laughter faded into silence.

There was no stream, no ramshackle cabin nearby. He was lying in a sleeping bag in a tent, its nylon walls a deep blue in the predawn light. Even Willow was different. The girl asleep in his arms had short red-gold hair now; it framed her face in untidy spikes.

A dream. Alex smiled as he stretched, remembering that day up at the cabin – and then everything came slamming back and his smile vanished. Christ, no wonder he’d been dreaming about the cabin: back then their biggest problem had been hiding out from the Church of Angels. Now…Alex let out a breath and rubbed his temples with one hand.

Now things were a little different.

The uncertainty was the worst part, he thought grimly. If they just knew what the hell was going on, they could start to deal with it. But it had been three days – three days – and he and the rest of his team still had no clue.

They were finally almost out of the Sierra Madre; their journey north through Mexico had been spent mostly on mountain back roads so they could keep out of sight. Three days of the truck lurching over rough terrain; three days of dust and plummeting views. Three days of sending Seb, the only native Spanish speaker, ahead to high, isolated farms to purchase gas.

“They don’t know yet that something has happened,” Seb had reported each time he returned, lugging enough gas to keep them going – along with food pressed on him by the farmers’ wives. “All they know is that the TV stations aren’t working and the internet is down. ”

Alex had felt his team’s tension increase with every rendition of this. The words didn’t begin to tell them what they were all so desperate to know. Homes up here had generators; it meant nothing that the farms still had electricity. What was going on everywhere else?

Did dead TV and internet mean that more of the world than just Mexico City was gone?

With a soft rustle, Willow stirred in his arms. As her green eyes flickered open, they at first held only sleepy confusion – and then Alex saw her remember.

She swallowed and shifted so that her arms were folded across his chest. She rested her chin on them. “Morning,” she whispered.

“Morning. ” Alex stroked her spiky hair, smoothing it from her face. “Did you sleep okay?”

“Not really. ” She pressed her cheek against his palm. “I – I still can’t stop seeing it,” she admitted in a small voice. “Every time I close my eyes. ”

“I know. Me too,” Alex said roughly. The sight of Mexico City as it had gone down – buildings shuddering into nothing; cars and people tumbling into gaping cracks – was one that would never leave him.

Willow’s eyes were haunted. “And I just keep thinking…if Mexico City was the only place affected, then we should be seeing helicopters heading down there to help. The Red Cross or the army or…” She trailed off. She didn’t need to add how silent the skies had been.

Alex gripped her hand hard. “The US could still be okay,” he told her. “If only one or two cities were hit there, they’ll be focusing relief efforts on those for now – not here. ” He’d been saying the same thing for days, trying to keep his team calm. Besides – please, god – it could actually be true.

Willow’s gaze was steady. If she’d psychically sensed his jumble of hope and dread, she didn’t comment. Looking down, she trailed a finger across his chest. Finally she cleared her throat.

“So…tell me something about you I don’t know,” she said.

Surprise touched him; it was a game they’d played back at the cabin. “You already know everything about me,” he said softly. He pulled her fully on top of him and wrapped his arms around her.

Her voice was strained. “Oh, I bet there are still one or two mysteries left, if you try… Please?” she added.

Alex knew she was trying to take his mind off what had happened – and her own, for that matter. “Okay, give me a time frame,” he said at last.

His father’s training camp in the New Mexico desert: cement buildings, burning white in the sun. Alex thought, stroking Willow’s spine. “Have I told you that I broke my arm when I was ten?”

“I crashed Juan’s motorcycle. He’d just taught me how to ride it, and I thought it’d be cool to go for a night drive through the desert. ”

Willow’s body relaxed a little. “You mean you stole his bike?”

Alex nodded, remembering. “Yeah, pretty much. There was a full moon, and I was doing donuts in the sand – and then these two headlights came at me out of nowhere, and I skidded and hit my arm on a rock. ”

“Yeah – and, man, he was pissed. Especially since he had to take me to Alamogordo to the hospital. ”

Silence fell. With an effort, Alex kept his thoughts from what might have happened to the world. Your turn, he started to say, and then they heard the echo of a truck door closing.

Willow glanced up. “Someone else must be awake. ”

Their eyes met. Once they were out of the mountains, the plan was to return to the main highways; with luck they’d be back in the US by noon. The question was, what would they find?

Willow licked her lips. “So…how long do you think it’ll take us to reach Nevada once we cross the border?”

Willow started to say something else but didn’t. She nodded tensely, and sat up and reached for their tangle of clothes.

Watching her get dressed, there was suddenly so much Alex wanted to say: that no matter what had happened, their group of Angel Killers would somehow be all right. That as long as the two of them were together, they’d get through anything. The words felt hollow, even to him.

At least Raziel’s gone, he reminded himself harshly. The angel’s fiery death above Mexico City had been the one positive in all this.

Willow pulled on her blue hoodie; her tousled head emerged. Alex touched her face, caressing her cheekbone with one thumb. “You are so beautiful, you know that?” he said in a low voice.

Abruptly, Willow looked close to tears. She clutched his hand. “It’ll be okay,” she said. “Oh god, Alex, it just has to be. ”

He had no answer. He cradled her face and kissed her deeply, and for a few seconds lost himself in the feel of their lips together.

The low, worried buzz of voices came from outside. Seb, Liz and Sam were all up. He and Willow drew apart, and Alex let out a breath.