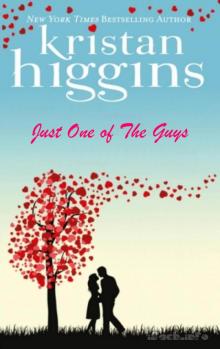 “I THINK WE SHOULD STOP SEEING each other. ”

My jaw drops. I inhale sharply, and the stuffed mushroom I just popped in my mouth is sucked right into my esophagus. Jason continues, unaware of my distress. “It’s run its course, don’t you think? I mean, it’s not like we’ve…”

Seems like my little old air passage is completely plugged. My eyes are tearing, my chest convulses—Before you break up with me, Jason, would you mind a little Heimlich? I slam my hand down on the table, rattling the china and cutlery, but Jason assumes that my distress is heartbreak and not oxygen deprivation. He looks away.

I’m being killed by my appetizer. I knew I shouldn’t have ordered it, but Emo makes the little number drenched in butter, with little bits of garlic and parsley and…um…Must breathe now. Save food review for later. The pressure in my neck is building. I make a fist, wedge it just below my sternum, and slam myself into the table. The mushroom shoots out, hits a water glass and comes to a rest on the white tablecloth. I suck in an enormous breath, then begin coughing.

Jason eyes the mushroom with distaste, and without thinking, I grab it, stuff it in a napkin and take another beautiful gulp of air. Breathing. It’s so underrated.

“I was choking, you idiot,” I manage to wheeze.

It’s hard for me to believe that I was even dating Jason to begin with, let alone the fact that he’s dumping me. Dumping me! I should be dumping him!

I glance at the wadded-up napkin containing the instrument of my near death. The poor busboy who has to deal with that. Should I warn him? Otherwise, he’ll shake it out, innocent, unaware, and the unchewed mushroom will fly across the kitchen, sliding on the floor, maybe getting squashed under a shoe….

Focus, Chastity, focus. You’re being dumped. At least find out why. “So, Jason, that’s fine. I mean, clearly it wasn’t love at first sight. But other than that, do you mind telling me…well, why?”

Jason, whom I have been seeing for about three weeks, takes an impervious sip of wine and stares over my head. “Do we have to dissect this, Chastity?”

“Well, um…think of it as my desire to gain information. I am a journalist, remember. ” I try a friendly smile, but I’m not feeling so chummy right now. Or ever, now that I think of it. At least, not toward Jason.

“Do you really want to know?”

“Yes, actually, I do. ” I pause, feeling a flush prickle its way up my chest. Our brief relationship has been tepid at best, but I thought the malaise was emanating from me. More than anything, this is a matter of wounded pride. Jason and I have been on four dates now. He lives in Albany, and it’s a bit of a hassle to make the drive, and sometimes neither of us is feeling that inspired. Still, I didn’t see this coming.

Jason’s tongue is searching for something near a back molar. His mouth contorts as his cheek bulges. I find myself hoping he’ll choke, too. Seems only fair. His eyes still don’t bother to meet mine. “Fine,” he acquiesces, leaving whatever morsel lurks at the back of his mouth for later enjoyment. “You want to hear the reason? I just don’t find you attractive enough. Sorry. ”

Jason rolls his eyes. “Sure. A handsome woman. Whatever. And with shoulders like those, you could find work down on the docks. ”

“Yes, well, proving that you could pick me up didn’t exactly set my libido on fire. ”

“We were horsing around!” I cry. It was, in fact, the one lighthearted moment in our courtship…we’d been hiking, he complained that he was tired, I took over. End of story.

“You gave me a piggyback ride for a mile and a half, Chastity. That’s something a Sherpa should do, not a girlfriend. ”

“It wasn’t my fault that you couldn’t manage a measly twelve-mile trail!”

“And another thing. You yell. ”

“I do not yell!” I yell, then catch myself. “I have four brothers,” I say primly and much more quietly. “It’s not always easy to make oneself heard. ”

“Look. Is there any point in this?” Jason asks. “I’m sorry. I just don’t find you that attractive, Chastity. ”

“Fine. For that matter, I think you need to bathe more often, Jason. This whole Seattle-grunge-patchouli thing is so 1990s. ” It’s not a bad comeback, but my face is burning nonetheless.

“Whatever. Here. ” Taking out his wallet, he puts a few bills on the table. “This should cover my half. Take care of yourself. ” He slides out of the booth.

He rolls his eyes and walks out.

I don’t care, do I? It’s not like he was The One. He was just an experiment, just a toe-dip into the dating pool of upstate New York. The good thing is, I don’t have to look at his freckled, hairless legs any more. At least I won’t have to watch him cut his food into tiny, tiny bites that he chews relentlessly until they are merely flavored saliva. Won’t have to hear that funny nose whistle he has all the time and is completely unaware of. He was only five foot ten to boot, almost two inches shorter than my superfox self.

Superfox. Right. I shove my mushrooms away—who’s hungry now?—and drain my wineglass. Not attractive. Jerk. How dare he say that? It’s not like he was George bleeping Clooney, either! Just a skinny, pale, mop-haired dweeb who happened to ask me out. He initiated contact! I didn’t throw myself at him. I didn’t kidnap him. There were no bags over heads, no handcuffs, no long rides in the trunk of my car. I did not have to dig a pit in my basement and chain him there. Why am I suddenly not attractive?

This means nothing, I tell myself. Jason meant nothing. It’s just that he was the first guy I’d dated since moving back to my hometown. And, now that I think of it, the first guy I’ve dated in…um…crap. A long time. So Jason was, well, the frog I was kissing. I want to settle down, sure. Maybe I’m feeling a little under the gun to get married and spawn the four babies I always wanted.

I’m almost thirty-one years old, and these are the ugly years for women like me. What happened to all those guys in my mid-twenties? In grad school? At the paper? There must be some line that we women cross. College, grad school, just starting out in a job…we’re a blast then. A few years of career under our belt…watch out, boys! She’s awantin’ a ring!

I glance furtively around the restaurant, hoping for a distraction. Emo’s is packed tonight—families, couples of all ages, friends. My newly dumped status seems broadcast throughout the restaurant. It’s better than being with Jason, actually, but still. I’m the only person here alone. Emo’s—a place so often visited by my family that we have a booth named after us—is half bar, half restaurant, separated by double French doors. The bar, I can see, is packed. My beloved Yankees are playing at home. They’ve won their first five games of the season. Why, I wonder, did I agree to go out with Jason when I could be watching Derek Jeter instead?

Without further thought, I leave the booth, the site of my humiliation and near-death episode, wave to the waitress to alert her to the change of venue and go into the bar.

“Hey, Chas!” Several men—Jake, Santo, Paul, George—chorus my name, and my battered ego is mollified somewhat. Having four older brothers, two of whom are Eaton Falls firefighters alongside my father, a captain, ensures that I know just about every local male under the age of fifty. Unfortunately, this has done nothing for me thus far on the boyfriend front, sin
ce there seems to be a law against dating the O’Neill girl—me.

“Nah. How about a Scorpion Bowl? Okay?”

Stu pauses. “You sure? They’re not really just for one person. ”

I find an empty stool and turn my attention to the Bronx Bombers. The mighty Jeter makes a trademark twisting leap, snags the ball, then tags out the runner who was foolish enough to assume it was safe to leave second base. Double play, thank you, Derek. At least something’s going right tonight.

Stu puts my drink in front of me, and I take a large gulp, then grimace. Stupid Jason. I wish I’d dumped him before he dumped me. I knew he wasn’t the one I’d end up with, but I was hoping to like him more as time went on. Hoping for some hidden qualities to seep out from his pallid, freckled skin and eradicate the sneaking suspicion that I was dating him because I had no one better to be with.

“Here you go, Chastity,” Stu—six feet even—says, setting down the nacho mountain in front of me. Cheese oozes off the sides, jalapeños are glommed on top of a cloud of sour cream, and suddenly, I’m starving, the mushroom mishap forgotten.

“Thanks, Stu. ” I pull off a hunk of nachos and take a bite. Heaven. Another swallow of hideous drink. Not so bad this time, not with a nacho chaser, and a pleasant buzz fuzzes my brain. Good old Scorpy. Haven’t had one since an ill-advised college drinking party, but I’m starting to remember why they were so popular back then.

The inning is over, and a commercial comes on. Taking another bite and another slug of my drink, I glance back out at the restaurant. Through the French doors at the table nearest the bar sits a good-looking man. Though I can’t quite see his companion, her hair is white, making me think she’s his mother, possibly his boss. He really is handsome in that perfect and somewhat sterile New York Times Magazine way…prep school rich, full lips, long, flopping McDreamy-style blond hair, bone structure of the gods. Six-two. Even though he’s sitting, I can estimate his height to within centimeters, barring unanticipated leg amputation, of course. Six-two. The perfect male height. Aside from Jeter, and Viggo Mortenson as Aragorn in Lord of the Rings, this guy is basically my ideal man.

Watching him, my heart sinks a little further. A man like that is way, way out of my league. Not that I’m a hideous, stooped, wart-ridden hag, but I’m…well. Perhaps I’m a bit…tall? But isn’t tall in? The fashion designers love tall women, the Scorpion Bowl tells me. I snort. Maybe women who are thirty or forty pounds lighter than I am, but still. Better five-eleven and three-quarters than four foot nine. And yes, I’m strong. Healthy. Strapping. Muscular. Teamster-esque.

I sigh. No, Mr. New York Times Fashion Section would never even notice me. It’s a pity, because I’m getting a little turned on just watching him chew. It’s sexy. Sexy chewing. Listen to me! And yet it’s true. I’ve never seen sexier chewing.

Someone slides in next to me at the crowded bar. Trevor. Great. He looks at me, does a double take, and one gets the impression that he wouldn’t have chosen this particular spot at the bar had he known the O’Neill girl was sitting here.

“Hi, Trevor, I’ve been dumped,” I announce, regretting it immediately. It was supposed to sound self-deprecating and wry, but it falls flat.

“Who dumped you?” he says. “Not that skinny pale guy?”

Just One of the Guys by Kristan Higgins / Romance & Love have rating 5.1 out of 5 / Based on51 votes