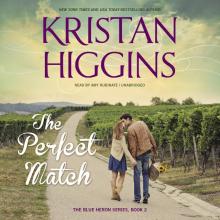 THE DAY Honor Grace Holland turned thirty-five, she did what she always did on her birthday.

She got a Pap smear.

Sure, sure, Honor was aware that gynecology was pretty low on the totem pole of celebrations. It was just easier to schedule the dreaded appointment if it was on a memorable date. Practical, that was all, and she was nothing if not practical. Faith and Prudence, her sisters, and Dana Hoffman, her closest friend, had planned to take her out, but there’d been a snowstorm last weekend, and they’d had to cancel. The family would gather this weekend for cake, so it wasn’t like the Pap smear was the only celebration she’d be having.

She assumed the position on the exam table while her doctor kindly averted his eyes, and practiced the deep breathing the irritatingly flexible yoga instructor had demonstrated with such vigor until she and Dana had giggled like two little kids in church. Didn’t work then, didn’t work now. She stared at the Jackson Pollock print on the ceiling and tried to think happy thoughts. She really needed to update the website. Design a label for the new pinot gris Blue Heron Vineyard was launching. Check the month’s orders.

It occurred to her that work should not be her happy thoughts. She tried to think of something not work-related. She had some Lindt truffles at home. That was good.

“So how are things, Honor?” Jeremy asked from between her legs.

“Working a lot. You know me. ” And he did. Jeremy Lyon was an old family friend as well as her sister’s ex-fiancé. He was also gay, which didn’t seem to make his palpation of her ovaries any less yucky.

Jeremy snapped off his gloves and smiled. “All done,” he said.

Honor sat up fast, despite the fact that Jeremy was terribly nice and had famously gentle hands. The good doctor handed her a prewarmed blanket—he was thoughtful that way. He never made eye contact during the breast exam, and the speculum was always placed on a heating pad. Small wonder half the women in Manningsport were in love with him, no matter that he liked men.

“He’s great,” Jeremy said. “Thanks for asking. Speaking of that, are you seeing anyone, Honor?”

The question made her blush, not just because Jeremy’s famous hands had been Down Under, but also because. . . well. She was private. “Why do you ask?” Did he want to fix her up? Should she say yes? Maybe she should. Brogan was never—

“Just need to ask a few questions about your, um, certain personal aspects of your life. ”

Honor smiled. Jeremy, despite being a doctor, was still the cute boy who’d dated Faith all through college, and couldn’t quite forget that Honor was a few years older. “If it’s covered by HIPPA, then the answer is—” Yes, indeed, what was the answer? “The answer is yes. Sort of. And if you tell anyone in my family, I will kill you. ”

She sat up a little straighter. “Because why, Jer?”

“Yes, I know. What does that have to do with—oh. ” Her stomach sank abruptly, as if she was in a fast-moving elevator.

“Nothing to worry about, of course,” he said, blushing again. “But the years are precious. Egg-wise. ”

“What? What are you talking about?” She pulled her hairband out and shoved it back on her head. Nervous habit. “Is there a problem?”

“No, no. It’s just that thirty-five is considered advanced maternal age. ”

She frowned, then tried to stop. The mirror had shown a permanent line between her eyebrows just this morning (damn you, natural light!). She’d have sworn it wasn’t there last week. “Really? Already?”

“Right. ” Jeremy winced. “I’m sorry. It’s just the quality of your eggs starts to decline about now. Medically speaking, the best time to have a kid is around twenty-two, twenty-four. That’s the sweet spot. ”

“Twenty-four?” That was more than a decade earlier. All of a sudden, Honor felt ancient. She had a wrinkle between her eyes, and her eggs were aging! She shifted on the examination table. Her hip creaked. God, she was ancient! “Should I be worried?”

“Oh, no! No. But it might be time to think about these things. ” Jeremy paused. “What I mean is, I’m sure it won’t be an issue. But yes, the chances of birth defects and infertility do start to increase about now. They’re still small, and infertility treatments are amazing these days. This doctor in New Hampshire just had success with a fifty-four-year-old woman—”

“I’m not planning to have a baby in my fifties, Jer!”

Jeremy took her limp hand and patted it. “I’m sure it won’t come to that. I’m required to tell you as your doctor, that’s all. Same as telling you to eat right. Your BP is just a tiny bit high, but that’s probably white-coat anxiety. ”

She wasn’t anxious. At least, she hadn’t been when she’d first come in. Fungus. So now she had high blood pressure, in addition to leathery skin and hardening ovaries.

“You look fantastic,” Jeremy went on, “so there’s probably no cause for worry—” Probably? It was never good when a doctor said probably! “—but if you’re seeing someone, it might be time to start thinking about the future. I mean, not that you need a man. There’s a really good sperm bank—”

She yanked her hand back. “Okay, Jeremy, you can stop now. ”

Another attempt at a calming breath. “So think about babies sooner rather than later, is that what you’re saying?”

“Exactly,” Jeremy said. “And I’m sure you don’t have anything to worry about. ”

“Except birth defects and infertility. ”

SHE CALLED DANA from Jeremy’s parking lot, safe within the womb of her Prius. Small wonder that everything was taking on obstetrical overtones.

“House of Hair,” Dana answered, which made Honor mentally flinch every time.

“Thank God. I just got done giving Phyllis Nebbins her monthly perm and blue rinse and I was this close to screaming. Like, do I really want to hear about her new hip? Anyway, what’s up?”

“I just got out of Jeremy’s. I’m old and need to have babies, quick. ”

“Do you?” Dana said. “I don’t know if I can stand losing another friend to motherhood. All those stories of screaming and colic and precious, precious angels. ”

Honor laughed. Dana didn’t want children—she said it was the main cause of her divorce—and often called to describe the brattiest behavior she saw at House of Hair in curdling detail.

But Honor loved kids. Even teenagers. Well, she loved her seventeen-year-old niece, Abby, and she loved her nephew, Ned, who still had the mental age of fourteen, even though he was twenty-two now.

“Other than that, what’s up?” Dana asked. “Wanna go out tonight, grab a few drinks in honor of you being an old hag?”

Honor was quiet for a minute. Her heart started thudding. “I’m thinking that, given the news, maybe I should have a talk with Brogan. ”

There was silence. “Really. ”

Another pause. “Sure, I guess I can see your rationale. Aging ovaries, shriveling uterus. ”

“For the record, there was no mention of a shriveling uterus. But what do you think?”

Honor adjusted her hairband. “You don’t sound sure. ”

“Are you sure, Honor? I mean, if you’re asking me, maybe you’re not, even if you’ve been sleeping with the guy for the past however many years. ”

“Quietly, quietly, okay?” It’s not like there were a dozen people named Honor in Manningsport, New York, population seven hundred and fifteen, and Dana and she had very different views on what could be talked about in public.

“Whatever. He’s rich, he’s gorgeous, you’re hung up on him. Besides, you have everything already. Why not Brogan, too?”

There was a familiar edge to her voice. Honor knew her friend had a very rose-colored view of Honor’s life, and yes, certain aspects of it were quite wonderful. But like everyone, Honor had her issues. Spinsterhood, for example. Aging eggs, for another.

Honor sighed, then saw her reflection in the mirror. There was that frown again. “I guess I’m just worried he’ll say no,” she admitted. “We’ve been friends for a long time. I wouldn’t want to jeopardize that. ”

The years are precious, egg-wise. She was going to have to talk to Jeremy about his delivery. Still, if there was a sign from God, it was probably those words. “Nothing ventured, nothing gained, I guess?” she suggested, hoping for some reinforcement.

Dana sighed, and Honor sensed her patience was coming to an end. Couldn’t really blame her. “Honor, if you want to pop the question, do it. Just lay it on the line and he’ll probably say, ‘Hells yeah, I’ll marry you! You’re Honor Freakin’ Holland!’ And then you can go to Harts Jeweler’s and pick out that rock you’ve been eyeing for the past year. ”

Okay. That was a nice thought. “Let’s not get ahead of ourselves,” she said. But yes. There was a ring in the window of the jewelry store on the green, and Honor had admitted—only to Dana—that if she ever did get engaged, that would be the ring she wanted. Just a simple, stunning, emerald-cut diamond set in platinum. Honor didn’t think of herself as the type who loved jewelry (she only wore her mom’s pearls) or clothes (gray or blue suits from Ann Taylor, tailored white shirt—sometimes pink, if she was feeling sentimental), but that ring did things to her.

“I gotta go,” Dana said. “Laura Boothby’s coming for a rinse. Rock his world, pop the question, see what he says. Or don’t. Just don’t be wishy-washy. Okay? Talk to you soon. ” She hung up.

Honor sat another minute. She could call one of her sisters, but. . . well, neither one knew about Brogan. They knew he and Honor were friends, of course, but they didn’t know about the romantic part. The sex part. Prudence, the oldest of the Holland clan, would be all for it, having recently become a sex kitten as some weird by-product of menopause or whatnot. But Pru didn’t have much in the way of filters and tended to announce inappropriate things at family dinners or at O’Rourke’s, the local pub.

Faith, the youngest of the three Holland sisters. . . maybe. She and Honor had always scrapped a little, though things had been better since Faith had moved back from San Francisco (the only Holland to live out of New York State in eight generations). She’d love the idea. . . she loved anything romantic, being a newlywed and kind of a mushy, emotional person in general.

And then there was Jack, their brother. But he was a guy and hated nothing more than hearing stories that confirmed the suspicion that his sisters were indeed female and, worse still, had sex lives.

So no sympathetic ear other than Dana’s. That was fine. It was time to get back to work, anyway. She started the car and headed through town.

Manningsport was the jewel of the Finger Lakes region of western New York, a famed wine-making area. The winter months were the quiet time of year here—the holidays were over, and the tourist season wouldn’t kick in until April. The grapevines had been pruned, and snow blanketed the fields. Keuka Lake glittered black in the distance, too deep to ice over completely.

The Perfect Match by Kristan Higgins / Romance & Love have rating 4.1 out of 5 / Based on41 votes