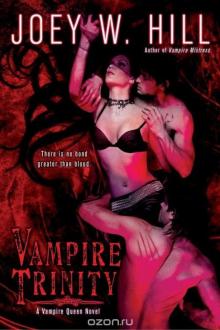 “INSATIABLE,”one of her favorite songs, was weaving its magic through I the shadows and flashing lights of Club Atlantis. Bodies moved in sinuous silhouette on the dance floor to that sensual underbeat, somewhere between slow and fast. Her attuned senses detected a variety of things. Perfumes and colognes, the musk of arousal and perspiration. Provocative laughter, the rush of a hundred different conversations and stories. Club Atlantis was a cauldron of life tonight, the sexual heat rising by the moment.

The sharp snap of a whip. A cry of pain, mixed with lust. She cocked her head. Someone was using a single tail in the public play area. Someone closer, probably along Pleasure Alley, was caning their slave, that sharp, brief slice through the air that most wouldn"t hear, lost in the dance music or other crowd noise.

But she heard it. This was a dream, and in dreams the senses detected whatever the dream demanded. However, even if she really stood in Atlantis right now, she would hear, smell and see everything as acutely. The aromas, the variations of light and shadow, even the currents of air, stirred by the movement of bodies dancing, writhing, fucking or kneeling, would swirl along her skin and leave invisible imprints like intricate tattoos.

In dream or reality, she could experience all those things now, because she was a vampire.

In this dream, however, she was still her human self. It was one of her favorite dreams, and it had been coming more frequently of late. It was five years ago, the night she met Daegan Rei. Did a moth know that the flame was going to change her life forever, or did she simply fly toward that heated embrace, knowing it would offer her something she couldn"t give herself?

In the end, the answer didn"t really matter. The moth had never wanted the choice.

Making her rounds through Club Atlantis on a busy night gave her a deep, abiding pleasure.

Feeling the energy spun by all the people here, come to satisfy their craving to Dominate or be Dominated, knowing that she"d contributed to almost every detail of the setting and atmosphere for that experience—there was nothing like it. As she moved through the club, she watched faces, emotions, body language. She"d zero in on anything that wasn"t quite right, someone who wasn"t getting the experience they desired. She worked the floor, providing guidance where needed, a warm word, a subtle suggestion, a light touch to direct attention in the right place.

A Mistress herself, she was aware of the gazes of unattached submissives following her, hoping she might choose one of them for a session, as she sometimes did. She also felt the speculative glances of Masters and Mistresses who"d like the chance to share a sub together, learn from each other"s techniques.

The desire to maximize a customer"s experience wasn"t about money, though Club Atlantis"s success spoke for itself. She understood what each unique soul sought here, and whether she could provide it. It was a skill she loved having. Her heart beat inside Atlantis, because it was who she was, what she wanted.

At times, in her bed at the end of an evening, she"d feel that heartbeat slow, and a yearning would settle into her, to find what others found within her walls. She knew her needs were more complex than most Mistresses. She wanted someone to belong to her, to be her slave exclusively, his heart, soul and mind willingly surrendered. However, there was an additional, vital component to her need as well, one that seemed beyond her power to describe. When it at last stood before her, in whatever manifestation met her deepest desires, she knew she would understand it.

That night, her intuition and her yearning clasped hands and gave her that miracle. A gift and curse at once, as Fate often was.

She drifted along the eastern wing of the club, with its wide platform view of the bar, the dance area and one of the public play areas that was crafted like a metal undersea world. Cages were designed as a coral reef, submissives bound there with restraints like seaweed. The St.

Andrew"s crosses were weathered driftwood and embedded in the side of a partial shipwreck.

More slaves were bound upon them. Gold pieces of treasure were scattered over the sandy ground and caught the flickering torchlight. Over the darker area of the shipwreck, a shadow lamp made it look as if schools of colorful fish, sharks and manta rays were passing over the mostly naked bodies restrained there.

Since she of course didn"t have the gills of a mermaid, she had a close-fitting, discreet oxygen mouthpiece beneath the jeweled mask she wore, the tank disguised behind the water ferns. In addition to that precaution, a Dom in a dark wet suit watched over her. He"d “caught” her and bound her in the harness, an intricate underwater rope performance, and now added to the torment the patrons were administering by touching her as he pleased, occasionally bringing her up to his mouth and giving her air in place of the mask.

It was a complex scene, but both were well trained. They also were husband and wife. The team of John and Tori had become a favorite attraction.

She moved onward, past the dance floor, and then to the mezzanine, where she could get a different view of the floor and the bar. While many BDSM clubs didn"t permit alcohol, she knew it helped relax and stimulate. Plus, she had a large clientele who came to dance and be entertained merely as voyeurs. Those going to the underground level for rougher play knew that they would be required to take a Breathalyzer test. They had to prove they were sober enough for safe play in private. Knowing that, the patrons regulated themselves. And in the public areas, she had more well-trained staff that blended and kept things in line.

Her snug skirt hugged her hips, her stilettos placed precisely as she moved along the mezzanine. She was aware of the way her body moved, from the quiver of her breasts to the swing of her hips, the brush of her thighs as she tightened those muscles to walk sure and upright on the heels. James, her head of security, followed. They usually did these rounds together, because she gave him insight on who might need extra attention from his people.

Being very good at what he did, he usually identified those trouble spots at the same time. But exactly because he was good, he wanted the additional set of eyes, the viewpoint of what he might miss.

So far, tonight"s crowd was a good one. Of course, Atlantis didn"t allow just anyone in their doors. Even a guest pass required thirty minutes with a staff person, discussing the rules of Atlantis. Anyone who gave off warning signals, or appeared to be paying lip service to those rules, didn"t make it past the lobby. The vetting for the underground level was even more stringent.

She paused at the rail, scanning. Even as she assessed, she enjoyed as well. Watching the give-and-take between power and surrender. Whispering hands, bodies straining and needy. A slave"s eyes glazed in lust, the Master"s expression deep in the zone, registering every nuance of a submissive"s reaction. Once stepping over the threshold of Atlantis, the shell was left behind. This was the sanctuary for the Freudian id, the primitive impulses and needs of the soul.

Impressions like those came at her in varying waves of heat, and she rode those currents like a shadow dolphin in the undersea exhibit, her attention wandering over the floor.

Then she felt something extraordinarily different. Turning her head with unerring instinct toward the source, she saw a man leaning against the bar.

&nbs
p; Though he was all the way across the main floor, he locked gazes with her. In that brief second, he caught her breath, took it away from her with all the power of a black-and-white movie, though she couldn"t explain why or how it happened. She"d been a Dominant all her life, recognizing it quickly after reaching sexual maturity. It was something she didn"t doubt in herself, in her blood. Yet this male was no submissive.

In fact, he was pure, 100 percent Dominant in all aspects of his life. He would possess the woman he chose, body, heart and soul. Such a woman would have to be as strong as he was to hold her own and demand his soul in return. He would be satisfied with nothing less. He was looking for an equal, a Mistress. A unique, complex Mistress who would surrender to him and him alone, time and again, because it would simply be that way between them.

While all sizes and shapes of people came in here, she"d seen her share of devastatingly handsome men, both Masters and subs. With his dark eyes, close-cropped hair and powerfully built body, this one certainly had no trouble catching female attention. But she was barely aware of anything about him except his eyes in that vital first-impression moment. A moment that lengthened into a cycle of accelerating heartbeats as he straightened, left his drink and came toward her.

She was aware of every inch of her skin under his gaze. That heartbeat that slowed in the quiet hours, when Atlantis"s lights shut off, was pounding as rapidly as the rock beat on the dance floor.

He was inevitable, the most devastatingly sexy word she"d ever applied to a man. When he stopped before her, the first words he spoke made it clear he understood it as much as she did.

It wasn"t a pickup line. The three words were command, intention and destiny, all at once.

That yearning she felt in the small hours of the morning, the answer was this man. When the third point of the triangle came, the one who would be her slave, who would surrender and utterly belong to her, she was certain that yearning would become something even sweeter, sharper, even more impossible to describe. Fulfillment, a three-point star so powerful its light would explode inside her, bringing unimaginable emotional and physical pleasure.

Of course, on the reality of that night, she hadn"t had that clarity, but in the drifting fantasy of her dream, she knew it as truth, her desires meeting her memories.

She"d taken him to the Rose Room. It was remarkable that she"d chosen that room that night. Wall-to-floor-to-ceiling mirrors, the only prop a pedestal in the center with a vase of bloodred roses, a trail of petals scattered across the reflective floor.