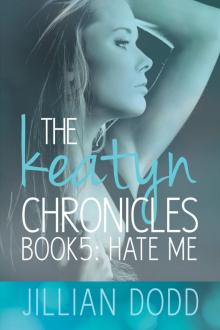 When we last saw Keatyn, she had just told Aiden that she wouldn’t be going back to Eastbrooke with him.

Below are the last few lines of Adore Me.

Oh gosh. This is it. This is where I finally have to do it.

I’ve been dreading this moment since we stepped off the plane.

“Yes, you do have to leave for the airport soon. ”

“What do you mean, you? And why do you look sad again?”

“Then why did you let me come with you? Give me hope? Why didn’t you kick me off the plane?”

“Because I didn’t handle it well when we were at school. Things felt unsettled, and I wanted to give you closure. Give us closure. I didn’t do it to hurt you, Aiden. I just wanted to be able to say goodbye. ”

Aiden stands up quickly and paces in the sand in front of me. “Where are you going?”

Aiden pulls me off the sand and into his arms. The wind blows my hair across my face in front of me. Aiden pushes it behind my ear, gets close to me, and says softly, “Then I’m moving to France too. ”

“What? No. What about your sister?”

He looks over my shoulder, so I glance behind me to see Peyton happily laughing and swinging her feet off the edge of the pool, Damian sitting next to her.

“I think it's time I start living my life for me,” he says.

He kisses me, effectively stopping me from speaking.

When the kiss ends, he gently pulls away and looks at me seriously. His eyes tell me everything I already know. “Keatyn, I mean it. Wherever you go, I go. I don't have a choice. ”

He pulls my hand up and places it on his chest.

“You have my heart and I kinda need it to survive. ”

“Do you trust me?” he says, still holding my hand against his chest.

“Good. Because when I said we’re going to be together forever, I meant it. ”

Tears run down my face because this is exactly what I dreamed a boy would say to me.

But my life isn’t a dream.

He sweeps my hair behind my neck and kisses it.

He must think he needs to infuse me with more love potion.

But I never really needed it.

He's had a piece of my heart since the moment I laid eyes on him.

“And I was thinking just the opposite, Boots. Forever isn’t going to be nearly long enough for us. ”

“You can’t come with me. Not right now. You need to go back to school. ”

“It’s my mom. I told you before. There are some family things going on. ”

“You did, but you were very vague. You know you can tell me anything, Boots. Seriously. Anything. ”

“Then I’ll move to France and see you when you aren’t busy. ”

“Aiden. Please,” I plead. “Go back to school. ” I need him to leave before I start bawling.

“Kinda. She’s stressed and it's making her sick. I need to help. ”

“Both, maybe. I don’t really know because I’m not there. And she’s sort of shut me out and—”

“I thought your trip home was good?”

“It was, but my mom was, um, sorta distant. Not like herself. And she's lost weight. I'm really worried about her, Aiden. ”

“What does your stepdad say?”

“He's trying to talk her into taking some time off. ”

“Do you think she will?”

“Then maybe things will get better on their own. ”

That’s what we hoped would happen, I want to say. But things have not gotten better on their own. They seem to have gotten worse.

Aiden continues, “I would think your mom would be upset if you left before the semester is over. You won’t get any credit for all your work this year. Besides, it’s only a few weeks until Christmas break. Come back with me and we’ll finish out the semester together. Then we can go anywhere you want. ”

I back away from Aiden, trying to put distance between us, both physically and emotionally.

He notices and immediately pulls me back into a hug.

I try to stay stiff, but I can’t. I melt into his arms. I wish I didn’t have to lie to him. Or hurt him.

He looks deep into my eyes and runs a gentle hand across my shoulder. “Don’t. ”

“Pull away from me. You’re emotionally retreating. It hurts. ”

“I don’t want to hurt you, Aiden. I’m just trying to do what’s right. ” I throw my hands out in frustration. “For everyone. ”

He slides his hands into mine, holding them tightly. “Keatyn, I know you’d never hurt me on purpose,” he says softly.

Tears flood my eyes and I shake my head.

“Is it the forever stuff?” he asks. “Am I freaking you out?”

His forever stuff could be my out.

All I have to do is say yes.

That we’re too young.

“I can’t promise you forever, Aiden. ”

“I’ve never asked you to promise me forever, Boots,” he says, the hint of a smirk playing on his lips. “Just promise me tomorrow. ”

I tilt my head and study him. “Is that your sneaky way of getting me to promise you forever? Because there is always another tomorrow. ”

He laughs in the deep, sexy way I adore. “I didn’t think of it that way, but I guess maybe I am. ”

I notice movement out of the corner of my eye; it’s the security guys coming out of the turret with my suitcases.

They're going to try to force me to go back.

I mentally scroll through my options. I can run . . .

“Miss Keatyn,” Sven’s voice comes over the intercom system. “You have a phone call in the main house. ”

I see Inga walk out onto the deck, waving one of the handsets.

As I walk to get the phone, Damian leaves Peyton's side and intercepts me. “What's the verdict?”

“Aiden says if I don't go back then he's not either. But that’s the least of my worries now. Garret's goons packed my luggage. I think they're going to try to force me. ”

“Whatever you need, you know that,” he says, squeezing my shoulder reassuringly.

Inga clears her throat, so I let go of Damian, go up the stairs, and then take the phone into the house.


I’m mentally gearing up for a battle with Garrett when I answer. “This is Keatyn. ”

"I just got off the phone with Garrett. ”

“Keatyn,” Tommy says softly, “please don't make me worry about you, too. ”

The desperation in his voice is clear.

“I can't. I’m flying Cooper here tomorrow so we can work on my plan to break Vincent. I have to, Tommy, or this won’t end well. For me or Mom. ”

The plan that has been simmering since I left school and, this morning, as I watched a yacht drift off into the distance, finally became concrete.

“I have to get my friends to the airport. Would it be okay if I call you after they leave?”

No, but I can run. Right now, when they're least expecting it.

What Tommy doesn’t know is that before I came here, I moved money to various bank accounts in the Caribbean. Of course, it was in case I had to run from Vincent, not my own security team.

“I think Garrett and Mom have been keeping information from you,” I tell him. I’ve been suspecting this for a while, but have yet to mention it.

“I think Vincent is still sending stuff to Mom and threatening her. Or, worse, threatening you and the girls. And lying to you is killing her. I think that’s why she’s getting so thin. Why she was so freaked out when I showed up for Gracie’s birthday. ”

Tommy doesn’t answer for a few seconds. “Fucking Garrett,” he finally says. “I knew she was keeping something from me. Not only is she hurting herself, she’s killing our relationship. ”

“I’m trying not to. You know how much I love your Mom and our family. ”

“I know. ” Tommy has given me so much love and support and never ever asked for anything in return. Ever.

“How about you focus on getting Mom and the girls to France. Once she feels safe, things will get better. I know they will. Let me deal with Garrett. ”

“Does that mean you’ll go back to school?”

“Good. Once I get to New York, we’ll discuss your other plans. Deal?”

I hang up the phone and close my eyes.

How am I going to do what I need to do from Eastbrooke?

And what’s Damian going to say when I tell him he can’t see Peyton again?

I set the phone back in its base, step out on the balcony, and lie. “Hey, Damian, can you come up here for a minute? Your dad’s on the phone. ”

Damian kisses Peyton and comes up the stairs. Aiden is still waiting for me on the beach, so I give him a little wave.

I look down at the clover tattoo I got on a whim. Aiden probably thinks I got it because of him. And, in a way, I did. It's said that warriors used to design their own shields before they went into battle. They included symbols that were important to them, like a family crest or a cross. This tattoo is part of my shield. My hope is that if I can somehow combine chaos with luck, then I might actually survive my battle with Vincent.

But I just screwed everything up.

Damian squints at me. “My dad’s not really on the phone, is he?”

At first he looks relieved, but then he glances down at Peyton and mutters, “Shit. ”

“I know. You’re going to have to keep your relationship a secret. Can you do that?”

He rolls his head, considering options. “She knows I have to go back to California. ”

“Is there any way you could suggest that she not tell anyone about you? I know her. She’s going to want to tell the world. ”

“Yeah, I’ll make up something. What’s going on? Who was on the phone?”

“Tommy. Garrett called him. Told him that I moved money to some Caribbean bank accounts. ”

He takes two steps toward me and pulls me into a hug. “I’m in love with Peyton. But, right now, your safety is priority number one. ”

“Yeah, I guess you’re right. This is all just so surreal. ”

“Tell me about it. Okay, so I have to go tell Aiden that I changed my mind. He’s going to think I’m nuts. ”

Damian smiles and waves a hand at me. “Girls change their minds all the time. He won’t think anything of it. ”

I start to walk toward the door, but change my mind, heading for the bar instead. I take a shot glass off the shelf, fill it with Patron Silver, and slam it down.

As the liquid warms my insides, I take a deep breath and try to figure out how to spin this.

Then I make my way down the beach.

Aiden’s sitting on a chaise, staring out at the ocean. “Is everything okay?” he asks as I sit down next to him.

“Yeah, everything’s fine. My stepdad just wanted to talk to me. ”