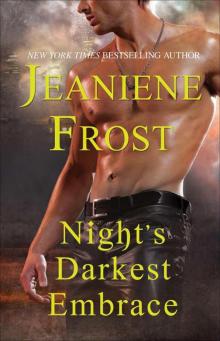 Thank you for purchasing this Pocket Star Books eBook.

Don’t miss the exclusive excerpt from

An exclusive excerpt from

The sun’s rays slipped further behind the Bed Bath & Beyond sign across the parking lot. Soon it would be dark. All I had to do was not be stupid until dark, less than ten minutes from now.

I wasn’t going to make it.

Shoppers drove in and out of the complex. If they noticed me, they chose to mind their own business instead of asking why I was pacing like a crazy person in the back of the parking lot by a Dumpster. If my father were here, he’d urge me to follow their example and mind my own business, too. But the raspberry shimmer in front of the Dumpster called to me. Even the wafting stench of garbage wasn’t enough to slow my pulse as I stared at it. This had to be the smelliest gateway this side of the Mississippi, but I was looking at the only known entrance into Nocturna.

For a few more minutes, anyway. The gateway was only active between dusk and dark.

The shimmer in front of the Dumpster started to fade even as the lights in the parking lot turned on, signaling the arrival of evening. If I let the gateway disappear, I’d do the same thing I’d done every night for the past month—go back to my apartment and try not to think about what lay on the other side of that fading raspberry veil.

Don’t go back there, Mara. Please.

My father’s plea replayed in my mind, but it wouldn’t sway me this time. There were worse things than danger. Like guilt, or doing nothing and risking more people you loved being picked off.

I backed up several feet before flinging myself toward the Dumpster. Only the faintest haze remained in front of it now. My sneakers thudded on the pavement as I picked up speed, running right at the center of the smelly container, streamlining my body into a dive . . .

I barreled not into the metal Dumpster but into Nocturna, making it through the gateway before the veil closed into itself. I rolled when I hit the earth, the putrid stench of garbage instantly replaced with a heady, wood-smoke-scented air. Darkness also replaced the previous glow from the parking lot lights. It was always night in Nocturna. A few blinks later and my eyes adjusted, revealing a man on horseback galloping toward me.

“Back again, eh, Mara?” a familiar voice called out when the rider drew near enough for me to see the silver streak in his otherwise dark hair.

I brushed myself off as I stood. My backpack shifted with my movements but I shoved it into place, adjusting the straps until they were straight. Landing on my ass inside another dimension tended to jostle things.

“You’re the best patrolman here, Jack, you know that?” I replied, not bothering to answer his question. Obviously I was back or we wouldn’t be talking. “Most of the others don’t find out if anyone’s crossed over unless the person yells for them to give ’em a ride.”

“People can pop up anywhere along the barrier, and that runs for miles,” Jack said, still with an undercurrent of amusement. “And you said you weren’t coming back the last time I saw you.”

I didn’t look at him but continued to brush my jeans, as though getting every last bit of dirt from them was extremely important. “Can’t a girl change her mind without getting hassled? I missed this place—”

“Horseshit,” Jack interrupted, even as his mount snorted in what sounded like agreement. “You still think you can find the Pureblood who took Gloria, but you need to let go of that fantasy and get on with your life.”

I stiffened, my head snapping up to meet Jack’s blue gaze. “I am getting on with my life,” I said, biting off every word.

Jack shook his head in a way that reminded me of my father. The two men even looked a little alike, with their lightly lined faces and wiry frames. Plus, Jack had never made a single pass at me, which was why I trusted him enough to stay at his place when I came here.

“Suit yourself,” he grunted. “I’m not your babysitter. You’re too old for one now, anyway. Go on. You can use my cabin to freshen up.”

I thought I heard Jack add, “Like usual,” but I chose to ignore that. Now that I was here, a feeling of peace washed over me. Maybe it was because traveling through dimensions was my birthright as a partial demon. Or because I’d determined to let nothing stop me on this trip. That wouldn’t be easy—or safe—but I was old enough now that most of the Purebloods weren’t interested in me. Twenty-two was almost middle-aged to them. They only liked children or, at most, older teenagers.

Like Gloria had been. And my half sister now was.

That, more than the guilt over Gloria that was so familiar as to feel normal, was why I’d had to break my promise and come back. An overheard conversation between my little sister and her friend about Nocturna had been enough to convince me that I couldn’t stay away. I was the only living eyewitness. If I never came back to search for the Pureblood who’d taken Gloria, maybe next time it would be my sister who was doomed to die a horrible death. Damned if I’d let that happen, no matter my father’s fears.

By the time I followed the line of mounted lanterns that took me to Jack’s cabin, I was convinced that I’d made the right decision. I went inside the small lodge, noting that Jack had added a few more crossbows to his weapons cache, but aside from that, nothing else had changed. The mirror Jack used for shaving looked like it hadn’t been cleaned since the last time I’d wiped it, and his floor probably hadn’t been swept since then, either. If I didn’t stay here occasionally, the dirt would be up to Jack’s waist.

I pumped some water from the spigot and cleared away the dust from the mirror, frowning a little once I saw my reflection. Dirt smudged my cheek and I had bits of leaves in my hair. That wouldn’t do.

A few more pumps of the spigot and I washed off the remaining traces of dirt from my face, using my fingers to comb bits from the forest floor out of my hair. At least I thought I got it all out; the dried leaves matched the deep brown color of my hair, so a few stragglers might have remained. Then I shrugged out of my backpack and took off my jeans, T-shirt, and sneakers to put on the long denim skirt, boots, and blouse that I’d folded up inside. The other clothes were more comfortable, but a little glimpse of cleavage or a flash of leg went a long way toward getting reluctant residents of Nocturna to spill information. Once I was finished, I put on my gun belt and then my leather jacket, giving my reflection another critical glance.

Lipstick would help, but I’d forgotten to slip some into my backpack. Lucky for me, my mouth was naturally full and reddish, so that, along with a clean face and somewhat tamed hair, would just have to do.