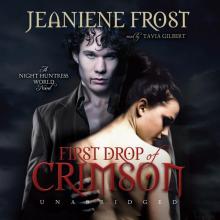 New Year's Eve, one year before

Even though they were in the basement, Denise could still hear the sounds of battle outside. She didn't know what had attacked them, but they couldn't be human, not for Cat to look so scared when she'd ordered them downstairs. If she was frightened, then they should all be afraid.

Crashing noises above made Denise gasp. Randy's arm tightened around her. "It'll be okay. "

His face said he believed otherwise. So did Denise. But she smiled, trying to convince her husband she believed the lie, if only to make him feel better.

His arm eased off her. "I'm going upstairs to help look for it. "

It was the object that had drawn these creatures, whatever they were, to this house in the middle of icy nowhere. If it could be found and destroyed, the attack would stop.

Five years ago, Denise wouldn't have believed in vampires, ghouls, or objects possessing supernatural powers. Now because she'd chosen to spend the New Year with her half-vampire best friend in a house filled with things the average person didn't believe in, she and Randy would probably die.

"You can't go up there, it's too dangerous," Denise protested.

Denise knew finding it was the only chance any of them had. "I'll go with you. "

"Stay here. The kids are scared. "

Denise looked to the faces huddled in the far corner of the basement room, eyes wide with fear. Former runaways or homeless kids who lived with the vampires, their rent paid in blood donations. The only other adult in the room was Justina, and even her normally imperious expression was tremulous.

"I'll stay," Denise said at last. "Be careful. Come right back if those things get any closer. "

Randy gave her a quick kiss. "I will. Promise. "

"I love you," she called out as he flung open the door.

He went out the door and Denise locked it behind him. It was the last time she saw Randy alive.