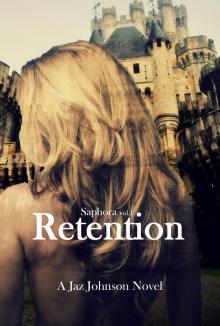 This book is fiction. Names, characters, places, incidents, and events are entirely fictitious. Any resemblance to any actual events, works, persons, dead or living, is coincidental, and is beyond the intent of the author.

No part of this text may be reproduced, transmitted, downloaded, decompiled, reverse engineered, stored in, or introduced into any information storage and retrieval system in any form, whether it be electronic or mechanical, photocopying, recording, or otherwise without written consent of the author.

I’d like to thank my family for being there for me and giving me the support that I needed. Thank you for believing in me and pushing me to do what I love. I want to thank all of my friends for their support as well. For giving me feedback on my stories telling me their honest truth. Thank you to all of my teachers and professors for walking me through the wonderful world of fiction. And of course, I’d like to thank all of my fans and followers! You keep me engaged and humble.

It was a Saturday evening, atop a winding hill in an old abandoned house. It was pouring and hardly anything was visible in the onslaught of water, which made for the perfect cover up to the crash-landing. Something – someone had landed in this unsuspecting home. Everything was damp. The roof of the kitchen had caved in, the windows were shattered, the tiles were cracked and covered in debris, the cabinets had been crushed, the pipes were bent and leaking water, and all that was left standing was an island marble counter. On top of it, lay the child that came crashing through. Her body lay limp, and her mind was settled in an unconscious state. She was an odd being, what with her pastel mint coloured hair, and her ruby coloured eyes, hidden behind closed eyelids. Her long hair curled slightly around her neck and chin as she breathed long, smooth breaths. But that peaceful slumber would soon be rudely interrupted by a man who had been ordered to bring her back with him – dead or alive.

Tebias was a man of power. A man of defiance. A man of severity. A man to be reckoned with. He wore an attire of stealth, allowing him to move through the night without a trace, and to be feared by anyone who dared lay unwelcome eyes on him. With each step he took towards the entrance of the kitchen, his thick combat-fitted boot crunched down on scattered debris from the dismembered roof. And with each crunch, it shook the child’s sleeping mind further towards consciousness. It wasn’t long before she began to stir, her body making faint, but noticeable movements as a whimpering groan left her parted lips. With eyebrows pulled together, her eyes slowly fluttered open, the pupils dilating and taking in their new and unknown surroundings. Her dim ruby eyes squinted, as they glanced about while her limbs began to trudge about the counter top, making movements to sit up on the cold, damp marble. Tebias stepped into the doorway of the kitchen as she lifted herself up with weak arms to lay eyes on the man unknown to her. A knowing grin tugged at the corners of his thin lips as he looked over the vulnerable child who looked onto him with wonder and confusion. He took a step towards her, shaking his head in amusement as he took a look around the decrepit room.

“My word, Saphora. Look at the mess you’ve made…” he mumbled to himself, kicking a wooden plank out of his way. The child flinched and looked down at it as it was moved, before looking back up at him, wondering who he was. He was in fact her hunter – hand chosen. Saphora stayed silent as he continued to grow closer to her, moving with careful and planned actions. He raised an eyebrow, carefully examining her expression.

“… Why do you not run, I wonder,” he said to her, tilting his head, his slicked back red hair shifting in his ponytail. Saphora moved her head back as he drew closer.

“Run?” she repeated, obviously not comprehending. With raised eyebrows, Tebias was taken aback by her response, before the grin that had been tugging on his lips finally broke through.

“Could it be…Do you know who I am?” he asked her as he would a child. She timidly shook her head no. He let out a chuckle and shook his head, giving a glance to the ceiling, before returning to meet her confused eyes.

“What fun. And tell me. Do you know who you are, child?” he asked her, leaning forward with an extended hand. Her chin lowered at the question, her eyes darting to the side for a brief moment before answering.

“…I am, Saphora?” she asked, more than answered, having heard Tebias address her as such. He nodded and smiled, looking down at the cracked tile.

“Indeed you are. And do you know…what you are?” he would question her again. This time her brows pulled together as her lips parted to answer. But nothing came out. She did not know.

“That’s quite alright. You don’t need to know. Just come with me,” he said, almost demanding it. But Saphora was hesitant, as she should have been. She gently shook her head and began to move back. But the moment that caught the eye of Tebias, his hand slammed down on the counter, making her flinch and yelp, her eyes going wide.

“Now,” he breathed, his grin fading into a hard line. After swallowing the lump that had formed in her throat, she sheepishly began to slide forward, but was immediately stopped by an urgent voice ringing in her head.

“No, Saphora!” it yelled in a whisper, stopping her completely. The woman’s voice rang in her ears as her eyes darted about, while Tebias’ hand gripped the edge of the counter in frustration. His temper was not one to be toyed with.

“Is there a problem?” Tebias asked with a snarl, making Saphora refocus. She wasn’t sure of what to say. She was still trying to figure out what, and who she had just heard, and if she had in fact actually heard it.

“Move,” Tebias demanded. And once again, Saphora began to move forward. But again, she was stopped by this ringing voice of a woman, strangely familiar to her.

“You mustn’t go with him, Saphora. Listen,” she echoed into her ears. And then with a grunt, Tebias reached forward, his patience having been worn.

“Alright then,” he said, going to grab her by the wrist. She gasped as she was yanked forward by it, her face scrunching up in pain and discomfort. She pulled her wrist back, only to have it yanked on again, this time dragging her across the counter-top.

“No!” she shouted in protest, shaking her head and pulling in resistance again, to no avail. Tebias pulled again, a frown forming on his face as he pulled Saphora onto the floor, and proceeded with dragging her out of the kitchen. Saphora’s bare heels dug into the floor as she desperately tried to use her own weight as an anchor against his force. She clawed at his gloved hand that was tightly secured around her wrist as she was continued to be pulled. And then the voice rang again.

“Listen to me my child. Quickly! Repeat after me…” she whispered in her ear. Saphora flinched and muffled her whimpers, long enough to listen to the woman’s words. Noticing the sudden lack of resistance, Tebias turned around to look at the girl, who had her head somewhat down, seemingly in deep thought. He tugged on her wrist cautiously, making her trip forward, expecting a reaction. But the one he got was something he was unprepared for. Saphora’s head snapped up, revealing her now wide, glowing white eyes. Tebias almost immediately jerked back and released her hand, so that he could raise his own in defense. But it was too late. An immense amount of energy launched from Saphora’s body into him, sending her hair whipping behind her, and sending him flying through three dry walls before finally landing unconscious against the forth in one of the bedrooms. Saphora stumbled back onto the floor after the ambush, her lashes fluttering as tears welled in her stunned eyes. She took in gasping breaths as she took in the sight be
fore her, the dust and rubble slowly clearing from in front of her. She coughed a couple of times before wobbling to her feet, and leaning back on the marble counter, which seemed to become somewhat of a sanctuary to her. Her blurring eyes looked around as the woman continued to talk to her.

“Now run, Saphora. Get out of there!” she yelled. And within the instant, she took off, not exactly knowing where. She stumbled a couple of times, holding onto the wall or whatever was around for support until she found the front door. It had been kicked in, so all she had to do was run out onto the driveway. She breathed heavily as she looked around the abandoned lot. It had only just stopped raining, so the air was moist and thick, making her drags of breath longer and more strained. She took a quick look behind her to be sure Tebias wasn’t after her before she ran out into the driveway, and then down the hill to where ever the winding road would take her.