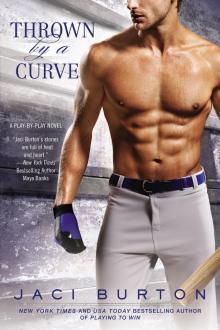 GARRETT SCOTT SAT IN THE ST. LOUIS RIVERS THERAPY room facing an entire team of sports medicine specialists, all wearing looks of doom on their faces.

From the team doctor to the therapists who’d been working on his shoulder for the past six months, their faces said it all—he wasn’t ready to pitch yet.

He was tired of it. Tired of being molded and manipulated and poked and prodded like some kind of experiment. His shoulder wasn’t getting any better, and he still couldn’t throw a pitch. He was done. His career was over, and no amount of fake hopeful expressions would make him believe any differently.

“No. It’s not going to help. I don’t have my full range of motion, and no pulleys, no weighted balls, no water therapy, and no amount of stretching is going to get it back. ”

“You don’t know that, Garrett,” Max said. As head of the sports medicine team, when Max had a plan, everyone listened. “We haven’t finished your therapy, and the season hasn’t started yet. There’s plenty of time. ”

Phil, the team doctor, nodded. “Max is right. You haven’t given it enough time. ”

Garrett glared at them both. “I said no. This has been going nowhere, and we all know it. ”

Everyone started talking at once, but it was all white noise to him. They were blowing smoke up his ass about how he was going to pitch come April.

He’d heard it before, all the pats on the back and the encouragement that didn’t mean anything if you couldn’t get a ball across the plate. They were just words. Empty promises.

The only one who didn’t say anything was the woman hovering in the background. Dark hair pulled back into a ponytail, she wore the same team-color polo shirt and khaki pants as the men, and held a digital notebook. And she was giving him a look. A pissed-off one.

“You haven’t said anything,” he said, focusing his gaze on her. “What do you think?”

She blinked and held her notebook close to her chest. “Me?”

“I’m not in charge of your recovery. There are people here with much more experience than me. ”

“You’ve watched my therapy, haven’t you?”

“Then what do you think?”

They all turned to her, watching and waiting. She finally shrugged. “I think your team is right. You’ll pitch. ”

She moved forward, and he got a good look at her. Despite the ugly uniforms they all wore, she was pretty, one of the two women on the sports therapy team. He’d thought them interchangeable and hadn’t paid much attention, because they were both brunettes, just blurs passing by while he was doing therapy with Max and some of the other senior members of the team. Now that she was closer, he really noticed this one. She had stunning blue eyes and a pretty mouth; he was definitely paying attention now that she’d spoken.

“Because you’re babying it, because you won’t give it your all. Your therapists know what they’re doing, but you fight them. ”

As soon as she said it, her eyes widened. Max crossed his arms, and Garrett could tell he was pissed.

“Yeah, you did. You’ve sat back quietly for all these months, and you obviously have something on your mind. Spill it. ”

She looked up at Max, who shook his head.

She sat next to him on the bench and laid her notebook down, her gaze lifting to his.

“Fine. You’re argumentative, confrontational, and a general pain in the ass to deal with. Honestly, no one wants to work with you because you fight your recovery. Half of healing is mental, and your head is the biggest obstacle to getting you back on the mound. ”

Huh. He glanced up at the others, who did their best to look away. “I see. ”

But when he turned back to—he had no idea what her name was. “What’s your name?”

“Okay, Alicia. You think you can make me a pitcher again?”

She gave him a confident smirk. “I know I can, if you pull your head out of your ass and work with me. ”

He liked her confidence. He liked her. She sure as hell was better looking than the rest of the sports medicine group he’d worked with all these months. And she smelled good.

“Alicia,” Max warned. “Why don’t you head up to the office, and I’ll finish up here with Garrett?”

Alicia nodded, then stood and left the room.

Garrett laughed, the first time he’d laughed in a long damn time. “It’s okay, Max. I like her. She’s honest. ”

As soon as the door closed, he turned to Max.

“I want her in charge of my therapy. ”

“Absolutely not,” Phil said, interjecting himself into the conversation. “As your doctor, I’m advising against it. Max is the head of sports medicine for the team. He’s the best. Alicia doesn’t have the experience he has. ”

“I don’t give a shit if she’s the water girl. She’s confident. She’s a sports medicine specialist, certified to do therapy like the rest of you, isn’t she?”

“You have a multimillion-dollar arm, Garrett,” Max said. “I’m not entrusting it to her. ”

Garrett stood and stretched, then looked at Manny Magee, the St. Louis Rivers coach, who’d been sitting in the corner of the room, silently taking it all in. “These guys have all been working on me for months, and I haven’t seen the results needed to throw a single goddamn pitch. I want Alicia to give it a try. ”

Manny stood and ambled over. He was tough and always honest, so Garrett knew Manny would give it to him straight. “That’s because she’s right. Physically, you’re healing fine from the injury. A lot of your problem is you’re resisting the treatment. ”

Maybe Manny was right, but Garrett doubted it. What he needed was a new therapist. If Alicia and her smart mouth could get the job done, then maybe his career wasn’t over.

He looked at Manny—at all of them.

“I need a change. What we’re doing isn’t working. And maybe someone new can help with that. ”

“I don’t give a damn if a circus clown does your therapy, as long as you’re on the mound opening day,” Manny said. “Just be ready for the season. We need your arm. ”

SHIT. SHIT. SHIT. ALICIA MASSAGED THE GIANT HEADACHE that had taken refuge between her eyes and counted down the minutes until her boss entered the office and fired her.

She’d always had a smart mouth, always spoke first and thought later. But to insult the entire St. Louis Rivers sports medicine team in one sentence had been a serious, colossal fuckup. She’d had some major success as a therapist and had been getting great feedback from her boss in the time she’d been here. This was the job of her dreams, and to make matters worse, her cousin played for this team. Gavin was going to kill her.

The frustrating part was, she knew she was right. Garrett Scott was a seriously amazing pitcher. His injury had been bad, but there was no reason to think he wouldn’t come back and be a great pitcher again, providing he cooperated with his rehabilitation. The problem was, he was the worst patient she’d ever seen in terms of cooperation. He resisted therapy, he argued with the treatment plan, and she knew damn well he wasn’t doing his at-home exercises. He
was one of those athletes who thought of himself as some kind of superhero. Get injured, do rehab, and be fine in a few weeks.

Unfortunately, serious injuries didn’t work that way, no matter how young or virile you were. You had to work at your own recovery. The team had done a good job on their part. Garrett just hadn’t done any of his part. He blew off his therapists with jokes and promises to do better the next time. And they all liked him, so they placated him.

He wasn’t responding to traditional treatment. Which meant he needed a new plan, something she’d been working on during her off days. She’d wanted to present it to Max and Phil, but her methods were a little beyond the norm, and she knew they’d never go for it, especially not for Garrett.

Now, it didn’t matter since she wasn’t going to be treating any of the Rivers players any longer.

Idiot. She should have just kept her mouth shut and told Garrett that he should listen to whatever Max told him. This was going to be her penance for having a mind of her own. And a big mouth.

She lifted her head as Phil and Max came through the door, along with the Rivers coach, Manny Magee.

Great. They brought the coach with them. She was definitely fired. Manny had a reputation for being fiery and loud. She might even get yelled at before they canned her ass.

She sat up straight and lifted her chin, determined to take it like the professional she was.

Correction. If she was a professional, she probably wouldn’t have told the Rivers star pitcher to pull his head out of his ass.

“Actually,” Manny said, “it was exactly what he needed to hear. ”

She frowned and shifted her gaze to the coach. “Excuse me?”

“Garrett has been the perfect specimen of a pitcher for five seasons,” Manny said. “We plucked him out of college ball, he spent six months in AAA before we brought him up, and he’s been in our starting rotation ever since, with one of the lowest ERAs of any pitcher in the league. He’s won the Cy Young Award twice, pitched a near perfect game last year, and held the strikeout record the past two seasons. He’s the golden boy. ”

She’d reviewed his file. She knew his record. But hearing it from Manny gave her an understanding. “He’s never failed. ”

Manny nodded. “At anything. He doesn’t know how. So this injury threw him for a loop, ya know? The kid is one of the nicest people I’ve ever worked with, so don’t take his black moods to heart. He’ll get that kindness back once he finds his footing. ”

She looked from Manny to Phil to Max. “Wait. I’m not fired?”

Max didn’t smile at her. She could tell he was still angry about what went down in the treatment room. “No, Alicia. You’re not fired. Instead, we’re putting you in charge of Garrett Scott’s rehab. ”

Again—oh, shit. That’s what she got for opening her mouth.

Phil and Max went over her new assignment.

“I want to try some unconventional treatment methods with him,” she said to Max.

Max balked, but she figured if she didn’t suggest it now, she might as well hand Garrett right back to him.

“Look. He’s resisting. And yes, a lot of it is in his head. But some of his problem is boredom. His treatment is rote. He’s used to the plan you’ve run him through, and so is his body. Let me try this. If it doesn’t work, we’ll alter the plan. ”

Max looked to Phil, who shrugged. “I agree it’s not a standard plan, but alternative therapies do have a high success rate with some athletes. It could work. ”

Max shrugged then turned to Alicia. “Give it a try. I want weekly reports. ”

When Garrett came in a few minutes after they left, she stood, suddenly nervous. She’d always been a fan. The Rivers were, after all, her hometown team. And Garrett was nothing short of the most gorgeous man she’d ever laid eyes on. Six feet four inches of dark-haired, dark-eyed intensity, with a leanly honed body that was a work of art.