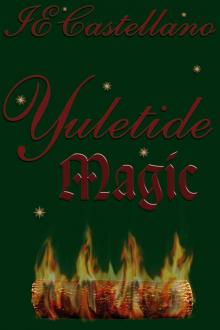 No part of this book may be reproduced or transmitted in any form or by any means, electronic or mechanical, including printing, photocopying, recording, or by any information storage and retrieval system without the written permission of the author or publisher, except where permitted by law.

This book is a work of fiction. Names, characters, places, and incidents either are products of the author’s imagination or are used fictitiously. Any resemblance to actual persons, living or dead, events, or locales is entirely coincidental.

Excerpt from The World In-between

With her eyes lightly shut, Silvia pretended to be asleep. She listened in the darkness. Hearing nothing, she crept out of bed, then tiptoed into the hall. She leaned against the doorframe, waiting until she heard the slow, rhythmic breathing of her sleeping Fairy Godmother. She descended the stairs without making a sound. With an anticipatory smile, she threw her light blue cloak around her shoulders. She sneaked out of her chambers.

Snow landed softly in her cascading waves of dark red hair. Raising her hood, she glanced at the snowflakes dancing in the lantern light before rushing across the plank and rope bridge.

Inside the trunk of the Empire Tree, she paused. Her cold, little hands raised the front of her flowered nightgown. She fluttered down the long, wooden staircase. An intense pine forest smell hit her at the bottom of the stairs.

In the semi-dark Reception Room, she saw the outline of a room filling fir. The Tenders had finished erecting the large pine before everyone had gone to sleep. In the morning, the Head Tender would present the decorated tree to her mother, the Empress.

She stepped softly around the circular room. The fir blocked the intricately carved throne and Sages’ Seal from view. Silvia inhaled deeply. When she exhaled, hundreds of tiny flames flickered over small golden candles snuggled within the branches.

Her brown eyes watched the gold ribbons and baubles shimmer in the candlelight. She basked in the soft golden glow. It was her favorite time of year. School gave her a three week vacation. She spent her time in the Empire Tree with her parents and running around the Sages’ Grove with her older brother, Martin—under their Fairy Godmothers’ close supervision, of course.

Heavy footsteps reached her ears. With a wave of her hand, the flames disappeared. Grabbing the hem of her nightgown, she hid behind the large, purple drapes that flanked the dais. She held her breath, hoping the curtain would not move.

Peering around the wall, she saw the leather uniform of the Captain of the Empire Guard. His forest green cloak billowed as the stately Elf crossed the room. Once he disappeared, Silvia scampered up the steps.

Back inside her chambers, she let out a deep breath.

“Silvia,” said a stern voice from the stairs. Her Fairy Godmother stood in the shadows.

“Are you going to tell my mother?” Silvia asked.

“Not if you go back to bed right now and stay there until morning.”

Relieved, Silvia ran up the stairs, then jumped back into her welcoming, warm bed.

When morning finally arrived, Silvia raced across the short bridge to her brother’s chambers. “Hurry up, Martin,” she yelled up his stairs. “We’re going to miss it.”

“We’re not going to miss anything,” Martin said as he clomped down the steps.

She waited impatiently for him to don his blue cloak. Martin barely had it fastened when Silvia raced him through the tree. Their Fairy Godmothers stayed on their heels.

Catching a glimpse of a ruby gown with gold trim, Silvia slowed to a trot. “This year’s Light of Life Tree is gorgeous. Don’t you agree, Silvia?”

With a smile, the Head Tender bowed. Her mother looked as though she knew Silvia wandered just hours prior. Silvia held her breath as her mother turned. She stared at the same shade of red pinned neatly on the back of her mother’s head. Her father stood next to her mother, taking her hand. They both faced their children.

Her father looked over Silvia’s and Martin’s heads. “Fly home to Fairyland for the holiday. Have a joyous Yule,” he said to their Fairy Godmothers.

“Thank you, Lord Hunter, Empress.” Both Fairies curtsied. “The same to you both.”

As the Fairies ascended the staircase, her father turned his attention lower. “Now, if you two don’t want to miss the old man’s arrival, you better get going,” he said with a smile.

Silvia and Martin scurried down the final flight of steps, then out of the double wooden doors of the Empire Tree.

Snow covered the thatched roofs of the white cob buildings, punctuated with holly, in the Sages’ Grove. The gray sky and the cold, wet smell promised more snow. They nestled between the white mounds near the village square. Villagers soon crowded around them.

Over the crunching of snow, bells jangled. Silvia’s insides gushed with excitement. “He’s coming,” she said. When the jingles echoed inside the treed wall, she craned her neck. Hooves hit the snowy path in a melodic rhythm. Finally, she spied large antlers.

The husky deer marched into the square, pulling a dark green sleigh gliding on copper rails. When they rounded the edges, Silvia rested her eyes on the gigantic log it dragged to the center.

A white bearded man jumped out of the sleigh. Without a word to anyone, he untied the log. His long, fur trimmed coat blended into the green sleigh as he worked. With a snap of his head, his ice blue eyes found Silvia in the crowd. He winked, then gave her a small nod. She smiled. Laughing heartily, he climbed into his sleigh. Leather cracked in air. Bells jingled as the old man left the Sages’ Grove for another year.

Silvia followed her brother up the path to the Empire Tree. “He winked at you, didn’t he?” Martin said as they climbed to the upper levels of the tree.

“The legend. If he winks at you, your Yuletide wish comes true,” said Martin.

While getting ready for dinner, Silvia wondered for what she should wish. As the Empress’ daughter, she had everything she could possibly want. She also had her secret.

Although she was next in line to be Empress, she had also shown the signs of being a True Sorceress—a magical gift that would fully manifest at the age of fifteen. Because True Sorcery was thought to be a myth, she needed to keep her magical abilities a secret from everyone except her mother.

She wanted someone—like a friend—with whom she could share her secret, who would also keep it. Alone in her chambers, she wrote her wish on a slip of paper. In her pocket, she carried the paper to dinner.

The four of them gathered around a small candlelit table in view of the softly flickering Light of Life Tree. The Yuletide dinner was a quiet, but elegant, family affair. The other inhabitants of the Empire Tree had left earlier in the day to spend Yule with their families.

After a deliciously filling meal, Silvia and her family fastened their cloaks, then headed into the village. The dark gray sky released large, white flakes. They stood shoulder to shoulder with villagers and visitors as the large Yule log started to burn.

Once the flames hugged the bark, Silvia watched people drop pieces of paper into the fire. Removing her wish-inscribed paper from her
pocket, she approached the brightly burning log. She breathed deeply. Her fingers released the folded paper. The flames gobbled the wish instantly. Her eyes followed the gray smoke until it melded with the blanketed sky.

The ring of the doorbell of her inherited Victorian reminded Silvia of her appointment, bringing her out of her childhood memory. The kitchen magically set coffee and cookies onto a silver tray. While she walked to her stained glass front door, she wondered whom Martin sent her. She turned the old brass handle.

Kind, brown eyes topped with warm, dark brown hair stood tall on her covered porch. “Hi, my name is Berty Chase,” he finally said. “I am from the Post…”

“Yes, of course. Please, come in,” she said. Her heart pounded as she closed the door. Into the stained glass, she smiled.

Chapter One: A Knock on the Door