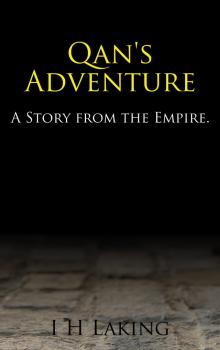 A Story from the Empire.

By I H Laking

The sun crested the horizon. Wisps of mist hung low over the rolling foothills of Khalím, jewel of the Eastern Empire. Fingers of light slowly clawed their way across the lush green mounds that gently rose out of the soup of grey lying across the ground. On one of the green foothills five figures waited on horseback, watching the dawn of a new day. An important day. None of the five figures spoke a word; they simply stared at the sun as it rose, causing the sky to turn shades of pink as the breaking light chased the night’s stars from the sky. No one looked away – especially not Ruhi-Qan Sahi, for today was his Ageing. The day he would become a man.

Ruhi-Qan Sahi breathed in and out slowly, attempting to calm himself. He watched his breath as he exhaled; a puff of steam in the chilly air. Qan was a wiry young man, and his face had a smooth, olive complexion. Beyond this, his broad smile and shot of jet black hair made him the object of many young girl’s attention. On any given day, he was prone to talking too much, but in this group no one spoke a word, each lost in their own thoughts as the sun rose higher.

If you were a stranger to the Eastern lands and you happened upon this group, it would seem confusing. Each man was dressed identically in the traditional garb of the Eastern People – a long, undyed tunic that fell to just above the ankles, and a round black cap that rose at the front to form a spike, like a wave rising about the temple. Each person in this seemingly-similar group had faced The Ageing, some a long time ago. And at this moment, each was deep in the memory of their experience.

The sun continued to rise, and as it did, the land began to appear more clearly before the group. Mist roiled in the valley below, following the path of the Wadi River which flowed down from the distant mountains in the west until it eventually made its way to the Deep Sea, many leagues from where the party silently waited. In that instant, time seemed to stand still for Ruhi-Qan Sahi. Today was his day, and this moment was his moment. But in this moment he could not have been more afraid – or so he thought, until the first roar rang out and echoed around the valley.

The party seemed to shake off its silence with an assortment of nods and grunts.

Qan nodded. He could feel the energy in the valley and he knew the challenge he would soon face. But before he could leave, the ceremony must be completed. Qan turned to face the man on his right.

The man stared ahead at the sun. Silence overtook the group once again as the man appeared to contemplate the situation. Qan, impatient to begin The Ageing, started to repeat himself. “Ruhi-Kale Sahi is –“

“It is time.” The man replied, turning his head to regard the young man. Ruhi-Kale Sahi was a tall man, broad across the shoulders, with a sharp chin that was accentuated by his thin black beard. Like his son, he had a shot of black hair tucked away under his cap. He regarded his son for a minute, and then he began the traditional blessing.

Qan’s father paused, as if to take in the moment.

“Because you have earned your place among us, and because you have not shirked back from learning, today you must show your skill in battle. You must complete The Ageing.”

Another roar rolled out across the valley.

Ruhi-Kale Sahi did not flinch. He looked deep into his son’s eyes.

“Keep the faith” echoed the party, in unison.

Qan’s mentor nodded his approval. He was a rotund man, with a huge double chin that wobbled as he moved. To top off his bizarre appearance, his tunic was stretching at the seams. “Well said, Ruhi, well said. So, are there any objections?” He looked down the line to the final two figures. “Ruhi-Benn Sahi, Ruhi-Naji Sahi, what say this young man’s brothers?” Both young men turned as one, knowing their part in this ritual perfectly well. They were both five years older than Qan, tall and strong, with long dark hair and skin that had turned a dark shade of olive from many days spent roaming the foothills. Today, the brothers were ready to watch Qan follow in their footsteps. They shook their heads to show they had no objections, and Benn replied “No, Anji-Rann Kohi, may this young boy return to us a man.” The brothers then turned to look towards the valley once again. Qan regarded them quietly, feeling his nervousness growing. The brothers were so similar, it was hard to separate them – the only thing that set them apart physically was their eyes. Benn with deep blue eyes like the ocean, and Naji with brown eyes like the earth. Qan was grateful they had been able to leave their duties with the army to join him for The Ageing.

Rann now turned his attention back to Qan. “So has your family spoken, and so has your mentor agreed. You have trained for this day; for sixteen years in this land, you have been a boy. Today you may enter the courts of our people as a man. Fulfil your-” Once more a loud roar rang out through the valley, and Rann paused. “-duties, and find your courage. May the ground speed your journey, and may the light deliver you safely to us once again.” he finished. “Are you ready to complete The Ageing?” He asked Qan, regarding him intently. “I am, and I will.” Qan replied. Rann smiled, and, with the completion of the formalities, he let his concern show for the first time. “Our scouts tell us this is no ordinary beast. You must be careful, Qan. Be swift, be strong, be safe. Just as I have taught you.” Qan nodded. “I will, Master Rann. I will be swift like wind, strong like water, and harsh like fire.”

With those words, Qan turned and rode down the hillside into the valley below. In the distance, he could hear the rage of his awaiting challenger. Qan’s mind was clear, like the water of the stream he rode beside as he travelled down the middle of the valley, through the wispy mist and the tall green grass. He followed the valley along until the site of his challenge appeared before him, dark and brooding in the growing light.