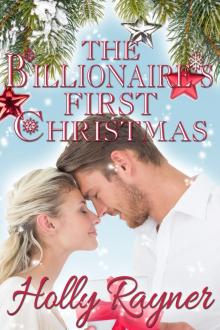 I was sitting at my desk with the windows behind me frosted over with the snow that seemed to be continuously falling in this cold city. It was only the first week of December and I was already craving my yearly vacation; this year I was headed to Belize. I’d had three phone calls this morning about the Christmas Party already. Going away every year kept me from having to endure the friendly Christmas get togethers and gift exchanges, but as CEO of Winters Inc. it couldn’t save me from the annual party. I had to re-direct the calls all back to my assistant. I paid for the party, but I didn’t take any part in arranging it. I’m no Ebenezer Scrooge. It’s not that I don’t believe in Christmas or want to deny it to anyone else; it’s just that I find no charm in it myself.

I had done my best every year to avoid all things Christmas since then, except for the party. I had an obligation to my employees, one that I fully planned to continue fulfilling. I had to make an appearance and wish them well. They worked hard for me; I truly appreciated their dedication and I wanted them to know that. I also gave the yearly address to inform them all how the company had fared over the past year and what kind of changes we may be looking at in the future. I have to do it, but I don’t have to like it.

The buzzer on my desk phone went off and I picked it up.

“I’m sorry, sir but I just need one more signature from you and then I promise unless it’s a dire emergency I won’t bother you again about the party.” Janice had been with me long enough to know that enduring the Christmas season was a chore for me. She did a wonderful job of stopping it at my door. Unless it was about money, she handled it.

I’d founded my company eight years before. It was a one man operation back then and I was the man. Janice had walked in off the street one day looking for a job and because I’d just gained two new clients that same day, and I was feeling like I deserved some help, I hired her. The first six months there were times when I had to dip into my savings just to pay her. I thought so many times during that time in my life about letting her go, explaining to her that I just couldn’t afford her salary, but I didn’t do it. She was more than an outstanding employee, although not quite a friend. I didn’t have many of those. I didn’t have time for it. Back then I was working to get the company off the ground. Within a year my company was making high six figures and then I was working hard to keep it off the ground. I barely had time for myself much less a bunch of people who might expect my attention outside of work. I had to hire ten people that year and I was glad that I’d held onto Janice. If it hadn’t been for her, there were days when the whole operation would have fallen completely apart. Now, eight years later she is still my right hand gal.

“No worries, Janice. Bring them in and I’ll sign them and then I have to meet with Max over in marketing.”

I smiled as I put the phone down. I had told Janice a million times that she didn’t have to call me “sir.” For one thing, I was twenty-nine and she was fifty-one. I felt silly answering to “sir” from a woman who could have been my mother. It was so hard for people to see me as a twenty-nine year old man. When you sat behind a desk as powerful as mine, they forgot that you were only human.

Janice came bustling in. Everything she did was with haste, like the very foundation of the company depended on it. Sometimes it could be just a little bit annoying, but it had served the company well so I couldn’t complain. She was one of the employees that I appreciated so much, and one of the reasons that I showed up at the Christmas party at all.

“Here you go, sir. The first document is the mini-contract we drew up for the charity auction and the second one is for the employee gift cards.”

I signed them both, trusting Janice enough that I wasn’t going to read through a simple document for the party. When I finished she said, the same as she did every year at this time, “If your plans change or your flight gets cancelled because of weather or anything sir, please remember that you’re always welcome to spend Christmas with my family and me.”

“Thank you, Janice.” I had yet to meet her family. Maybe I am Scrooge. “I already have the trip arranged and barring a blizzard I’ll be out of this cold city before the sun sets on Christmas Eve. I’ll be in Max’s office for an hour or two if you need me.”

I gathered my tablet and the files I needed for the meeting with my Director of Marketing, Max Stone. Max was another lucky find. He’d come to me from a corporation that Winters Inc. had taken over. It wasn’t a hostile takeover per se, but it was gut-wrenching for the owners who had to sell because of age and medical issues. Max was brand new to their company when all of that happened and while I was still in the early stages of the take-over and the employees of the previous owners were up in arms about whether or not they would still have a job, I met Max purely by accident in the conference room one day. I’d slipped in, trying to find a place where I could have a moment’s peace and eat my lunch since I didn’t have an office there yet and in bursts this boisterous young man who, as I’ve found out since, never stops talking.

Without knowing who I was at the time, Max took out his own lunch, sat down and began to talk about the “tyrant” who ran the company that was “swallowing up” the one he was working for. Max went on to speak about the ideas that he still had in the works for marketing the company that I was absorbing. He had some amazing ideas and when he finally stopped talking for five minutes, I introduced myself. The look on his face was comparable to that of a man headed to the gallows to be relieved of the burden of carrying around his head. I let him sweat over it for two weeks before I had HR inform him that his position would be rolled over to the new company if he would like for it to be. He was brilliant at what he did, but he had no idea when he should keep his mouth shut. We’d become friends since then, and Max was one of the few people who worked for me that didn’t kiss my ass or cow down to me. It was a big part of why I liked him.

I took the elevator down to the third floor where marketing was located. When the elevator door slid open; for a second I thought I’d landed in a dream. There was a young lady standing there, waiting to get on. She had long, honey blonde hair and deep blue eyes, but the thing I noticed most about her was her smile. It was big and genuine and she had deep dimples on either side of her face. I was so stunned by her that I almost forgot to step off. She didn’t seem to know who I was, but she jauntily said, “Have a nice day!” nonetheless as I finally remembered this was my stop.

Before I could reply, the doors were closing. I did see that she had a lanyard and a key card around her neck, so I assumed she worked for me. I’d have to look into that after I get back from my trip. I didn’t have the time between now and then to date or cultivate any type of new relationship. Besides, during the holidays if you were dating a woman, she expected you to spend them with her. No matter how beautiful she was, that wasn’t going to happen.

Although it was hard, I re-focused on what I was doing and headed on down the hallway to Max’s office, preparing myself for an hour or two of Max’s overly enthusiastic company.