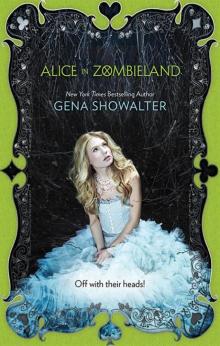 Down the Zombie Hole

I lay sprawled on a blanket in my backyard, weaving a daisy chain for my little sister. The sun shone brightly as puffy white clouds ghosted across an endless expanse of baby blue. As I breathed in the thick honeysuckle and lavender perfume of the Alabama summer, I could make out a few shapes. A long, leggy caterpillar. A butterfly with one of its wings shredded. A fat white rabbit, racing toward a tree.

Eight-year-old Emma danced around me. She wore a glittery pink ballerina costume, her pigtails bouncing with her every movement. She was a miniature version of our mother and the complete opposite of me.

Both possessed a slick fall of dark hair and beautifully uptilted golden eyes. Mom was short, barely over five-three, and I wasn’t sure Em would even make it to five-one. Me? I had wavy white-blond hair, big blue eyes and legs that stretched for miles. At five-ten, I was taller than most of the boys at my school and always stood out—I couldn’t go anywhere without getting a few what-are-you-a-giraffe? stares.

Boys had never shown an interest in me, but I couldn’t count the number of times I had caught one drooling over my mom as she walked by or—gag—heard one whistle as she bent over to pick something up.

“Al-less. ” At my side now, Em stomped her slippered foot in a bid for my attention. “Are you even listening to me?”

“Sweetie, we’ve gone over this, like, a thousand times. Your recital might start while it’s sunny out, but it’ll end at dark. You know Dad will never let us leave the house. And Mom agreed to sign you up for the program as long as you swore never to throw a tantrum when you couldn’t make a practice or a, what? Recital. ”

She stepped over me and planted those dainty pink slippers at my shoulders, her slight body throwing a large enough shadow to shield my face from the overhead glare. She became all that I could see, shimmering gold pleading down at me. “Today’s your birthday, and I know, I know, I forgot this morning…and this afternoon…but last week I remembered that it was coming up—you remember how I told Mom, right?—and now I’ve remembered again, so doesn’t that count for something? ’Course it does,” she added before I could say anything. “Daddy has to do whatever you ask. So, if you ask him to let us go, and…and…” so much longing in her tone “…and ask if he’ll come and watch me, too, then he will. ”

This year, Mom had hidden notes in drawers to remind herself (I’d found them), and as Em had claimed, my baby sis had even hinted before flat out saying, “Hey, Alice’s birthday is coming up and I think she deserves a party!” but I’d woken up this morning to the same old same old. Nothing had changed.

Whatever. I was a year older, finally sweet sixteen, but my life was still the same. Honestly, it wasn’t a big deal. I’d stopped caring a long time ago.

Em, though, she cared. She wanted what I’d never had: their undivided attention.

“Since today’s my birthday, shouldn’t you be doing something for me?” I asked, hoping to tease her into forgetting about her first ballet performance and the princess role she liked to say she “had been born to perform. ”

She fisted her hands on her hips, all innocence and indignation and, well, my favorite thing in the entire world. “Hello! Letting you do this for me is my gift to you. ”

“Yeah, because I know you want to watch me so badly you’re practically foaming at the mouth. ”

Brat. But like I could really argue with her logic. I did want to watch her.

I remember the night Emma was born. A wild mix of fear and elation had seared the memory into my mind. Just like my parents had done with me, they had opted to use a midwife who made house calls so that, when the big moment arrived, Mom wouldn’t have to leave home.

But even that plan had failed.

The sun had already set by the time her contractions started and my dad had refused to open the door to the midwife, too afraid a monster would follow her in.

So, Dad had delivered Emma while my mom nearly screamed us all to death. I had hidden under my covers, crying and shaking because I’d been so afraid.

When everything had finally quieted, I’d snuck into their bedroom to make sure everyone had survived. Dad bustled about while Mom lounged on the bed. Tentative steps had taken me to the edge, and, to be honest, I’d gasped in horror. Baby Emma had not been attractive. She’d been red and wrinkly, with the most hideous dark hair on her ears. (I’m happy to say the hair has since been shed. ) Mom had been all smiles as she waved me over to hold my “new best friend. ”

I’d settled beside her, pillows fluffing behind me, and she’d placed the wiggly bundle in my arms. Eyes so beautiful only God Himself could have created them had peered up at me, rosy lips puckering and tiny fists waving.

“What should we name her?” Mom had asked.

When short, chubby fingers had wrapped around one of mine, skin soft and warm, I’d decided that hair on the ears wasn’t such a terrible thing, after all. “Lily,” I’d replied. “We should name her Lily. ” I had a book all about flowers, and the lilies were my favorites.

My mom’s soft chuckle had washed over me. “I like that. How about Emmaline Lily Bell, since Nana’s real name is Emmaline and it’d be nice to honor my mother the way we honored your dad’s when you were born. We can call our little miracle Emma for short, and the three of us will share a wonderful secret. You’re my Alice Rose and she’s my Emma Lily, and together the two of you are my perfect bouquet. ”

I hadn’t needed time to think about that. “Okay. Deal!”

Emma had gurgled, and I’d taken that as approval.

“All right, fine,” I said on a sigh. I just couldn’t deny her. Never had, never would. “I’m not talking to Dad, though. I’m talking to Mom and making her talk to him. ”

A brilliant smile bloomed, and her bouncing started up again. “Please, Alice. You gotta talk to her now. I don’t want to be late, and if Dad agrees we’ll need to leave soon so I can warm up on stage with the other girls. Please. Nooow. ”

I sat up and placed the daisies around her neck. “You know the likelihood of success is pretty low, right?”

A cardinal rule in the Bell household: you did not leave the house if you couldn’t return before dark. Here, Dad had worked up “reinforcements” against the monsters, ensuring none of them could get in. After dark, well, you stayed put. Anyone out in the big bad world was without any type of protection and considered open season.

My father’s paranoia and delusion had caused me to miss numerous school activities and countless sporting events. I’d never even been on a date. Yes, I could have gone on a weekend lunch date and other craptasticly lame things like that, but honestly? I had no desire for a boyfriend. I never wanted to have to explain that my dad was certifiable, or that he sometimes locked us in the “special” basement he’d built as added protection from a boogeyman that did not exist. Yeah, just peachy.

Em threw her arms around me. “You can do it, I know you can. You can do anything!”

Laughing, I lunged for her. She squealed and darted off. I’d run the hose over myself about half an hour ago, hoping to cool down. Not that I’d tell her. The fun of sibling torture, and all that.

“Stay out here, okay?” Mom would say something that would hurt her feelings, and I’d say something to make her feel bad for asking me to do this, and she’d cry. I hated when she cried.

“Sure, sure,” she said, palms up in a gesture of innocence.

“I can’t believe you’d doubt me. ” A delicate hand fluttered over her heart. “That hurts, Alice. That really hurts. ”

“First, major congrats. Your acting has improved tremendously,” I said with a round of applause. “Second, say the words or I’ll return to working on a tan I’ll never achieve. ”

Grinning, she rose on her toes, stretched out her arms and slowly spun on one leg. The sun chose that moment to toss out an amber ray, creating the perfect spotlight for her perfect pirouette. “Okay, okay. I promise. Happy now?”

“Sublimely. ” She might be devious, but she never broke a promise.

“Watch me pretend I know what that means. ”

With all the enthusiasm of a firing squad candidate, I stood and turned toward our house, a two-story my dad had built in the prime of his construction days, with brown brick on the bottom and brown-and-white-striped wood on the top. Kind of boxy, amazingly average and absolutely, one hundred percent forgettable. But then, that’s what he’d been going for, he’d said.

My flip-flops clapped against the ground, creating a mantra inside my head. Don’t. Fail. Don’t. Fail. Finally I stood at the glass doors that led to our kitchen and spotted my mom, bustling from the sink to the stove and back again. I watched her, a bit sick to my stomach.