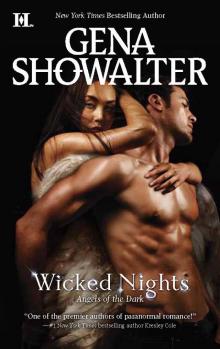 THE MORNING OF HER eighteenth birthday, Annabelle Miller woke from the most amazing dream feeling as if her eyes had been ripped out, dipped in acid and shoved back into their sockets. She became aware of the sensation gradually, her mind still fogged from sleep. When full awareness finally struck, her entire body tensed and bowed, a scream ripping free of her throat.

She pried her swollen eyelids apart, but…there was no dawning light. Only darkness greeted her.

The pain spread, riding the too-swift tides in her veins and threatening to burst through her skin. She rubbed at her face, even clawed, hoping to remove whatever was causing the problem, but there was nothing out of the ordinary. No bumps, no scratches. No…wait. There was something. A warm liquid now coated her hands.

Another scream left her, followed by another and another, each like a serrated piece of glass scraping her throat raw. In seconds, panic chewed her up and spit her out. She was blind, bleeding—and dying?

The whine of hinges, the clack of high heels against the hardwood floor. “Annabelle? Are you all right?” A pause, then a hiss of breath. “Oh, baby, your eyes. What happened to your eyes? Rick! Rick! Hurry!”

A curse was followed by the pound of hard, fast footsteps. A second later, a horrified gasp filled her bedroom. “What happened to her face?” her father bellowed.

“Annabelle, sweetheart. ” Her dad, now so tender and concerned. “Can you hear me? Can you tell me what happened to you?”

Annabelle tried to speak—Daddy, help me, please, help me—but the words became diamond hard and too jagged to swallow. And oh, dear heaven, the burn migrated to her chest, flames sparking every time her heart beat.

Strong arms slid under her, one at her shoulders, the other at her knees, and lifted her. The movement, temperate though it was, jostled her, magnifying the pain and she moaned.

“I’ve got you, sweetheart,” her dad assured her. “We’ll get you to the hospital and everything will be okay. I promise. ”

Her dad carried her to the SUV in the garage and laid her across the backseat as her mother’s sobs echoed. Her dad didn’t bother with a buckle, just shut the door and sealed Annabelle inside. She expected his door to open next, then her mom’s. She expected her parents to climb inside and drive her to the hospital, as promised, but…nothing.

Annabelle waited…and waited…seconds ticking by with excruciating slowness, the raggedness of her inhalations becoming laced with the taint of rotten eggs, fetid and sharp enough to nip at her nostrils. She cringed, confused and frightened by the change in the air.

“Daddy?” she said. Her ears twitched as she listened intently for his reply, but all she heard was…

Muffled voices through the glass.

The shrill grind of metal being scratched.

…a grunt of agony.

“Go inside, Saki,” her father shouted in a terrified tone Annabelle had never before heard him use. “Now!”

Grimacing through the pain, Annabelle managed to struggle into a sitting position. Miraculously, the unbearable blaze in her eyes at last faded. As she wiped away the blood, tiny rays of light pierced her line of vision. One second passed, two, then the light spread, colors appearing, blue here, yellow there, until she was taking in the full scope of the garage.

“I’m not blind!” she cried, but her relief was short-lived.

She spotted her father, shielding her mother against the far wall, his gaze darting this way and that but never landing on anything specific. Grisly cuts marred his cheeks, blood drip…dripping from each.

Shock and horror blended, becoming an unstoppable avalanche tumbling through every inch of her. What had happened to him? There was no one else in the small enclosure and—

A man materialized in front of her parents.

Annabelle scrambled backward, hitting the other side of the car. The newcomer wasn’t a man but a creature plucked from the depths of her worst nightmare. Another scream formed, this one lodging in her desiccated throat. Suddenly she couldn’t breathe, could only stare in revulsion.

The…thing was freakishly tall, the top of its head brushing against a ceiling she couldn’t reach with a stepladder. It possessed a barbarian’s oversize bones and fangs she’d only ever read about in vampire novels, with skin the darkest shade of crimson and as smooth as glass. Claw-tipped fingers dripped with blood. Gnarled wings of pitted black stretched from its back, and small horns protruded along the length of its spine. A long, thin tail curled from the base, ending in a blood-soaked metal spike that clanged against the concrete floor as it swished back and forth, back and forth.

Whatever it was, she suspected it had caused her father’s injuries—and it would only cause more.

Fear overcame every other emotion inside her, yet still she lurched forward, banged her fist against the window and forced her voice to work. “Leave my parents alone!”

The beast looked back at her with shockingly lovely eyes that reminded her of newly cut rubies. It flashed those razored fangs in a parody of a grin—before slashing its claws across her father’s throat.

In an instant, flesh tore and blood sprayed a thin line over the car window. Her father fell…hit the ground…his hands wrapped around his weeping throat, his mouth open as he gasped for air he couldn’t, wouldn’t, find.

A sob left her, formed from incredulity but sharpened by rage.

Her mother shrieked, scanning the garage with wide eyes as her father had done, as if she had no idea where the threat had come from. Her hands tented over her mouth and tears tracked down her cheeks, smearing the blood already splattered there.

A forked tongue flicked out, as though tasting her fear. “I like the way you beg, female. ”

“Stop!” Annabelle shouted. Have to help her, have to help her. She wrenched open the car door and flew out, only to slip in a pool of her father’s—no. No, no, no. Gagging, she fought to stay upright. “You have to stop!”

More eerie laughter—before those claws struck, silencing her mother. Her mother, who collapsed.

Shocked, Annabelle stopped fighting. She toppled to the floor, uncaring as oxygen burst from her lungs. Her mother…on top of her father…twitching…stilling.

“This can’t be happening,” she babbled. “This isn’t happening. ”

“Oh, yes,” the creature said in a deep, rasping voice. She caught the undertone of amusement, as if her parents’ murder was nothing but a game.

No. Not murder. She could not accept that word. They had been assaulted, but they would pull through. They had to pull through. Her heart slammed against her ribs, bile searing a path up her chest and past her larynx. “Th-the cops are on the way,” she lied. Wasn’t that what all the experts on all the reality shows about survival said you should do to save yourself? Claim help was on the way? “Go. Leave. You don’t want to get in any more t-trouble, do y-you?”

“Hmm, I love the sound of more trouble. ” The monster turned, facing her fully, its grin expanding. “I’ll prove it. ” It began to swipe…swipe…swipe at the bodies…clothes and skin ripping, bones cracking, pulp and tis
sue flying.

Can’t… But oh, she really could. She knew. If her parents had had any chance of survival, that chance had now withered to ash.

Get up! You let that thing mutilate the people you love. Are you going to allow it to mutilate you, too? And what about your brother, upstairs, alone, probably asleep and unprepared for a slaughter?

No. NO! With a roar that sprang from a soul soon to be shredded by grief, Annabelle launched herself into that massive, boxy chest and punched at that ugly face. The monster fell back, but swiftly recovered, rolling her over and pinning her down. Wings outstretched, curtaining the rest of the world so that only the two of them existed.

Still she punched and punched and punched. For some reason, the creature never tried to claw her. In fact, it batted her hands away and tried to…kiss her? Laughing, laughing, never stopping with the laughing, it pressed its lips against hers, blew fetid breath into her mouth and shivered with sublime pleasure.

“Stop,” she cried, and it thrust its tongue so horribly deep she gagged all over again.

When it lifted its head, it left a white-hot slime behind, the disgusting substance coating the lower half of her face. Ecstasy shone in its eyes. “Now, this is going to be fun,” it said, and then it was gone, vanishing in a puff of putrid smoke.

For a long while, Annabelle felt paralyzed in mind and body. Only her emotions were on the move, and they were escalating at an alarming rate. The fear…the shock…the grief…each pressing against her chest, nearly suffocating her.

Do something! Finally, the flicker of a thought. It could return at any moment.

The realization gave her the strength to free herself from the prison. Slipping and sliding, she made her way to her parents’ bodies. Bodies she could not put back together, no matter what she tried.

Though everything inside her rebelled at the thought, she had to leave them behind if she hoped to save her brother. “Brax!” she screamed. “Brax!” She tripped her way into the house and called 911. After a hasty explanation, she dropped the phone and ran upstairs, again shouting for her brother. She found him in his bedroom, sleeping peacefully.

“Brax. Wake up. You have to wake up. ” No matter how hard she shook him, he merely muttered about wanting a few minutes more.

Wicked Nights by Gena Showalter / Fantasy / Romance & Love have rating 4.3 out of 5 / Based on47 votes