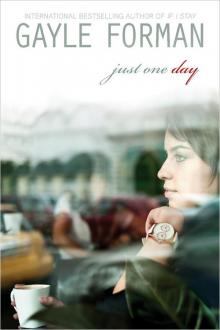 What if Shakespeare had it wrong?

To be, or not to be: that is the question. That’s from Hamlet’s—maybe Shakespeare’s—most famous soliloquy. I had to memorize the whole speech for sophomore English, and I can still remember every word. I didn’t give it much thought back then. I just wanted to get all the words right and collect my A. But what if Shakespeare—and Hamlet—were asking the wrong question? What if the real question is not whether to be, but how to be?

The thing is, I don’t know if I would have asked myself that question—how to be—if it wasn’t for Hamlet. Maybe I would have gone along being the Allyson Healey I had been. Doing just what I was supposed to do, which, in this case, was going to see Hamlet.

“God, it’s so hot. I thought it wasn’t supposed to get this hot in England. ” My friend Melanie loops her blond hair into a bun and fans her sweaty neck. “What time are they opening the doors, anyhow?”

I look over at Ms. Foley, who Melanie and pretty much the rest of our group has christened Our Fearless Leader behind her back. But she is talking to Todd, one of the history grad students co-leading the trip, probably telling him off for something or other. In the Teen Tours! Cultural Extravaganza brochure that my parents presented to me upon my high school graduation two months ago, the Todd-like graduate students were called “historical consultants” and were meant to bolster the “educational value” of the Teen Tours! But so far, Todd has been more valuable in bolstering the hangovers, taking everyone out drinking almost every night. I’m sure tonight everyone else will go extra wild. It is, after all, our last stop, Stratford-upon-Avon, a city full of Culture! Which seems to translate into a disproportionate number of pubs named after Shakespeare and frequented by people in blaring white sneakers.

Ms. Foley is wearing her own snow-white sneakers—along with a pair of neatly pressed blue jeans and a Teen Tours! polo shirt—as she reprimands Todd. Sometimes, at night, when everyone else is out on the town, she will tell me she ought to call the head office on him. But she never seems to follow through. I think partly because when she scolds, he flirts. Even with Ms. Foley. Especially with Ms. Foley.

“I think it starts at seven,” I say to Melanie. I look at my watch, another graduation present, thick gold, the back engraved Going Places. It weighs heavy against my sweaty wrist. “It’s six thirty now. ”

Rome? Was it six days ago? Or sixteen? All of Europe has become a blur of airports, buses, old buildings, and prix-fixe menus serving chicken in various kinds of sauce. When my parents gave me this trip as a big high-school graduation present, I was a little reluctant to go. But Mom had reassured me that she’d done her research. Teen Tours! was very well regarded, noted for its high-quality educational component, as well as the care that was taken of its students. I would be well looked after. “You’ll never be alone,” my parents had promised me. And, of course, Melanie was coming too.

And they were right. I know everyone else gives Ms. Foley crap for the eagle eye she keeps on us, but I appreciate how she is always doing a head count, even appreciate how she disapproves of the nightly jaunts to local bars, though most of us are of legal drinking age in Europe—not that anyone over here seems to care about such things anyway.

I don’t go to the bars. I usually just go back to the hotel rooms Melanie and I share and watch TV. You can almost always find American movies, the same kinds of movies which, back at home, Melanie and I often watched together on weekends, in one of our rooms, with lots of popcorn.

“I’m roasting out here,” Melanie moans. “It’s like middle of the afternoon still. ”

I look up. The sun is hot, and the clouds race across the sky. I like how fast they go, nothing in their way. You can tell from the sky that England’s an island. “At least it’s not pouring like it was when we got here. ”

“Do you have a pony holder?” Melanie asks. “No, of course you don’t. I bet you’re loving your hair now. ”

My hand drifts to the back of my neck, which still feels strange, oddly exposed. The Teen Tour! had begun in London, and on the second afternoon, we’d had a few free hours for shopping, which I guess qualifies as culture. During that time, Melanie had convinced me to get my hair bobbed. It was all part of her precollege reinvention scheme, which she’d explained to me on the flight over: “No one at college will know that we were AP automatons. I mean, we’re too pretty to just be brainiacs, and at college, everyone will be smart. So we can be cool and smart. Those two things will no longer be mutually exclusive. ”

For Melanie, this reinvention apparently meant the new heavy-on-skimp wardrobe she’d blown half her spending money on at Topshop, and the truncating of her name from Melanie to Mel—something I can’t quite remember to do, no matter how many times she kicks me under the table. For me, I guess it meant the haircut she talked me into.

I’d freaked out when I’d seen myself. I’ve had long black hair and no bangs for as long as I can remember, and the girl staring back at me in the salon mirror didn’t look like anything like me. At that point, we’d only been gone two days, but my stomach went hollow with homesickness. I wanted to be back in my bedroom at home, with my familiar peach walls, my collection of vintage alarm clocks. I’d wondered how I was ever going to handle college if I couldn’t handle this.

But I’ve gotten used to the hair, and the homesickness has mostly gone away, and even if it hasn’t, the tour is ending. Tomorrow, almost everyone else is taking the coach straight to the airport to fly home. Melanie and I are catching a train down to London to stay with her cousin for three days. Melanie is talking about going back to the salon where I got my bob to get a pink streak in her hair, and we’re going to see Let It Be in the West End. On Sunday, we fly home, and soon after that, we start college—me near Boston, Melanie in New York.

I look up. A group of about a dozen people are coming up and down the line, handing out multicolored neon flyers. I can tell straightaway that they’re not American—no bright white tennis shoes or cargo shorts in sight. They are all impossibly tall, and thin, and different looking, somehow. It’s like even their bone structure is foreign.

“Oh, I’ll take one of those. ” Melanie reaches out for a flyer and uses it to fan her neck.

“What’s it say?” I ask her, looking at the group. Here in touristy Stratford-upon-Avon, they stand out like fire-orange poppies in a field of green.

Melanie looks at the flyer and wrinkles her nose. “Guerrilla Will?”

A girl with the kind of magenta streaks Melanie has been coveting comes up to us. “It’s Shakespeare for the masses. ”

“Yeah,” the magenta-haired girl says in accented English. “Not for capitalist gain. How Shakespeare would’ve wanted it. ”

“You don’t think he’d want to actually sell tickets and make money from his plays?” I’m not trying to be a smart-ass, but I remember that movie Shakespeare in Love and how he was always owing money to somebody or other.

The girl rolls her eyes, and I start to feel foolish. I look down. A shadow falls ov
er me, momentarily blocking out the glare of the sun. And then I hear laughter. I look up. I can’t see the person in front of me because he’s backlit by the still-bright evening sun. But I can hear him.

“I think she’s right,” he says. “Being a starving artist is not so romantic, maybe, when you’re actually starving. ”

I blink a few times. My eyes adjust, and I see that the guy is tall, maybe a full foot taller than I am, and thin. His hair is a hundred shades of blond, and his eyes so brown as to almost be black. I have to tilt my head up to look at him, and he’s tilting his head down to look at me.

“But Shakespeare is dead; he’s not collecting royalties from the grave. And we, we are alive. ” He opens his arms, as if to embrace the universe. “What are you seeing?”

“Ah, Hamlet. ” His accent is so slight as to be almost imperceptible. “I think a night like this, you don’t waste on tragedy. ” He looks at me, like it’s a question. Then he smiles. “Or indoors. We are doing Twelfth Night. Outside. ” He hands me a flyer.

“We’ll think about it,” Melanie says in her coy voice.

The guy raises one shoulder and cocks his head toward it so his ear is almost touching his very angular shoulder blade. “What you will,” he says, though he’s looking at me. Then he saunters off to join the rest of his troupe.

Melanie watches them go. “Wow, why are they not on the Teen Tours! Cultural Extravaganza? That’s some culture I could get into!”

I watch them leave, feeling a strange tug. “I’ve seen Hamlet before, you know. ”

Melanie looks at me, her eyebrows, which she has overly plucked into a thin line, raised. “Me too. It was on TV, but still . . . ”

“We could go . . . to this. I mean, it would be different. A cultural experience, which is why our parents sent us on this tour. ”

Melanie laughs. “Look at you, getting all bad! But what about Our Fearless Leader? It looks like she’s gearing up for one of her head counts. ”

Melanie looks at me for a second, then something clicks. She licks her lips, grins, and then crosses her eyes. “Oh, yeah. I totally have heatstroke. ” She turns to Paula, who’s from Maine and is studiously reading a Fodor’s guide. “Paula, I’m feeling so dizzy. ”

“I think I might faint or something. I’m seeing black spots. ”

“It’s good to build a case,” Melanie whispers, enjoying this now. “Oh, I think I’m going to pass out. ”

Ms. Foley looks up from ticking names off her roll-call sheet. She comes over, her face so full of concern, I feel bad for lying. “I think Melanie, I mean Mel, is getting heatstroke. ”

“Are you poorly? It shouldn’t be much longer now. And it’s lovely and cool inside the theater. ” Ms. Foley speaks in a strange hybrid of Britishisms with a Midwestern accent that everyone makes fun of because they think it’s pretentious. But I think it’s just that she’s from Michigan and spends a lot of time in Europe.

“I feel like I’m going to puke. ” Melanie pushes on. “I would hate to do that inside the Swan Theatre. ”

Ms. Foley’s face wrinkles in displeasure, though I can’t tell if it is from the idea of Melanie barfing inside the Swan or using the word puke in such close proximity to the Royal Shakespeare Company. “Oh, dear. I’d better escort you back to the hotel. ”

“No! It’s my responsibility to take her. I simply couldn’t burden you like that. ” I can see the argument she’s having with herself play out over her pinched features.