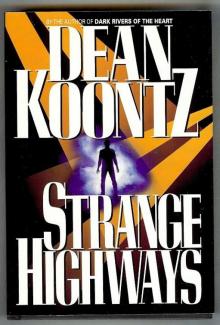 ON THAT AUTUMN AFTERNOON, WHEN HE DROVE THE RENTAL CAR INTO Asherville, Joey Shannon broke out in an icy sweat. A sudden and intense hopelessness overcame him.

He almost hung a hard U-turn in the middle of the street. He resisted the urge to jam the accelerator to the floorboards, speed away, and never look back.

The town was as bleak as any in Pennsylvania coal country, where the mines had shut down and most good jobs had been lost decades ago. Nevertheless, it wasn’t such a desperate place that the very sight of it should chill his heart and bring him instantly to the edge of despair. He was puzzled by his peculiar reaction to this long-delayed homecoming.

Sustained by fewer than a thousand local residents and perhaps two thousand more in several smaller outlying towns, the commercial district was just two blocks long. The two- and three-story stone buildings—erected in the 1850s and darkened by a century and a half of grime—were pretty much as he remembered them from his youth.

Evidently the merchants’ association or the town council was engaged in a beautification project. All the doors, the window frames, the shutters, and the eaves appeared to have been freshly painted. Within the past few years, circular holes had been cut out of the sidewalks to allow the planting of young maple trees, which were now eight feet tall and still lashed to support poles.

The red and amber autumn foliage should have enlivened the town, but Asherville was grim, huddled, and forbidding on the brink of twilight. Balanced on the highest ridges of the western mountains, the sun seemed strangely shrunken, shedding light that didn’t fully illuminate anything it touched. In the sour-yellow glow, the rapidly lengthening shadows of the new trees reached like grasping hands onto the cracked blacktop.

Joey adjusted the car heater. The greater rush of hot air did not immediately warm him.

Above the spire of Our Lady of Sorrows, as the retiring sun began to cast off purple cloaks of twilight, an enormous black bird wheeled in circles through the sky. The winged creature might have been a dark angel seeking shelter in a sacred bower.

A few people were on the streets, others in cars, but he didn’t recognize any of them. He’d been gone a long time. Over the years, of course, people changed, moved away. Died.

When he turned onto the gravel driveway at the old house on the east edge of town, his fear deepened. The clapboard siding needed fresh paint, and the asphalt-shingle roof could have used repair, but the place wasn’t ominous by any measure, not even as vaguely Gothic as the buildings in the heart of town. Modest. Dreary. Shabby. Nothing worse. He’d had a happy childhood here in spite of deprivation. As a kid, he hadn’t even realized that his family was poor; that truth hadn’t occurred to him until he went away to college and was able to look back on their life in Asherville from a distance. Yet for a few minutes, he waited in the driveway, overcome by inexplicable dread, unwilling to get out of the car and go inside.

He switched off the engine and the headlights. Although the heater hadn’t relieved his chill, he immediately grew even colder without the hot air from the vents.

Maybe he was afraid of facing up to his guilt and coming to terms with his grief. He hadn’t been a good son. And now he would never have another opportunity to atone for all the pain that he had caused. Maybe he was frightened by the realization that he would have to live the rest of his life with the burden of what he’d done, with his remorse unexpressed and forgiveness forever beyond reach.

No. That was a fearful weight, but it wasn’t what scared him. Neither guilt nor grief made his mouth go dry and his heart pound as he stared at the old homestead. Something else.

In its wake, the recessional twilight drew in a breeze from the northeast. A row of twenty-foot pines stood along the driveway, and their boughs began to stir with the onset of night.

At first Joey’s mood seemed extraordinary: a portentous sense that he was on the brink of a supernatural encounter. It was akin to what he had sometimes felt as an altar boy a long time ago, when he’d stood at the priest’s side and tried to sense the instant at which the ordinary wine in the chalice became the sacred blood of Christ.

After a while, however, he decided that he was being foolish. His anxiety was as irrational as any child’s apprehension over an imaginary troll lurking in the darkness under his bed.

He got out of the car and went around to the back to retrieve his suitcase. As he unlocked the trunk, he suddenly had the crazy notion that something monstrous was waiting in there for him, and as the lid rose, his heart knocked explosively against his ribs. He actually stepped back in alarm.

The trunk contained only his scuffed and scarred suitcase, of course. After taking a deep breath to steady his nerves, he withdrew the single piece of luggage and slammed the trunk lid.

He needed a drink to settle his nerves. He always needed a drink. Whiskey was the only solution that he cared to apply to most problems. Sometimes, it even worked.

The front steps were swaybacked. The floorboards on the porch hadn’t been painted in years, and they creaked and popped noisily under his feet. He wouldn’t have been surprised if he had crashed through the rotting wood.

The house had deteriorated in the two decades since he had last seen it, which surprised him. For the past twelve years, on the first of each month, his brother had sent a generous check to their father, enough to allow the old man either to afford a better house or to renovate this place. What had Dad been doing with the money?

The key was under the rubber-backed hemp mat, where he’d been told that he would find it. Though Asherville might give him the heebie-jeebies, it was a town where a spare key could be kept in an obvious place or a house could even be left unlocked with virtually no risk of burglary.

The door opened directly into the living room. He put his bag at the foot of the stairs to the second floor.

He switched on the lights.

The sofa and the armchair recliner were not the same as those that had been there twenty years ago, but they were so similar as to be indistinguishable from the previous furniture. Nothing else appeared to have been changed at all—except the television, which was big enough to belong to God.

The rest of the first floor was occupied by the combined kitchen and dining area. The green Formica table with its wide chrome edge band was the one at which they had eaten meals throughout his childhood. The chairs were the same too, although the tie-on cushions had been changed.

He had the curious feeling that the house had been untenanted for an age, sealed tomb-tight, and that he was the first in centuries to invade its silent spaces. His mother had been dead sixteen years, his dad for only a day and a half, but both seemed to have been gone since time immemorial.

In one corner of the kitchen was the cellar door, on which hung a gift calendar from the First National Bank. The picture for October showed a pile of orange pumpkins in a drift of leaves. One had been carved into a jack-o’-lantern.

Joey went to the door but didn’t open it right away.

He clearly remembered the cellar. It was divided into two rooms, each with its own outside entrance. One contained the furnace and the hot-water heater. The other had been his brother’s room.

For a while he stood with his hand on the old cast-iron knob. It was icy under his palm, and his body heat didn’t warm it.

The knob creaked softly when he finally turned it.

Two dim, dust-covered, bare bulbs came on when he flicked the switch: one halfway down the cellar stairs, the second in the furnace room below. But neither chased off all the darkness.

He didn’t have to go into the cellar first thing, at night. The morning would be soon enough. In fact, he could think of no reason why he had to go down there at all.