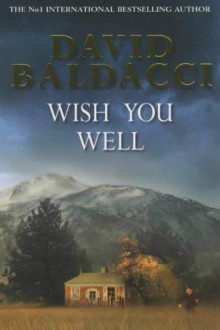 The story in Wish You Well is fictional, but the setting, other than the place names, is not. I have been to those mountains, and also was fortunate to grow up with two women who called the high rock home for many years. My maternal grandmother, Cora Rose, lived with my family in Richmond for the last ten years of her life, but spent the prior six decades or so on the top of a mountain in southwestern Virginia. At her knee I learned about that land and the life there. My mother, the youngest of ten, lived on that mountain for the first seventeen years of her life, and while I was growing up she passed along to me many fascinating stories from her youth. Indeed, both the hardships and the adventures experienced by the characters in the novel would not be unfamiliar to her.

In addition to the stories I listened to as a child, I spent considerable time interviewing my mother in preparation for writing Wish You Well, and it was an enlightening time for me, on many levels. Once we reach adulthood, most of us assume we know all there is to know about our parents and other family members. However, if you take the time to ask questions and actually listen to the answers, you may find there is still much to learn about people so close to you. Thus this novel is, in part, an oral history of both where and how my mother grew up. Oral histories are a dying art, which is sad indeed, for they show appropriate respect for the lives and experiences of those who have come before. And, just as important, they document those remembrances, for once those lives are over, that personal knowledge is lost forever. Unfortunately, we live in a time now where everyone seems to be solely looking ahead, as though we deem nothing in the past worthy of our attention. The future is always fresh and exciting, and it has a pull on us that times past simply can never muster. Yet it may well be that our greatest wealth as human beings can be "discovered" by simply looking behind us.

Though I am known for my suspense novels, I have always been drawn to stories of the past in my native Virginia, and tales of people living in places that sharply limited their ambitions, yet provided them with a richness of knowledge and experience few have ever attained. Ironically, as a writer, I've spent the last twenty years or so hunting relentlessly for story material, and utterly failed to see a lumberyardful within my own family. However, while it came later than it probably should have, writing this novel was one of the most rewarding experiences of my life.

THE AIR WAS MOIST, THE COMING RAIN TELEGRAPHED by plump, gray clouds, and the blue sky fast fading. The 1936 four-door Lincoln Zephyr sedan moved down the winding road at a decent, if unhurried, pace. The car's interior was filled with the inviting aromas of warm sourdough bread, baked chicken, and peach and cinnamon pie from the picnic basket that sat so temptingly between the two children in the backseat.

Louisa Mae Cardinal, twelve years old, tall and rangy, her hair the color of sun-dappled straw and her eyes blue, was known simply as Lou. She was a pretty girl who would almost certainly grow into a beautiful woman. But Lou would fight tea parties, pigtails, and frilly dresses to the death. And somehow win. It was just her nature.

The notebook was open on her lap, and Lou was filling the blank pages with writings of importance to her, as a fisherman does his net. And from the girl's pleased look, she was landing fat cod with every pitch and catch. As always, she was very intent on her writing. Lou came by that trait honestly, as her father had such fever to an even greater degree than his daughter.

On the other side of the picnic basket was Lou's brother, Oz. The name was a contraction of his given one, Oscar. He was seven, small for his age, though there was the promise of height in his long feet. He did not possess the lanky limbs and athletic grace of his sister. Oz also lacked the confidence that so plainly burned in Lou's eyes. And yet he held his worn stuffed bear with the unbreakable clench of a wrestler, and he had a way about him that naturally warmed other's souls. After meeting Oz Cardinal, one came away convinced that he was a little boy with a heart as big and giving as God could bestow on lowly, conflicted mortals.

Jack Cardinal was driving. He seemed unaware of the approaching storm, or even the car's other occupants. His slender fingers drummed on the steering wheel. The tips of his fingers were callused from years of punching the typewriter keys, and there was a permanent groove in the middle finger of his right hand where the pen pressed against it. Badges of honor, he often said.

As a writer, Jack assembled vivid landscapes densely populated with flawed characters who, with each turn of the page, seemed more real than one's family. Readers would often weep as a beloved character perished under the writer's nib, yet the distinct beauty of the language never overshadowed the blunt force of the story, for the themes imbedded in Jack Cardinal's tales were powerful indeed. But then an especially well-tooled line would come along and make one smile and perhaps even laugh aloud, because a bit of humor was often the most effective tool for painlessly driving home a serious point.

Jack Cardinal's talents as a writer had brought him much critical acclaim, and very little money. The Lincoln Zephyr did not belong to him, for luxuries such as automobiles, fancy or plain, seemed forever beyond his reach. The car had been borrowed for this special outing from a friend and admirer of Jack's work. Certainly the woman sitting next to him had not married Jack Cardinal for money.

Amanda Cardinal usually bore well the drift of her husband's nimble mind. Even now her expression signaled good-natured surrender to the workings of the man's imagination, which always allowed him escape from the bothersome details of life. But later, when the blanket was spread and the picnic food was apportioned, and the children wanted to play, she would nudge her husband from his literary alchemy. And yet today Amanda felt a deeper concern as they drove to the park. They needed this outing together, and not simply for the fresh air and special food. This surprisingly warm late winter's day was a godsend in many ways. She looked at the threatening sky.

To ease her skittish nerves, Amanda turned and looked at Oz and smiled. It was hard not to feel good when looking at the little boy, though he was a child easily frightened as well. Amanda had often cradled her son when Oz had been seized by a nightmare. Fortunately, his fearful cries would be replaced by a smile when Oz would at last focus on her, and she would want to hold her son always, keep him safe always.

Oz's looks came directly from his mother, while Lou had a pleasing variation of Amanda's long forehead and her father's lean nose and compact angle of jaw. And yet if Lou were asked, she would say she took after her father only. This did not reflect disrespect for her mother, but signaled that, foremost, Lou would always see herself as Jack Cardinal's daughter.

Amanda turned back to her husband. "Another story?" she asked as her fingers skimmed Jack's forearm.

The man's mind slowly rocked free from his latest concocting and Jack looked at her, a grin riding on full lips that, aside from the memorable flicker of his gray eyes, were her husband's most attractive physical feature, Amanda thought.

"Take a breath, work on a story," said Jack.

"A prisoner of your own devices," replied Amanda softly, and she stopped rubbing his arm.

As her husband drifted back to work, Amanda watched as Lou labored with her own story. Mother saw the potential for much happiness and some inevitable pain in her daughter. She could not live Lou's life for her, and Amanda knew she would have to watch her little girl fall at times. Still, Amanda would never hold out her hand, for Lou being Lou would certainly refuse it. But if her daughter's fingers sought out her mother's, she would be there. It was a situation burdened with pitfalls, yet it seemed the one destined for mother and daughter.

Head down, hand moving with the flourishing thrust of youthful penmanship, Lou said, "Fine." Amanda could easily sense her daughter's underlying message: that writing was a task not to be discussed with nonwriters. Amanda took it as good-naturedly as she did most things having to do with her volatile daughter. But even a mother sometimes needed a comforting pillow on which to lay her head, so Amanda reached out and tousled her son's blondish hair. Sons were not nearly so complex, and as much as Lou wore her out, Oz rejuvenated his mother.

The little boy answered by letting out a crowing sound that banged off all sides of the car's interior, startling even the inattentive Jack.

"Miss English said I'm the best rooster she's ever heard," said Oz, and crowed again, flapping his arms. Amanda laughed and even Jack turned and smiled at his son.

Lou smirked at her brother, but then reached over and tenderly patted Oz on the hand. "And you are too, Oz. A lot better than me when I was your age," said Lou.

Amanda smiled at Lou's remark and then said, "Jack, you're coming to Oz's school play, aren't you?"

Lou said, "Mom, you know he's working on a story. He doesn't

Wish You Well by David Baldacci / Mystery & Detective / Thrillers & Crime have rating 4.2 out of 5 / Based on38 votes