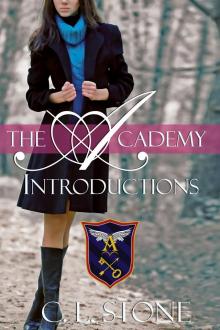 ﻿“Come on...” Victor urged under his breath, his hands twisting at the wheel.

Silas and Kota both appeared at the doors and stepped out. They tried to look casual but they were walking double time and went right for the car. Silas climbed in back with me; Kota took the front seat.

I turned, putting my knees in the seat and facing backward to look out the rear window, watching for any sign of Greg or his friends.

“Are they out there?” Victor asked.

“I think we lost them,” Kota said, sounding breathless, leaning against the seat.

“Sang, I think we're safe. You can sit,” Silas said. His finger jabbed me in my side. Unfortunately, it was the side that was bruised and I wasn’t expecting it. I winced and cried out an ouch before I could catch myself.

Silas’s eyes widened. His large hand pushed me back up against the seat. He lifted my blouse away from the top of my skirt. Cool air caressed the bruise and I shivered.

“Where did that come from?” he demanded.

He let go of me, turning his body to face the door. His hand clutched the handle. “Turn the car around.”

His fists clenched and he spoke through his teeth. “I said turn it around.”

This book is a work of fiction and any resemblance to persons, living or dead, or places, events or locales is purely coincidental. The characters are productions of the author’s imagination and used fictitiously.

Other Books by C. L. Stone

Other Books by C. L. Stone

From The Academy Ghost Bird Series:

From The Academy Scarab Beetle Series

Thank you, Terese, for beta reading and being awesome.

Thank you, Chrystal, for putting me on the path for the best thing I've ever done. Writing will forever be different for me.

Thank you, Karin, for being the best cheerleader ever.

Thank you, WPLH, and all friends for putting up with our craziness – Monday through Weekend Warrior Days.

Thank you, Chad, for putting up with my obsessions.

My heart thundered under my breast. I was sure my parents could hear me, asleep in their beds inside the two story, gray-siding clad house on Sunnyvale Court.

Rain puddled at my feet, soaking the dirt of a thousand walks into my off-brand tennis shoes. I usually enjoyed the rain. I liked the feel of walking barefoot through puddles in the grass and the smell of rain mixed with pine trees. Tonight, the rain was cool and the air crisp against my skin for early August in South Carolina. I would be out all night, though, so this was completely bad timing.

With my toes pointed out to the street, I stood at the edge of the long driveway. A cool wind split through my dark poncho. I wanted to shiver, but I steeled myself and ignored the cold.

This is it, I told myself. If you’re going to leave, you need to do it now.

A new house sat half-finished around the bend of Sunnyvale. I’d explored it yesterday while on a walk and discovered the back door was unlocked.

My hand gripped the straps of my overloaded backpack. One night, I told myself. One night where I’m not sleeping under the same roof as my parents. I’m not going to die, like my mother seems to think I would. Normal people, everyone else in the world, weren’t all murdered and raped the moment they went outside.

Thoughts of my bedroom in the house behind me flooded my mind: the soft green comforter, the mauve carpet, the warmth of the cotton sheets, a quiet symphony playing from the stereo. I shook my head at the thought, lifting a hand to my brow to flick away the collection of water there. No. I had already made the decision. Besides, it was too late to turn back. Sneaking out of the house was hard enough to do at night. I wouldn’t want to be caught trying to sneak back in.

I forced my leg up and out to step foot on the dark pavement of the road. My parents’ house was the newest on the half-circle street, tucked away behind a forest near a new highway. There were only twenty homes in the neighborhood. In front of my parents’ house was an empty lot with room for one more house, but the land was still undeveloped. The rest of the street had several middle income homes and made for a very quiet neighborhood. Unfortunately, the street light was never installed in front of my parents’ home. Even though I knew the blacktop was flat, it made me nervous that I might trip on a stick -- or an ax murderer.

I stomped my other foot onto the road, turned left and started walking. The wind swept up around my face, and I tucked my head down to brace myself against it. I fell into the deeper shadows of the road, shielded from the glow of neighbors’ outdoor lights. I shivered as a breeze picked up around me.

Even as my heart continued to pound, I moved forward. Every second I envisioned my sister or my parents waking to find me gone and glancing out the window to spot me. Only I knew better. They probably wouldn’t notice until well into the afternoon that I was nowhere around. The reluctance I felt was only the whispers of my mother echoing in my head.

A slippery thudding sound started racing toward me. It was so soft at first that I thought it was my own heart. The sound drew closer. I imagined some maniac running barefoot toward me. I stared out into the dark, trying to use the light from the house further up the road to catch whatever it might be. I should move, I thought. I should get out of the way. I willed myself to turn around. A gust of wind swept into my face. My eyes watered.

A mass hurled itself at me and I fell back. My book bag slipped away from my body and I crashed onto my butt and my left arm. My hand and wrist scraped against the street. Something heavy and wet sat on top of me. A warm, salty breath filled my nose.

My wild imagination ran through every possibility. Rapist. Murderer. The instinct to scream swept through me but my throat caught and I only gasped. I was paralyzed.

A slobbering tongue licked my arm and then a soft, cold nose nuzzled it. My heart continued to beat but I finally took a breath, relieved.

“Hey,” a shout came from up the road, from the direction I had been heading. “Are you okay?”

My whole body went rigid again. The sound of footsteps came closer and I tried to angle myself out from underneath the dog, but it wouldn’t budge and instead continued to sit on my legs. It barked and then licked my a
rm again.

“I’m sorry,” said the voice. “Max, get off of her.” In the shadow of the street, I couldn’t tell who it was. I wasn’t that familiar with the neighbors anyway. The voice was smooth, masculine. While his tone was gentle, there was a strength hidden behind it. Since he wasn’t shouting at me or telling me he would kill me, I tried to calm my heart.

They’re not as bad as she thinks, I told myself. People aren’t all evil.

The dog was pulled away from me. The guy knelt by my side. An arm went around my shoulders, lifting me slightly. “Are you hurt?”

His touch around my shoulder sent a shiver through me that I couldn’t control. It was such a warm gesture and I wasn't used to people touching me. Through my shivering, I felt the pang at my hip where I had fallen. Pain seared through the scrapes on my arm. I coddled it to my chest. “I’m okay,” I said through my teeth. “It’s fine.”

“No, you’re not,” he said. The strength in his voice shining through more. “You scraped your arm.” He put another arm around my waist and prepped his knees. “You can stand, right?”

My cheeks flushed so hot, I could have been glowing. As much as I felt awkward, I was scared to admit that this stranger’s kind hands on me felt so reassuring. “I think so.”

He pulled me up gently with him until we were standing together. The wind whipped around us. My poncho flew like a flag behind me. He turned his body until his back was against the wind, protecting me from the worst of it. He brought his hands up to cup around my face. “I’m going to take you to my house.”

It was the first time I noticed the glasses. The light from up the road reflected in them. I still couldn’t guess his age. From what I felt of his body, he was easily a head taller than me and there was some definition to his muscles.

I blushed at the thought that I had been touching his chest.

He bent over and picked up my book bag. He grunted at first as he lifted it.

“No.” He heaved it over his shoulder. He wrapped his free arm around my shoulder and guided me up the street. “Let’s get out of this rain. We’ll assess the damage inside.”

“What about your dog?”

My heart pounded again as I followed him up the street. My hands shook, my knees quivered. I tried to think calmly, that this was just him being nice. My mother’s voice shot through my head, all her warnings swirled through my mind.

I could only hope I wasn’t on my way to die.