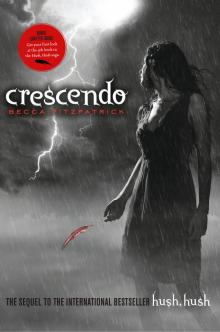 THE FINGERS OF THE THORN-APPLE TREE CLAWED at the windowpane behind Harrison Grey, and he dog-eared his page, no longer able to read through the racket. A furious spring wind had hurled itself against the farmhouse all night, howling and whistling, causing the shutters to slam against the clapboards with a repetitive bang! bang! bang! The calendar may have been turned to March, but Harrison knew better than to think spring was on its way. With a storm blowing in, he wouldn’t be surprised to find the countryside frozen in icy whiteness by morning.

To drown out the wind’s piercing cry, Harrison punched the remote, turning up Bononcini’s “Ombra mai fu. ” Then he set another log on the fire, asking himself, not for the first time, if he would have bought the farmhouse had he known how much fuel it took to warm one little room, let alone all nine.

Harrison picked it up halfway through the second ring, expecting to hear the voice of his daughter’s best friend, who had the annoying habit of calling at the latest possible hour the night before homework was due.

shallow, rapid breathing sounded in his ear before a voice broke the static. “We need to meet. How soon can you be here?”

The voice floated through Harrison, a ghost from his past, leaving him bone cold. It had been a long time since he’d heard the voice, and hearing it now could only mean something had gone wrong. Terribly wrong. He realized the phone in his hand was slick with sweat, his posture rigid.

“An hour,” he answered flatly.

He was slow to replace the handset. He shut his eyes, his mind unwillingly traveling back. There had been a time, fifteen years ago, when he froze at the sound of the phone ringing, the seconds pounding out like drums as he waited for the voice on the other end to speak. Over time, as one peaceful year replaced another, he’d eventually convinced himself he was a man who’d outrun the secrets of his past. He was a man living a normal life, a man with a beautiful family. A man with nothing to fear.

In the kitchen, standing over the sink, Harrison poured himself a glass of water and tossed it back. It was full dark outside, and his waxen reflection stared back from the window straight ahead. Harrison nodded, as if to tell himself everything would be all right. But his eyes were heavy with lies.

Setting the glass in the basin of the sink, he reached for the car keys on the counter, hesitating once as if to change his mind.

Harrison eased the car to the curb and killed the headlights.

Sitting in darkness, breath smoking, he took in the ramshackle brick row houses in a seedy section of Portland. It had been years—fifteen to be exact—since he had set foot in the neighborhood, and relying on his rusty memory, he wasn’t sure he was in the right place. He popped open the glove box and retrieved a time-yellowed scrap of paper. 1565 Monroe. He was about to swing out of the car, but the silence on the streets bothered him. Reaching beneath his seat, he pulled out a loaded Smith & Wesson and tucked it into the waistband of his pants at the small of his back. He hadn’t aimed a gun since college, and never outside a shooting range. The only clear thought in his throbbing head was that he hoped he could still say as much an hour from now.

The tap of Harrison’s shoes sounded loud on the deserted pavement, but he ignored the rhythm, choosing instead to focus his attention on the shadows cast by the silver moon. Hunkering deeper into his coat, he passed cramped dirt yards boxed in by chain-link fences, the houses beyond them dark and eerily quiet. Twice he felt as if he was being followed, but when he glanced back, there was no one.

At 1565 Monroe, he let himself through the gate and circled around to the back of the house. He knocked once and saw a shadow move behind the lace curtains.

The door opened just wide enough to admit him.

“Were you followed?” he was asked.

“Once she turns sixteen, he’ll come for her. You need to take her far away. Someplace where he’ll never find her. ” Harrison shook his head. “I don’t understand—” He was cut off by a menacing glare. “When we made this agreement, I told you there would be things you couldn’t understand. Sixteen is a cursed age in—in my world. That’s all you need to know,” he finished brusquely.

The two men watched each other, until at last Harrison gave a wary nod.

“You have to cover your tracks,” he was told. “Wherever you go, you have to start over. No one can know you came from Mai ne. No one. He’ll never stop looking for her. Do you understand?”

“I understand. ” But would his wife? Would Nora?

Harrison’s vision was adapting to the darkness, and he noted with curious disbelief that the man standing before him appeared not to have aged a day since their last meeting. In fact, he hadn’t aged a day since college, when they’d met as roommates and become fast friends. A trick of the shadows?

Harrison wondered. There was nothing else to attribute it to.

One thing had changed, though. There was a small scar at the base of his friend’s throat. Harrison took a closer look at the disfigurement and flinched. A burn mark, raised and shiny, hardly larger than a quarter. It was in the shape of a clenched fist. To his shock and horror, Harrison realized his friend had been branded. Like cattle.

His friend sensed the direction of Harrison’s gaze, and his eyes turned steely, defensive. “There are people who want to destroy me. Who want to demoralize and dehumanize me.

Together with a trusted friend, I’ve formed a society. More members are being initiated all the time. ” He stopped mid-breath, as if unsure how much more he should say, then finished hastily, “We organized the society to give us protection, and I’ve sworn all egiance to it. If you know me as well as you once did, you know I’ll do whatever it takes to protect my interests. ” He paused and added almost absently, “And my future. ”

“They branded you,” Harrison said, hoping his friend didn’t detect the repulsion that shuddered through him.

His friend merely looked at him.

After a moment, Harrison nodded, signaling he understood, even if he didn’t accept it. The less he knew, the better. His friend had made that clear too many times to count. “Is there anything else I can do?”

Harrison pushed his glasses up the bridge of his nose. He began awkwardly, “I thought you might like to know she’s grown up healthy and strong. We named her Nor—”

“I don’t want to be reminded of her name,” his friend interrupted harshly. “I’ve done everything in my power to stamp it out from my mind. I don’t want to know anything about her. I want my mind washed of any trace of her, so I’ve got nothing to give that bastard. ” He turned his back, and Harrison took the gesture to mean the conversation was over. Harrison stood a moment, so many questions at the tip of his tongue, but at the same time, knowing nothing good would come from pressing. Stifling his need to make sense of this dark world his daughter had done nothing to deserve, he let himself out.

He’d only made it a half block when a gunshot ripped through the night. Instinctively Harrison dropped low and whirled around.

His friend. A second shot was fired, and without thinking, he ran in a dead sprint back t
oward the house. He shoved through the gate and cut around the side yard. He had almost rounded the final corner when arguing voices caused him to stop. Despite the cold, he was sweating. The backyard was shrouded in darkness, and he inched along the garden wall, careful to avoid kicking loose stones that would give him away, until the back door came into sight.

“Go to hell,” his friend spat.

A third gunshot. His friend bell owed in pain, and the shooter called over him, “Where is she?”

Heart hammering, Harrison knew he had to act. Another five seconds and it could be too late. He slid his hand to his lower back and drew the gun. Two-handing it to steady his grip, he moved toward the doorway, approaching the dark-haired shooter from behind. Harrison saw his friend beyond the shooter, but when he made eye contact, his friend’s expression filled with alarm.

Harrison heard his friend’s order as loud as a bell, and for a moment believed it had been shouted out loud. But when the shooter didn’t spin around in surprise, Harrison realized with cold confusion that his friend’s voice had sounded inside his head.

No, Harrison thought back with a silent shake of his head, his sense of loyalty outweighing what he couldn’t comprehend. This was the man he’d spent four of the best years of his life with.

The man who’d introduced him to his wife. He wasn’t going to leave him here at the hands of a killer.

Harrison pulled the trigger. He heard the earsplitting shot and waited for the shooter to crumple. Harrison shot another time.

The dark-haired young man turned slowly. For the first time in his life, Harrison found himself truly afraid. Afraid of the young man standing before him, gun in hand. Afraid of death. Afraid of what would become of his family.

He felt the shots rip through him with a searing fire that seemed to shatter him into a thousand pieces. He dropped to his knees. He saw his wife’s face blur across his vision, followed by his daughter’s. He opened his mouth, their names at his lips, and tried to find a way to say how much he loved them before it was too late.

The young man had his hands on Harrison now, dragging him into the all ey at the rear of the house. Harrison could feel consciousness leaving him as he struggled without success to get his feet under him. He couldn’t fail his daughter. There would be no one to protect her. This black-haired shooter would find her and, if his friend was right, kill her.

“Who are you?” Harrison asked, the words causing fire to spread through his chest. He clung to the hope that there was still time. Maybe he could warn Nora from the next world—a world that was closing in on him like a thousand falling feathers painted black.

The young man watched Harrison for a moment before the faintest of smiles broke his ice-hard expression. “You thought wrong. It’s definitely too late. ”

Harrison looked up sharply, startled that the killer had guessed his thoughts, and couldn’t help but wonder how many times the young man had stood in this same position before to guess a dying man’s final thoughts. Not a few.

As if to prove just how practiced he was, the young man aimed the gun without a single beat of hesitation, and Harrison found himself staring into the barrel of the weapon. The light of the fired shot flared, and it was the last image he saw.