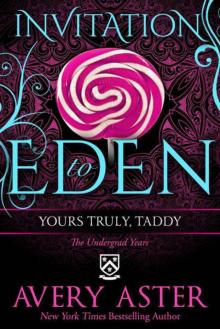 Yours Truly, Taddy (The Undergrad Years #2)

Jetting to Martinique for a modeling assignment with three of Europe’s hottest magazine photographers—Gustave, Fabian, and Leon—should’ve been easy, breezy beautiful. Never did I expect to look up and see a hole in the ceiling of our plane that was bigger in size than my Birkin bag.

Shit! We’re nose-diving toward Eden Island. I pictured how my New York Times obituary might read when I’m gone, “Taddy Brill, Manhattanite, dethroned descendant of the Austrian House of Brillford royalty, dies at age eighteen, penniless, unloved, and a virgin.” I swear this crap only happens to me. Suddenly, Leon pulls me with Fabian and Gustave. Adrenaline racing through me, our bodies clung as one. We prepared to…crash.

The Undergrad Years is a New Adult contemporary miniseries about first loves, independence, and everlasting friendships. Interact on Instagram and Twitter using the hashtags #UndergradYears #NewAdult with @AveryAster while reading this story. Swag and reader contests can be found at: AveryAster.com

Reader warning: This novel is about a girl who likes a boy who likes boys and contains mature content intended for readers 18 and up.

“Hilariously clever, Love, Lex is New Adult at its naughtiest.”

“Never did I think I could love an author as much as Avery Aster. The Manhattanites are obscenely fabulous.”

“The most original series I've ever read. The Manhattanites is expertly crafted like diving into a soap opera.”

“A throwback to Judith Krantz, Avery’s writing is salacious glitz, drama and glamour.”

“I took a cold shower after reading Unscrupulous.”

“Avery's voice is fresh and witty. Something not found in the market.”

“Plotted like Jackie Collins, the bitches are super-bitches but underneath their tough exterior is a good heart.”

“Sex and the City on steroids but younger and sexier, Avery Aster equates to fun romance.”

“The Manhattanites live an extravagant lifestyle. I want to be a part of it.”

“The shock value is high and hot flash-inducing. Trust me, I've suffered a few.”

All rights reserved. Without limiting the rights under copyright reserved above, no part of this publication may be reproduced, stored in or introduced into a retrieval system, or transmitted, in any form, or by any means (electronic, mechanical, photocopying, recording, or otherwise) without the prior written permission of both the copyright owner and the above publisher of this book.

This is a work of fiction. Names, characters, places, brands, media, and incidents are either the product of the author's imagination or are used fictitiously. The author acknowledges the trademarked status and trademark owners of various products referenced in this work of fiction, which have been used without permission. The publication/use of these trademarks is not authorized, associated with, or sponsored by the trademark owners.

This e-book is licensed for your personal enjoyment only. This e-book may not be re-sold or given away to other people. If you would like to share this book with another person, please purchase an additional copy for each recipient. If you’re reading this book and did not purchase it, or it was not purchased for your use only, then please return to your favorite e-book retailer and purchase your own copy. Thank you for respecting the hard work of this author.

This book is for the student who I met in the back of a police car during my freshman year of high school. The girl who during my sophomore year served me my first lemon drop, telling me, “You’re gonna love this!” The best friend who during my junior year set me up with a guy that changed my life—in ways I’d never imagined. The woman who gave birth to my god-daughter after we’d graduated, and the reader who, two decades later, roots for the Taddy Brill in all of us. I double-heart you Julie K! Thank you for everything. I’ll see you in St. Tropez.

My novels are escapism in the purest form. They are romantic, snarky, hot, and a li’l cray-cray. Events in this story take place in 2002 and are a figment of my imagination. Have fun!

Part One: I blame it on Lex’s Xanax

Prologue: From the Desk of Avon Porter Academy

Chapter One: Three Men and a Virgin

Tabitha Adelaide “Taddy Brill” Brillford (18): Broke but determined, Taddy accepts a job as a fashion model to pay for her college tuition.

Alexandra “Lex” Easton (18): Daughter to famed rockers Eddie & Birdie Easton, Lex and Taddy have known one another their entire lives.

Blake Morgan III (18): Prada fanatic and out of the closet since the day puberty struck, Blake is the clique’s gay bestie.

Fabian Henri (20) Flirtatious and alluring he works as Taddy’s stylist helping her get dressed.

Leon Lartique (19): Set and lighting designer Leon works with Gustave and Fabian trying to get Taddy to loosen up a bit for the camera.

I blame it on Lex’s Xanax

“My bestie Taddy Brill should’ve taken the handout we’d offered her. But nooo, she had to let her pride get in the way, accepting a modeling gig in the Caribbean to pay for her college tuition. Lex, Blake, and I jetted along for moral support. If we knew then, what we know now, we should’ve stayed home on the Upper East Side, where we belonged.” —Vive Farnworth, wealthiest teenager in New York, socialite and aspiring gossip columnist.

From the Desk of Avon Porter Academy

We enjoy having your daughter, Tabitha Adelaide, in our school. She is an exemplary student who goes out of her way to help others and is a role model among her peers.

It’s unfortunate that you didn’t send for her during the Christmas break. Our Avon Porter staff can board the students only with advanced noticed. She stayed with our gym teacher Mrs. Pringle who stated that Tabitha Adelaide is under the impression she will never see you again. At only thirteen, I wonder where she’s getting these outrageous thoughts. Please call us at your earliest convenience so we may help set your only daughter’s mind at ease.