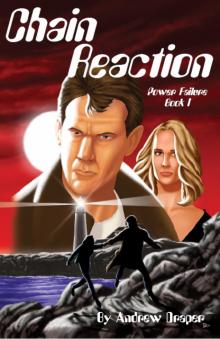 No part of this book may be reproduced in any way without the written permission of the publisher.

This story is a work of fiction. The characters, events and dialogs are the product of the author’s imagination. Any similarity to persons, living or dead, is purely coincidental and unintended.

Without the dedicated support of the people named below, this book would still be a pile of random notes scrawled on cocktail napkins and scraps of paper sitting in a box on my desk.

To my wife Gwendolyn, the anchor of my world. Her unwavering belief in my creative talent sustained me when even my own seemed to whither. Nothing good in my life exists without her.

To my parents, David and Jeanne Draper, who believed that you can achieve anything you’re willing to work for and that the value of the achievement was directly proportional to the degree of difficulty.

I only wish that my mother had lived to see this book published.

I couldn’t have done this without all of you.

Colonel Alex Freemont stalked around Jackson Verde's office like a caged panther, his lean body tensed. Nearing fifty years-old and standing a shade under six feet tall, Freemont sported a full head of dark hair with just a splash of gray at the center of his forehead. His crisp uniform lay taut, stretched over a muscular frame. His physical presence, coupled with piercing brown eyes and razor-sharp mind, made for a formidable adversary. The effect was not lost on the smaller man watching the controlled power of his movements from across the room.

Stopping in front of an ornate beveled glass window overlooking the Charles River, the soldier turned his back to the director of research and development, tucking his cap under his arm. After several seconds he turned back, now facing the man across the room. Pompous and arrogant, Freemont stood staring for a moment and Jack could almost feel him searching for the slightest sign of weakness. Then the colonel spoke, his strong voice filling the spacious room.

“Jack, we can't let research with this kind of potential fall into the wrong hands. Ryan may be a brilliant scientist, but she refuses to grasp the national security implications of her work. You’ve had plenty of time to talk to her.”

Jack groaned at the malicious barb, tension causing an involuntary clenching of his jaw.

“Alex, she’s a pure researcher,” he said, by way of diversion. “She just doesn’t think in those terms.”

Jackson “Jack” Verde, at only five-feet, seven, had to look up at his guest. Verde liked and respected junior colleague Jennifer Ryan, but the colonel’s indomitable manner proved more than a little intimidating. Below his dark, curly hair, beads of sweat formed on his forehead despite the cool temperature of the room.

Verde watched intently as Freemont renewed his pacing, the confident steps cushioned by the deep pile carpeting of his office.

“Quite frankly, I don’t care how she thinks,” Freemont snarled. “Terrorists are out there right now, thinking up new and creative ways to compromise the security of this nation. If her work can be of value to the safety of this country, I want it…period.”

Jack thought back on his limited contact with the career military man over the past six months and his stomach lurched in revulsion. He hated the man and despised his Gestapo methods.

He’d waterboard his own Grandmother. Jack thought, watching the man complete yet another circuit of the room.

Colonel Alex Freemont was as cold and ruthless a personality as Jack had ever encountered. He also knew without a doubt that he had no choice in the matter. His mind raced, looking for a way to defuse the dangerous situation he unwilling found himself in.

Jack slowly walked to the elegant bar built in to the far wall of his office. Sliding the glass door to one side, he reached into the cabinet above and removed a laser-monogrammed cocktail glass, placing it before him on a silver serving tray.

Adorning the bar’s top sat a matching set of crystal decanters filled with exotic distillations from around the world. It was only 8:45 in the morning, but Verde already knew this day would best be endured with the aid of a little liquid courage. Jack looked at his reflection in the bar’s polished mahogany surface and didn't much like the view. Selecting the largest of the elegant carafes, he poured himself three fingers of first-class Kentucky whiskey, intentionally neglecting to offer anything to his unwelcome and domineering guest.

He swallowed deeply, the liquor burning a trail of fire down his throat before searing his tightly knotted stomach. He stared into the translucent brown liquid of the half-empty glass, regretting the day he ever told Colonel Alex Freemont about the ‘Ever-cell’ project.

Why couldn’t I have just kept my mouth shut? He mentally castigated himself, cursing his unbridled hubris and the unintended consequences. When will I ever learn?

On the other side of the room, Freemont elongated his orbital path to meet Verde at the bar. Coming face to face with Jack, he spoke, the words weighted with a controlled venom that made the hair on the back of the smaller man’s neck stand up.

“I'll say this one more time,” Freemont’s deep, resonant voice filled the room, the tones strong and confident. “You tell Dr. Ryan to prepare for me to assume control of her project,” he paused to breathe deeply. “I don’t need to remind you that this lab exists to serve the Army, do I?”

Jack blinked several times while the caustic remark saturated his chaotic mind, causing tendrils of fear to spread through his consciousness. He cleared his throat, using the time to carefully gather his thoughts.

“With all due respect colonel, Diversified Research is a private enterprise. You can’t just order her to turn her research over to any unauthorized personnel, including yourself,” he said. “We’re not part of the Army. We just contract to the Pentagon…among others.”

“And you think you can keep the doors open developing a new and better toothpaste?” The career solider sneered. “Without defense department contracts, you’d be closed in a week. You know it and I know it. So, don’t delude yourself into thinking you have any real control here. The one holding the purse strings has the control…and that means me.”

Jack quietly swallowed the lump forming in his throat. He carefully contemplated his response, steeling himself before he answered, lacing the words with false bravado. “Of course military contracts are a sizable portion of our revenue, but don’t think that just because…”

Freemont waved his hand, cutting V
erde off in mid-sentence. “No. Don’t you think that I won’t pull every dime from this lab and watch it fold like a paper bag. Do you understand?” he pointed a thick finger at Verde. “I’m not asking for Ryan’s cooperation in this matter. I’m ordering it…and I expect you to make it happen.”

Jack felt the spike of adrenaline surge through his system at Freemont’s callous words.

The Colonel picked an imaginary piece of lint from his uniform’s lapel and continued. “I’m sure your competition would love a crack at…,” Freemont lifted his head, eyes boring into the man before him. “What was it, twenty million…in research dollars?”

Knowing the colonel might very well carry out his threat to close the lab, Jack felt his resolve weakening. He took another large swig of his drink, feeling the whiskey further irritate his already-churning stomach.

Freemont took a step back, retreating out of Jack’s “personal space”. The physical separation between the two men did nothing to alleviate escalating tension crackling in the air.

“We’ve had this discussion before, but I’ll say it again, since you’ve obviously forgotten. I provide the funding, and that means I control the resultant technology,” Freemont said. “My order shouldn’t come as a shock. You knew all along that any technology with military applications arising from this research would fall under my command. That caveat is in the contract and I’m exercising that prerogative now.”

Jack stalked around the room, straining his intellect, blindly searching for a way to deter Freemont. “You can’t be serious. I know you said that anything useful to the Army would be…but…Ryan herself said this project is nowhere near ready for field testing.”

“That’s for me to decide,” Freemont growled. “Your job is to see that this project is delivered to me…as instructed.”

Jack reached his desk and stopped, dropping heavily to his chair.

My God, he’s really going to close the lab if I don’t do what he says…or he could go after Jenny. I can’t let that happen.

Jack threw up his hands in a gesture of surrender. “Okay, I’ll do it.”

He removed a long cigar from the humidor on the left end of the desk and took his time clipping the end off before lighting it. He expelled a thick cloud of aromatic smoke, trying to get a grip on his growing apprehension before continuing. “I'll try to convince Jenny to turn over the project to me…then I give it to you. However, I don't think she’ll go for it. Anytime I mention naming someone to her project, even as a co‑director, she goes ballistic. If she gets one whiff of military involvement…”

Freemont leaned forward, both hands on the desk top. “So, are you telling me you can’t make it happen?” his words smacked of an accusation, the harsh tone an open insinuation of incompetence. “That would be very disappointing.”

“I didn’t say that,” Verde’s voice wavered, fear mixing with the uncertainty plaguing his chaotic thoughts. “It just may take some time. She’s very…proprietary.”

Freemont again stood upright. “You’ve had plenty of time…months in fact…to soft-peddle the idea to Ryan. Now, get it done!”

Jack puffed several times on the cigar in silence before nodding his head. “Fine. I’ll talk to her today.”

“Good. Now that we understand each other, you tell Dr. Ryan to get on board. No ands, ifs or buts. Otherwise, I have no choice but make her life, and yours, dammed uncomfortable.”

He turned his back on Verde, again facing the window. “Am I making myself clear?”

Hearing no response, Freemont strode across the room, stopping at the door. “Good. I knew you weren’t a complete idiot.”

With the insult still hanging heavy in the air, Freemont made his exit, leaving the door open as a last sign of self-importance and contempt.

Jack downed the rest of his drink. The threat ringing in his ears, he faced the empty office feeling he’d just sold Freemont the key to Pandora’s box. He poured himself another measure of whiskey before returning to his desk.

I have to figure out a way to make this work. Jenny’s just going to have to understand. It’s for her own good.

A detestable sense of self-loathing swelled in his mind. Freemont’s right. Like it or not, he’s calling the shots.

Jack contemplated the inescapable truth of what he must do next. He took another sip of the fine liquor, his thoughts becoming dark and morose as he waited for the whiskey to deaden his senses

Hand on the desk phone, his stomach did another anxious cartwheel as he considered what he would say. He searched his unsettled thoughts for some plausible justification to get his preeminent scientist to release her project…for reasons he couldn’t reveal…or justify. He punched the buttons and heard the sound of the ringing line.