“Could they be moving them out of the Society?” Ky asks.

I shake my head, confused. Why would they do that? “They’re arranged by Province,” I say, noting that all the tubes in the case before me say KA.

“It should be on the next row,” I say, calculating, walking fast.

Indie and Hunter stand together watching us. I turn the corner and find tubes marked OR for Oria. Seeing the familiar abbreviation in such a strange place gives me an odd feeling that is both intimate and distant.

I hear a sound at the secret entrance to the Cavern. We all turn. Eli comes through just like Ky did, grinning and brushing dirt from his hair. I rush over to him and grab Eli tight, my heart hammering in my chest at what he went through all alone.

“I’m fine,” he tells me. He glances over my shoulder, looking for Ky.

“You did it,” Ky calls out to Eli, and Eli seems to stand a little straighter. I shake my head at Eli. Promising one thing, then choosing his own way when he changed his mind. Bram would have done the same thing.

“We think they’re organized by Province,” I tell him, and then I see Ky signaling to me.

“Cassia. I found something. ”

I hurry back over to where Ky is while Indie and Eli wander up and down other rows, looking for their own Provinces. “If the first date is the birthdate,” Ky says, “then the second date is likely . . . ” He pauses, waiting to see if I draw the same conclusion.

“The death date. The date the sample was taken,” I say. And then I realize what he means. “They’re too close. They’re not eighty years apart. ”

“They weren’t just storing the old,” Ky says. “These people—they can’t all be dead. ”

“They don’t only take the samples when we die,” I say, my mind racing. I think back—so many chances. Our forks. Our spoons. The clothes we wear. Or maybe we even give the samples ourselves, nod and scrape our own tissue away, hand it over and then take a red tablet. “The sample at the end means nothing. The Society already has tubes for everyone they want to keep. Maybe younger tissue works better. And this way, if we don’t know about the other samples, they can keep us compliant until the very end. ” My heart leaps within me, perversely, in gratitude to the Society.

Grandfather might have a sample in here. It might not matter that my father destroyed the one taken at the Final Banquet.

“Here,” Ky says quietly, pointing to one of the blue-lit tubes.

Of course. I avoid Ky’s eyes and look at the tube. CARROW, XANDER. OR. His birthdate is correct. This is Xander’s sample; but Xander is not dead.

As far as I know.

And then Ky and I both stand by the case, our eyes running over the numbers, our fingers interlocking. Who is here? Who is saved?

“You’re here,” Ky says, pointing. There it is, the date of my birth. And my name: REYES, CASSIA. I draw my breath in sharply. My name. Seeing it here reminds me of the way it felt when they said my name at the Match Banquet. It reminds me that I belong. That my future has been secured by the Society with great care.

“You might be in another Province,” I say. “You could be—”

“I’m not here,” Ky says. And for a moment, in the dim lighting of the cave, with the way he knows how to blend with the shadows, it seems that he is not. Only the feel of his hand holding tightly to mine tells me differently.

Hunter comes over to stand next to me and I try to explain. “They’re tissues,” I tell Hunter, “a little bit of skin or hair or fingernail. The Society takes them from its Citizens so that, someday, the Society can bring us back to life. ” I wince at my use of the word us—for all I know, I might be the only one in this cave with a tube stored here. And even that might only be because they haven’t had time to change my status yet. I glance up at the walls of the cave again, at the bones and teeth and shells left behind. If what we are isn’t in our bones, it must be in our tissues. It must be somewhere.

Hunter looks at me and then at the tubes. He looks for so long that I open my mouth to try to explain again, but then he reaches inside a case and takes out a tube before I can stop him.

Its absence unnerves me. Does a light flash somewhere back in the Society to tell an Official of the breach?

Hunter holds the tube up and shines a flashlight through it. The samples are so small they can’t even be seen amid the solution swishing inside.

Snap. The tube breaks and blood runs red down Hunter’s hand. “They killed us to store themselves,” he says.

Everyone looks at Hunter. For a wild, impulsive moment, I am tempted to join Hunter in breaking—I’d open all the doors to all the cases and grab something, a stick perhaps. I’d sprint down aisles of tubes shining blue, silvery, light. I’d run the stick along them to see if they would sound like chimes. I wonder if the tune of other lives would be sour, wrong; or strong, clear, soft, and truly musical. But I don’t break. I do something else instead, quickly, while they all stare at Hunter.

He opens his hand, looks at the blood and liquid in his palm. In spite of myself, I note the name on the label: THURSTON, MORGAN. I look back up at Hunter. Breaking a tube like that must require a lot of strength, but he seems not to notice the effort. “Why?” he asks. “How? Have they discovered a way to bring people back?”

Everyone stares, waiting for me to explain all of this. Anger and embarrassment rise up within me. Why do they think I have the answers? Because I’m the most Society of us all?

But there are things I do not understand, parts of the Society, parts of myself.

Ky puts his hand on my arm. “Cassia,” he says softly.

“I’m not Xander!” I say, too loud in the echoing cave. Ky blinks as the sound of my voice calls all around him. “I don’t know about medicine. Or tablets. Or sample storage. Or what the Society can or can’t do in the medical field. I don’t know. ”

For a moment, everyone is silent. Then Indie speaks. “Xander’s secret,” she says, turning to Ky. “Does it have anything to do with this?”

Ky opens his mouth to say something, but before he can, we all see it—a little red light flashing now on the top of the case Hunter opened.

Fear sings through me again, and I don’t know which frightens me more—the Society, or the Cavern that has us caught.

Hunter reaches for another tube and snaps that one in his hand too.

Indie doesn’t hesitate. She turns and runs for the entrance to the cave and slides into the rocks.

“We can’t leave him here,” Cassia says, looking at Hunter, who sees nothing and hears nothing but the tubes he breaks in his hands.

“We need him for the climb,” she says.

“We’ll wait at the crossing,” Cassia promises. “The Society might take a long time to get here. ”

Unless they’re in the area already, I think. Then it could be a matter of minutes.

He shakes his head and breaks another tube.

“We could try to catch up with the farmers who went across the plain,” I say.

“They could all be dead by now,” he says.

I don’t try to stop him. One tube, a thousand—what’s the difference? The Society will know of this either way. And part of me wants to join him. When you’ve lost everything, why not take what you can before they come down on you? I remember that feeling. Another, darker part of me thinks, And if he doesn’t come with us, then he can’t tell Cassia about the Rising and how to find them. I’m sure he knows.

I go back to the entrance of the crevice and find a stone. I carry it back over to him. “Try this,” I say. “It will go faster. ”

Hunter doesn’t say anything but he takes the rock from me and holds it over his head. Then he brings the stone down fast over a row of tubes. I hear them break as I slide into the crevice to get out.

Once I’m outside I listen for the sound of the air ships above us.

They waited for me. “You should have gone on ahead,” I say to Cassia, but that’s all I have time to say before we’re all clipped in and climbing. Up. Across. For a moment on the top on that bare plain of rock I wonder if I should run behind or ahead—which is the best way to protect her—and then I find us just running side by side.

“Are they going to find us?” Eli gasps once we reach the other canyon.

We all look up. The sky above us is a delicate early-winter blue. Gray clouds hang in the distance but they are miles away.

Cassia hasn’t forgotten what Indie said in the cave. She comes up next to me and puts her hand on my arm. “What did Indie mean?” she asks, out of breath. “About Xander’s secret?”

“I don’t know what she’s talking about,” I lie.

I don’t look back at Indie. Her boots sound on the rocks behind us but she doesn’t contradict me and I know why.

Indie wants to find the Rising and for some reason she thinks I’m the most likely to know how to get there. She’s decided to cast her lot with mine even though she doesn’t like me any more than I like her.

I reach for Cassia’s hand and listen for the beats of the Society’s ships above us, but for now they do not come.

Neither does the rain.

When Xander and I took the red tablets that day long ago, we counted to three and swallowed them at the same time. I watched his face. I couldn’t wait for him to forget.

It didn’t take long to realize that it didn’t work and that he was immune, too. Until then I’d thought I was the only one.

Cassia told me what happened that day in the Borough after I left—how she learned that Xander was immune to the red tablets. But she doesn’t know his other secret. And I’m keeping that one because it’s the fair thing to do, I tell myself. Because it’s his right to tell her. Not mine.

Crossed by Ally Condie / Young Adult / Science Fiction have rating 4.3 out of 5 / Based on34 votes 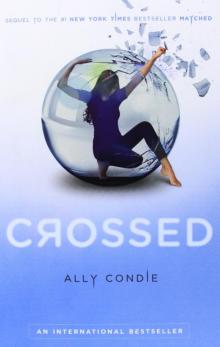