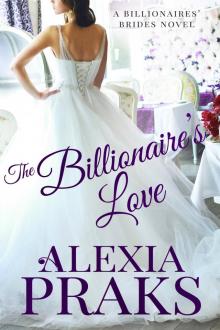 This is a work of fiction. Names, characters, places, and incidents either are the product of the author’s imagination or are used fictitiously, and any resemblance to actual persons, living or dead, business establishments, events, or locales is entirely coincidental.

No part of this book may be reproduced, scanned, or distributed in any printed or electronic form without agreement and written permission of the author. Please do not participate in or encourage piracy of copyrighted materials in violation of the author’s rights. Purchase only authorized editions.

The author can be reached at: www.alexiapraks.com

About The Billionaire’s Love

About The Billionaire’s Love

After the death of her beloved grandmother, Chandra Chandler, known affectionately as Chan, and her two sisters move to Australia to escape their tormented past and build a better life. When a fortune-teller reveals to Chan she will fall in love with a man who is as bright as the sun, she dismisses the very idea as nothing more than hocus pocus. Love, she knows, is beyond her reach. But when the drop-dead gorgeous Sam Harrington and his cute daughter waltz into her life, Chan’s world turns upside down.

Sam draws her to him like a moth to a flame with his good looks, charismatic personality, and kindness. Most of all, his warm gaze and gentle touches tempt her with the promise of hot seduction—a dangerous territory she is very afraid to enter, yet longs to experience. And what about the handsome Jeremy who is courting her? The man who, according to her fortune reading, is destined to be her soul mate? Is her attraction to Sam nothing more than a short, intense blaze? Or is it something more?

After the death of his wife in a freak accident, multibillionaire Sam Harrington is sick of women throwing themselves at his feet simply because they are attracted to his enormous bank account and good looks. When he accidentally bumps into a woman named Chan, he instantly knows she is different. He finds he is powerfully attracted to her, and to his surprise, overwhelmingly wants her. Then he realizes Chan is dating his cousin Jeremy, but he relentlessly courts her none the less, if only to get to know her better and be with her for a stolen moment. When he discovers this strong, beautiful woman is broken inside and in danger of losing herself, he vows to protect and love her unconditionally.

Chan must make the ultimate choice, Sam or Jeremy?

The delicate china felt warm in her palms. Tea. She was being served green tea. In this very hot weather? It was so like Grandma Su to serve her guests hot drinks, no matter the weather.

Chandra Chandler stared long and hard at the light steam rising from the cup toward her face, fascinated by it. It wasn’t long, though, before she lost herself in her own thoughts again. Instantly, she felt that dull pain piercing deep within her heart and the absence and loneliness after losing her beloved Grandma Lin.

It will get better, she reminded herself. It will.

Chandra jolted back to reality when she heard the soft, gentle voice calling her the name Grandma Lin had given her. Chan, pronounced Chun, which was a shorten version of Chandra, pronounced Chun-druh, Grandma Lin had told her when she’d been a child meant “the moon” in Cambodian. The old woman said it was perfect for her, as she’d been born during the full moon at midnight.

“I’m sorry?” she queried the elderly woman sitting across from her.

Grandma Su glanced up, her dark eyes—full of wisdom and enlightenment—boring deep into Chan’s own light-brown ones.

“You’ve just lost another loved one,” she said. There was a hint of Khmer accent within her speech that Chan didn’t miss.

Chan gave Grandma Su a slight smile, her hands gripping tightly to the cup of tea. Yes, she’d just lost another loved one. It was her grandmother from her mother’s side of the family, who she fondly called Grandma Lin. The kind, gentle ninety-year-old woman had passed on only three months prior from old age.

There were only the three of them now: Chan and her two younger sisters, Dara and Soriya, who happened to be named according to the time of their births as well. The second sister Dara’s name meant the star, because she’d been born in the early dawn when the star of Venus was shining bright amongst the dark sky. The youngest sister Soriya’s meant the sun, because she’d been born during midafternoon when the sun had been at its warmest and most brilliant.

To be frank, the girls had been orphaned since both their parents had died many years before Grandma Lin. Their mom passed away from cancer when Chan was eleven and dad from a bunch of teenage drunk drivers when she was seventeen.

“I’m so sorry to have turned up without informing you first, Grandma Su,” Chan said politely to the old lady who was her grandmother’s best friend. “She asked me to come and see you. She was quite persistent.” She chuckled a little at the reminder of Grandma Lin’s stubbornness. She took another sip of the green tea. The warm, mild liquid soothed her, and she sighed pleasantly.

“It must be very hard for you and your sisters,” Grandma Su said. “Lin was my best friend. And now she has left me.” She sighed. “But for you, my dear, it is best you move on.” She placed her hand gently on top of Chan’s, a gesture of comfort.

“It’s hard,” Chan said, bowing her head. “But I am determined to move on.”

“Lin would be proud of you,” Grandma Su said. Then she placed her fingers under Chan’s chin, which surprised her, and urged the young woman’s face up slightly so she could look at her properly.

Chan blinked, wondering why Grandma Su was examining her face so intensely. The old woman was staring at her smooth, round forehead, slanted eyes, straight nose, plump lips, and chin.

“A beautiful face,” she said. “You’ve bloomed very late, Chan. Many bloomed at eighteen. You bloomed at twenty-five.”

Chan had to chuckle at Grandma Su’s remark, since she had no idea what the woman was talking about. She knew for certain she didn’t have a beautiful face, nor had she ever bloomed. She didn’t think she would ever bloom at all if she were a flower. And of course, she wasn’t yet twenty-five, not until next month.

“A mix of yellow and white,” Grandma
Su said. “A lovely cherry blossom.”

At this point, Chan couldn’t really help herself and had to ask, “What are you talking about?”

Chan chuckled. “Thanks, I think,” she said. She didn’t think her nose was ever beautiful.

“You’re entering a new phase in your life,” Grandma Su said with a note of concern. “It seems there will be challenges.”

“Lin was concerned,” Grandma Su said. “She asked me to read your fortune two years ago. That is why she insisted you come to see me.”

“Like I said, dear, she was concerned about you.”

“Of course, I cannot tell you who he is, but I can tell you he is out there, very bright, just like the sun. Yes, he is like the sun, a warm person who many adore and depend on.”

Grandma Su turned her eyes to Chan again and cocked her head to one side, just like a small bird would, scrutinizing the young woman. “Ah, you will be a tiny thing standing next to him. He is a big man, Chan, this sun man of yours.”

Chan blinked. “I’m not exactly sure I understand what you’re talking about." Though she said that, she had the distinct feeling Grandma Su was talking about her possible future soul mate.

Grandma Su laughed. "Ah, I see I have captured your interest. Do you want to know about your love life, Chan?"

Chan frowned. No. Not really. She glanced down, blushing a little.

Grandma Su must have noticed the blush. She chuckled and patted Chan’s hand.

“Like I said, I cannot tell you who he is, for I do not know myself. Of course, you will understand, dear, once you’ve met him. And very soon, too. Now then, come along. I will show you my vegetable garden.” She dismissed the subject with a wave of her hand and headed out the door.

Chan got up and followed the elderly woman, her thoughts still on the challenges ahead of her Grandma Sue had mentioned. And of course, this future soul mate of hers. But then, she’d already made up her mind to never marry or enter a relationship. It was just too toxic. Relationships were toxic. Love was toxic. And sex? Yes, that was toxic, too. The worst, come to think of it, and instantly, she felt her stomach knot with dread, that fear she’d always felt.

She felt herself shaking uncontrollably. He’s not here, she told herself. You’re as far away from him as you can possibly be.

She calmed down and stepped into the beautiful sunshine outside.

“It’s good that you take time for yourself,” the woman said, nodding her head. “It will be a life-changing move. I assure you.”

Grandma Su must have been referring to Chan and her sisters moving to Australia. After all, there was nothing left for them in New Zealand now since their grandmother had died. Well, there were still Amie, their dad’s second wife, their stepmother, and of course, Lisa, their stepsister. Perhaps, Chan thought, she should stop thinking of Amie as a stepmother. After all, their dad had already passed away years ago. Right now, she didn’t want to think about Amie and Lisa at all.

Then of course, there was Dave, Lisa’s husband, the one Chan feared and hated most. The one who had whispered empty words of love to her, lies, words that made her feel sick.

She felt dizzy again thinking about him. She reminded herself, You are far, far away from him now. He won’t hurt you anymore. He can’t.

She said, “I know, Grandma Su. I’ve known for a long time now that it was time to get out.”

Grandma Su turned to look at Chan then, as if she understood the meaning of Chan’s words. In a way, Chan knew the woman knew because she was so wise, just like Grandma Lin, who’d known for a long time the torment of her granddaughter’s secret. She’d done her best to help her keep the people responsible at bay, and of course, to bring her out from her lonely darkness.

Chan stayed with Grandma Su for another hour, enjoying the sound of the woman’s light chatter as she was led about the large garden. Once Grandma Su had given her some of her precious vegetables, mainly water spinach, cucumbers, and peppers, Chan kissed her good-bye.

On her way home on the bus, her mind was on Grandma Su’s words. She didn’t really believe in things like fortune telling. More importantly, she didn’t believe she had a soul mate. But then, why did she have the sudden feeling it was time? That she was ready? For what? She didn’t know and flicked her mind away from that subject as she watched the scenery pass her by.