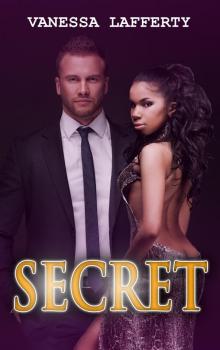 All rights reserved. No part of this book may be reproduced or transmitted in any form or by any means, electronic or mechanical, including emailing, photocopying, recording or by any information storage and retrieval system, without permission in writing from the author.

This is a work of fiction. Any resemblance to actual events or locals or persons, living or dead is entirely coincidental.

Before I’ve finished this glass of champagne, I’m going to kill a man. But not just any man. No, before this party’s over, its billionaire host will have left this world.

The last time I harbored murderous thoughts was in college, when I stupidly used my boyfriend’s private email and found the library of sexting pictures he’d saved from his online harem. An AK-47 came to mind then, or a bazooka. Something to paint the walls of his dorm room with his cheating guts.

But tonight isn’t a revenge fantasy. It’s deadly real, a nightmare rendezvous, and it’s about to burst to life. Athena’s my name. Murder’s so not my game...except this one time, tonight.

Tonight I’m going to kill the man responsible for my father’s death. His name is Manuel Raul Valdez, and he ordered the hit. I remember meeting him a few times when I was little, always on family occasions. You see, he and Papa were business rivals, and as a mark of respect they would invite each other to the occasional milestone celebration or private function. Keep your enemies closer and all that. They never liked each other personally, but there was always respect. Valdez once brought me an awesome little toy doctor’s set, with a stethoscope, a fake syringe, a prescription notepad, a thermometer, and other cool stuff. It made my birthday. What I didn’t know was Valdez had done it to prove how good his spies were: if he could find out what his rival’s daughter wanted more than anything for her birthday, what else could he find out? About Papa’s business, for instance...

Well, I never did become a doctor, or anything else, really. I’m twenty-three, single, part way through a night-class degree in Business Management, and on the (long uphill) slimming slope—at least I’m no longer obese. But tonight I have a prescription I could never have scribbled on that child’s notepad and a way of administering the treatment that definitely authentic. In the slightly chubby forefinger of my right hand is a ring. On the end of this ring is a tiny needle with a cap. All I have to do is prick Valdez with this needle, pierce the skin anywhere on his body, and he will die within twelve hours.

How’s that for a return present, Manuel, you, son of a bitch?

I sip champagne and pretend to mingle with over a hundred rich people I don’t know and don’t want to know. Smiles, nods, micro-talk (that’s small-talk with even less of a point), indulging the hungry gazes of old letches: it’s all camouflage in the driest, stuffiest jungle I’ve ever been in. But I’m the predator tonight. A five-foot tall, C-cup predator with blue eye shadow and copious eyeliner, and a sequined sapphire dress to die for.

Valdez’s hacienda is on the southeast coast of Malta. It’s blistering hot here during the day, but evening brings a cool, succulent breeze that circulates the second floor drawing room, sweetening the air with the scents of sub-tropical trees and flowers from his massive coastal garden.

It’s tough to get near Valdez, never mind catch him on his own. At least one bodyguard stands beside him at all times, sometimes two. A gaggle of guests hovers, clucks nearby wherever he goes. I’ll have to slip in between them and brush past him, prick him on the hand, hope he doesn’t notice me. Being in a crowd might help there. On the other hand, I didn’t exactly go for inconspicuous with this dress...

“Evelyn, right?” an enthusiastic British baritone voice accosts me from behind.

I swivel into an unconscious reply, my tongue still tied to thoughts of murder. It comes out as “Ex...Cugeous?” which would probably translate as “Excuse me? Wow, you’re gorgeous,” if this had been any other time and place. I melt. Mentally scramble to find a polite brush-off, draw a blank instead.

“I see. Don’t speak English, eh, Evelyn?” He raises his glass to me. I can’t decide if he’s making fun or not, so I convince myself he is. Right now, any way out of this is a good way out.

“There’s nothing wrong with my English, thank you,” I reply. “Only with your hearing... I said ‘Not right now’.”

He quirks an eyebrow, loosens his already loose collar—the top button’s open, and his bowtie’s hanging down the lapel of his tux. His striking blue-gray eyes are swimming a little, and from the way he sways on his heels, I’d say there’s a naught percent chance he’s still sober. “Not right now? An intriguing response,” he slurs. “I’m prepared to wait...as long as it takes.”

He opens his mouth to reply, stops, holds a finger up instead, as if that will help him divine a better chat-up line. It doesn’t. Poor guy can’t remember what day of week it is.

“If you’ll excuse me...” I say. When he stares blankly at me, I remind him, “You can go away now. Go over there. The girl with the backless dress, she said she’s been waiting for you to talk to her.”

He looks over at her, and then grabs me by the arm. “No, it has to be you. I love the whole Persian princess thing, and you’re so rocking that dress.”

“I’m Greek-African, and you need to get off me right now.”

“Sorry. I really am. It’s just that...I need to get naked with you, Evelyn. Tonight... And there are things I can do—”

With a jolt of disgust I pull away—“Don’t come near me again, you sleazy shit”—leaving him to down the remainder of his bubbly and stumble on to his next poor victim.

By this time, Valdez is on the move. This way, in fact...

I took a deep breath, slip the cap off the needle, and try to compose myself on the move, aiming my walk so that it crosses his path with nonchalant timing, just close enough to...

The obnoxious Brit cuts in front of me, feels me up on the way past. Before I can react, he’s all over Valdez, shaking his hand, patting him on the shoulder, whispering something in his ear, which elicits the biggest roar of laughter of the evening from the man I’m here to kill.

I hang back, cool off. This isn’t going to work. Maybe it never will. I’m no assassin—I’m plain old Athena Katsaros, and I don’t even eat meat. But right now the hate I feel for Valdez is only marginally stronger than the hate I feel for that insufferable British tuff that’s ruined everything. Maybe I should just stick him instead, see how much he slurs then.

No, there’s still time. I can still do this. Perhaps when the guests start to thin and the evening’s winding down, I can make my move. So for now, I’ll slip the cap back onto the needle and hang fast.

“That’s either the craftiest hard-to-get routine I’ve ever seen, or you’ve no idea who you’ve just turned down.” A leggy, middle-aged redhead in a sleeveless number slinks beside me, her lascivious gaze fixed on the Brit tragedy who’s been busy regaling Valdez for the past ten minutes, non-stop. Everyone seems to think he’s a cut-up. And the women are practically clawing each other to get next to him.

“I don’t want to know who he is,” I lie. The idea that he’d fend off all these dazzling women and single me out, hit on
me is...distracting.

“’S okay, honey’. He comes on strong. If I’d only just met him, I’d be intimidated too. But trust me, there’s only one Barrett Carlisle. You won’t want to turn him down a second time. It's just a friendly piece of advice.”

“Thanks, but no thanks. I’m not that desperate.”

“Uh-huh. Well, he’s all yours, babe.” I blow a bit of venom into that last word, hoping she gets the message.

She snorts a gentle mocking laugh, holds up her glass to me, and then slinks away. Her pale, bony shoulders are so sharp they could literally cut their way through a crowd. Adios, bitch.

It isn’t long before I’m dying to pee. The nearest restroom, I’m told, is across the balcony outside, so I make it there and back as quick as my high heels will carry me. When I return, Carlisle has chosen his victim, sorry, date for the evening, a Latino waif who can’t be more than nineteen. He says goodbye to his host in typical grandiose fashion—a playful headlock is involved—then gives the girl a running piggyback on his way out.

With him out of the picture, my chance to strike is near, I can sense it.

Less than fifteen minutes later, that chance arrives. Valdez excuses himself from the group he’s with—including his