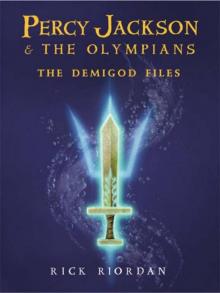 Okay, it’s not every day that you’ll find yourself battling a doughnut-eating monster but, for the sake of argument, let’s say you did. These are the guys you’d want around as your back-up team.

(NB I only added Clarisse ’cause she’s got me out of a few scraps. Really, I hate her. )

About Chiron: Chiron’s dad is none other than the scariest Titan of them all, Kronos. The same Titan who wants to kill ME!

Body type: When he’s in his wheelchair you wouldn’t know that he’s a centaur. From the waist up he looks like a regular middle-aged guy: curly brown hair, check. Scraggly beard, check. But from the waist down he’s a white stallion!

Age: 13 and a half (and apparently way more mature than me)

Quote: Always, always have a plan.

About Annabeth: She’s had a kinda tough life. She ran away from home when she was seven because her dad got remarried and then she hung around with Luke and Thalia for a while before coming to camp.

Status: Why does everybody think Annabeth and I are a couple? She’s just my friend, seriously!

Name: GROVER UNDERWOOD AKA THE G-MAN

Quote: Give a hoot, don’t pollute!

Best feature: You’ll never have a problem with recycling when the G-man is around. He’ll eat all your aluminium cans!

Body type: Barnyard. He has shaggy legs and hooves. His top half is… um, very buff. Yes, very…

About the G-man: He’s a satyr: half man, half goat. He finally got his searcher’s licence to find the missing god Pan, but he keeps getting interrupted! Oh well, at least the Cyclopes didn’t eat him.

Location: Poseidon’s palace, somewhere at the bottom of the sea

Body type: Huge, bulky and yeah, oh right, he only has one eye.

About Tyson: He’s had it kinda rough too. As the child of a nature spirit and a god (okay, my dad, Poseidon), he was cast out and tossed aside. Tyson had to grow up on the streets, until I found him, that is.

Age: I’m too scared to ask.

Quote: Hey, Prissy (aka Percy), get ready to be pulverized!

About Clarisse: I’m gonna give you a massive heads-up here. All you need to know about Clarisse is that her father is Ares. Who’s he? Only the GOD OF WAR!

PERCY JACKSON AND THE STOLEN CHARIOT

I was in fifth-period science class when I heard these noises outside.

Like somebody was getting attacked by possessed poultry, and, believe me, that’s a situation I’ve been in before. Nobody else seemed to notice the commotion. We were in the lab, so everybody was talking, and it wasn’t hard for me to go look out the window while I pretended to wash out my beaker.

Sure enough, there was a girl in the alley with her sword drawn. She was tall and muscular like a basketball player, with stringy brown hair and jeans, combat boots and a denim jacket. She was hacking at a flock of black birds the size of ravens. Feathers stuck out of her clothes in several places. A cut was bleeding over her left eye. As I watched, one of the birds shot a feather like an arrow, and it lodged in her shoulder. She cursed and sliced at the bird, but it flew away.

Unfortunately, I recognized the girl. It was Clarisse, my old enemy from demigod camp. Clarisse usually lived at Camp Half-Blood year-round. I had no idea what she was doing on the Upper East Side in the middle of a school day, but she was obviously in trouble. She wouldn’t last much longer.

I did the only the thing I could.

I ran out the door, stripping off my safety goggles, gloves and lab apron. I got out my weapon – a ballpoint pen called Riptide.

Nobody stopped me in the halls. I exited by the gym. I got to the alley just in time to see Clarisse smack a devil bird with the flat of her sword like she was hitting a home run. The bird squawked and spiralled away, slamming against the brick wall and sliding into a trashcan. That still left a dozen more swarming around her.

She glared at me in disbelief. ‘Percy? What are you doing –’

She was cut short by a volley of feather arrows that zipped over her head and impaled themselves in the wall.

‘Just my luck,’ Clarisse grumbled, but she was too busy fighting to complain much.

I uncapped my pen, which grew into a metre-long bronze sword, and joined the battle, slashing at the birds and deflecting their feathers off my blade. Together, Clarisse and I sliced and hacked until all the birds were reduced to piles of feathers on the ground.

We were both breathing hard. I had a few scratches, but nothing major. I pulled a feather arrow out of my arm. It hadn’t gone in very deep. As long as it wasn’t tipped with poison, I’d be okay. I took a bag of ambrosia out of my jacket, where I always kept it for emergencies, broke a piece in half and offered some to Clarisse.

‘I don’t need your help,’ she muttered, but she took the ambrosia.

We swallowed a few bites – not too much, since the food of the gods can burn you to ashes if you overindulge. I guess that’s why you don’t see many fat gods. Anyway, in a few seconds our cuts and bruises had disappeared.

Clarisse sheathed her sword and brushed off her denim jacket. ‘Well… see you. ’

‘What’s going on? What are you doing away from camp? Why were those birds after you?’

Clarisse pushed me, or tried to. I was too accustomed to her tricks. I just sidestepped and let her stumble past me.

‘Come on,’ I said. ‘You just about got killed at my school. That makes it my business. ’

She took a shaky breath. I got the feeling she really wanted to punch me out, but at the same time there was a desperate look in her eyes, like she was in serious trouble.

‘Oh,’ I said, not really surprised. Clarisse had lots of siblings at Camp Half-Blood. All of them picked on each other. I guess that was to be expected since they were sons and daughters of the war god, Ares. ‘Which brothers? Sherman? Mark?’

‘No,’ she said, sounding more afraid than I’d ever heard her. ‘My immortal brothers. Phobos and Deimos. ’

We sat on a bench at the park while Clarisse told me the story. I wasn’t t
oo worried about getting back to school. Mrs White would just assume the nurse had sent me home, and sixth period was woodwork class. Mr Bell never took attendance.

‘So let me get this straight,’ I said. ‘You took your dad’s car for a joyride and now it’s missing. ’

‘Your brothers carjacked you. ’

‘Chariot-jacked me,’ she corrected. ‘They’re his regular charioteers, see. And they don’t like anybody else getting to drive. So they stole the chariot from me and chased me off with those stupid arrow-throwing birds. ’

She nodded miserably. ‘They guard his temple. Anyway, if I don’t find the chariot…’

She looked like she was about to lose it. I didn’t blame her. I’d seen her dad, Ares, get mad before, and it was not a pretty sight. If Clarisse failed him, he would come down hard on her. Real hard.

She scowled. ‘Why would you? I’m not your friend. ’

I couldn’t argue with that. Clarisse had been mean to me a million times, but still, I didn’t like the idea of her or anybody else getting beaten up by Ares. I was trying to figure out how to explain that to her when a guy’s voice said, ‘Aw, look. I think she’s been crying!’

A teenage dude was leaning against a telephone pole. He was dressed in ratty jeans, a black T-shirt and a leather jacket, with a bandanna over his hair. A knife was stuck in his belt. He had eyes the colour of flames.

‘Phobos. ’ Clarisse balled her fists. ‘Where’s the chariot, you jerk?’

Clarisse drew her sword and charged, but Phobos disappeared as she swung, and her blade bit into the telephone pole.

Phobos appeared on the bench next to me. He was laughing, but he stopped when I stuck Riptide’s point against his throat.

‘You’d better return that chariot,’ I told him, ‘before I get mad. ’

He sneered and tried to look tough, or as tough as you can with a sword under your chin. ‘Who’s your little boyfriend, Clarisse? You have to get help fighting your battles now?’

‘He’s not my boyfriend!’ Clarisse tugged her sword, pulling it out of the telephone pole. ‘He’s not even my friend. That’s Percy Jackson. ’

Something changed in Phobos’s expression. He looked surprised, maybe even nervous. ‘The son of Poseidon? The one who made Dad angry? Oh, this is too good, Clarisse. You’re hanging out with a sworn enemy?’

‘I’m not hanging out with him!’

Clarisse screamed. She swatted the air as if she were being attacked by invisible bugs. ‘Please, no!’

‘What are you doing to her?’ I demanded.

Clarisse backed up into the street, swinging her sword wildly.

‘Stop it!’ I told Phobos. I dug my sword a little deeper against his throat, but he simply vanished, reappearing back at the telephone pole.

‘Don’t get so excited, Jackson,’ Phobos said. ‘I’m just showing her what she fears. ’

The glow faded from his eyes.

Clarisse collapsed, breathing hard. ‘You creep,’ she gasped. ‘I’ll… I’ll get you. ’

Phobos turned towards me. ‘How about you, Percy Jackson? What do you fear? I’ll find out, you know. I always do. ’

The Demigod Files by Rick Riordan / Fantasy / Young Adult have rating 4.3 out of 5 / Based on43 votes