Home » Rick Riordan » The Mark of Athena
←Home
The mark of athena, p.1 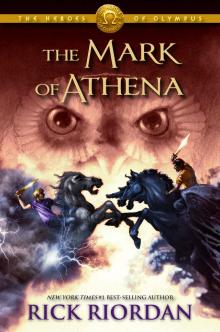 Until she met the exploding statue, Annabeth thought she was prepared for anything.

She’d paced the deck of their flying warship, the Argo II, checking and double-checking the ballistae to make sure they were locked down. She confirmed that the white “We come in peace” flag was flying from the mast. She reviewed the plan with the rest of the crew—and the backup plan, and the backup plan for the backup plan.

Most important, she pulled aside their war-crazed chaperone, Coach Gleeson Hedge, and encouraged him to take the morning off in his cabin and watch reruns of mixed martial arts championships. The last thing they needed as they flew a magical Greek trireme into a potentially hostile Roman camp was a middle-aged satyr in gym clothes waving a club and yelling “Die!”

Everything seemed to be in order. Even that mysterious chill she’d been feeling since the ship launched had dissipated, at least for now.

The warship descended through the clouds, but Annabeth couldn’t stop second-guessing herself. What if this was a bad idea? What if the Romans panicked and attacked them on sight?

The Argo II definitely did not look friendly. Two hundred feet long, with a bronze-plated hull, mounted repeating crossbows fore and aft, a flaming metal dragon for a figurehead, and two rotating ballistae amidships that could fire explosive bolts powerful enough to blast through concrete…well, it wasn’t the most appropriate ride for a meet-and-greet with the neighbors.

Annabeth had tried to give the Romans a heads-up. She’d asked Leo to send one of his special inventions—a holographic scroll—to alert their friends inside the camp. Hopefully the message had gotten through. Leo had wanted to paint a giant message on the bottom of the hull—WASSUP? with a smiley face—but Annabeth vetoed the idea. She wasn’t sure the Romans had a sense of humor.

Too late to turn back now.

The clouds broke around their hull, revealing the gold-and-green carpet of the Oakland Hills below them. Annabeth gripped one of the bronze shields that lined the starboard rail.

Her three crewmates took their places.

On the stern quarterdeck, Leo rushed around like a madman, checking his gauges and wrestling levers. Most helmsmen would’ve been satisfied with a pilot’s wheel or a tiller. Leo had also installed a keyboard, monitor, aviation controls from a Learjet, a dubstep soundboard, and motion-control sensors from a Nintendo Wii. He could turn the ship by pulling on the throttle, fire weapons by sampling an album, or raise sails by shaking his Wii controllers really fast. Even by demigod standards, Leo was seriously ADHD.

Piper paced back and forth between the mainmast and the ballistae, practicing her lines.

“Lower your weapons,” she murmured. “We just want to talk. ”

Her charmspeak was so powerful, the words flowed over Annabeth, filling her with the desire to drop her dagger and have a nice long chat.

For a child of Aphrodite, Piper tried hard to play down her beauty. Today she was dressed in tattered jeans, worn-out sneakers, and a white tank top with pink Hello Kitty designs. (Maybe as a joke, though Annabeth could never be sure with Piper. ) Her choppy brown hair was braided down the right side with an eagle’s feather.

Then there was Piper’s boyfriend—Jason. He stood at the bow on the raised crossbow platform, where the Romans could easily spot him. His knuckles were white on the hilt of his golden sword. Otherwise he looked calm for a guy who was making himself a target. Over his jeans and orange Camp Half-Blood T-shirt, he’d donned a toga and a purple cloak—symbols of his old rank as praetor. With his wind-ruffled blond hair and his icy blue eyes, he looked ruggedly handsome and in control—just like a son of Jupiter should. He’d grown up at Camp Jupiter, so hopefully his familiar face would make the Romans hesitant to blow the ship out of the sky.

Annabeth tried to hide it, but she still didn’t completely trust the guy. He acted too perfect—always following the rules, always doing the honorable thing. He even looked too perfect. In the back of her mind, she had a nagging thought: What if this is a trick and he betrays us? What if we sail into Camp Jupiter, and he says, Hey, Romans! Check out these prisoners and this cool ship I brought you!

Annabeth doubted that would happen. Still, she couldn’t look at him without getting a bitter taste in her mouth. He’d been part of Hera’s forced “exchange program” to introduce the two camps. Her Most Annoying Majesty, Queen of Olympus, had convinced the other gods that their two sets of children—Roman and Greek—had to combine forces to save the world from the evil goddess Gaea, who was awakening from the earth, and her horrible children the giants.

Without warning, Hera had plucked up Percy Jackson, Annabeth’s boyfriend, wiped his memory, and sent him to the Roman camp. In exchange, the Greeks had gotten Jason. None of that was Jason’s fault; but every time Annabeth saw him, she remembered how much she missed Percy.

Percy…who was somewhere below them right now.

Oh, gods. Panic welled up inside her. She forced it down. She couldn’t afford to get overwhelmed.

I’m a child of Athena, she told herself. I have to stick to my plan and not get distracted.

She felt it again—that familiar shiver, as if a psychotic snowman had crept up behind her and was breathing down her neck. She turned, but no one was there.

Must be her nerves. Even in a world of gods and monsters, Annabeth couldn’t believe a new warship would be haunted. The Argo II was well protected. The Celestial bronze shields along the rail were enchanted to ward off monsters, and their onboard satyr, Coach Hedge, would have sniffed out any intruders.

Annabeth wished she could pray to her mother for guidance, but that wasn’t possible now. Not after last month, when she’d had that horrible encounter with her mom and gotten the worst present of her life. …

The cold pressed closer. She thought she heard a faint voice in the wind, laughing. Every muscle in her body tensed. Something was about to go terribly wrong.

She almost ordered Leo to reverse course. Then, in the valley below, horns sounded. The Romans had spotted them.

Annabeth thought she knew what to expect. Jason had described Camp Jupiter to her in great detail. Still, she had trouble believing her eyes. Ringed by the Oakland Hills, the valley was at least twice the size of Camp Half-Blood. A small river snaked around one side and curled toward the center like a capital letter G, emptying into a sparkling blue lake.

Directly below the ship, nestled at the edge of the lake, the city of New Rome gleamed in the sunlight. She recognized landmarks Jason had told her about—the hippodrome, the coliseum, the temples and parks, the neighborhood of Seven Hills with its winding streets, colorful villas, and flowering gardens.

She saw evidence of the Romans’ recent battle with an army of monsters. The dome was cracked open on a building she guessed was the Senate House. The forum’s broad plaza was pitted with craters. Some fountains and statues were in ruins.

Dozens of kids in togas were streaming out of the Senate House to get a better view of the Argo II. More Romans emerged from the shops and cafés, gawking and pointing as the ship descended.

About half a mile to the west, where the horns were blowing, a Roman fort stood on a hill. It looked just like the illustrations Annabeth had seen in military history books—with a defensive trench lined with spikes, high walls, and watchtowers armed with scorpion ballistae. Inside, perfect rows of white barracks lined the main road—the Via Principalis.

A column of demigods emerged from the gates, their armor and spears glinting as they hurried toward the city. In the midst of their ranks was an actual war elephant.

Annabeth wanted to land the Argo II before those troops arrived, but the ground was still sever
al hundred feet below. She scanned the crowd, hoping to catch a glimpse of Percy.

Then something behind her went BOOM!

The explosion almost knocked her overboard. She whirled and found herself eye to eye with an angry statue.

Apparently he had exploded into existence, right there on the deck. Sulfurous yellow smoke rolled off his shoulders. Cinders popped around his curly hair. From the waist down, he was nothing but a square marble pedestal. From the waist up, he was a muscular human figure in a carved toga.

Jason shot Annabeth a look that said, I’ve got this.

“Oh, I remember you, Jason!” Terminus grumbled. “I thought you had better sense than to consort with the enemies of Rome!”

“But they’re not enemies—”

“Ha!” snapped the statue. “Don’t try that charmspeak on me, young lady. And put down that dagger before I slap it out of your hands!”

Piper glanced at her bronze dagger, which she’d apparently forgotten she was holding. “Um…okay. But how would you slap it? You don’t have any arms. ”

“Impertinence!” There was a sharp POP and a flash of yellow. Piper yelped and dropped the dagger, which was now smoking and sparking.

“Lucky for you I’ve just been through a battle,” Terminus announced. “If I were at full strength, I would’ve blasted this flying monstrosity out of the sky already!”

“Hold up. ” Leo stepped forward, wagging his Wii controller. “Did you just call my ship a monstrosity? I know you didn’t do that. ”

The idea that Leo might attack the statue with his gaming device was enough to snap Annabeth out of her shock.

“Let’s all calm down. ” She raised her hands to show she had no weapons. “I take it you’re Terminus, the god of boundaries. Jason told me you protect the city of New Rome, right? I’m Annabeth Chase, daughter of—”

“Oh, I know who you are!” The statue glared at her with its blank white eyes. “A child of Athena, Minerva’s Greek form. Scandalous! You Greeks have no sense of decency. We Romans know the proper place for that goddess. ”

Annabeth clenched her jaw. This statue wasn’t making it easy to be diplomatic. “What exactly do you mean, that goddess? And what’s so scandalous about—”

“Right!” Jason interrupted. “Anyway, Terminus, we’re here on a mission of peace. We’d love permission to land so we can—”

“Impossible!” the god squeaked. “Lay down your weapons and surrender! Leave my city immediately!”

“Both!” Terminus said. “Surrender, then leave. I am slapping your face for asking such a stupid question, you ridiculous boy! Do you feel that?”

“Wow. ” Leo studied Terminus with professional interest. “You’re wound up pretty tight. You got any gears in there that need loosening? I could take a look. ”

He exchanged the Wii controller for a screwdriver from his magic tool belt and tapped the statue’s pedestal.

The Mark of Athena by Rick Riordan / Young Adult / Fantasy have rating 4.1 out of 5 / Based on57 votes