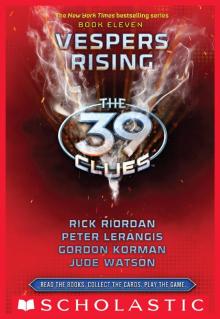 It was a fine autumn morning. A crisp wind had blown away the fog, and sunshine sparkled on the Celtic Sea.

In the distance, the coast of the Irish mainland stretched out lush and green. All of that land, as far as Damien could see, had been controlled by the Vesper family for centuries. From this island, a mile offshore, Damien couldn’t see his ancestral estate — a castle he hadn’t visited in over a year. He couldn’t see his peasants dying or hear them crying in their squalor and misery. He couldn’t smell the stench of death. Far to the northeast, one pillar of smoke snaked into the blue sky — probably another village being burned — but otherwise everything looked peaceful and beautiful. No sign of the Black Death.

Damien sipped his mulled wine, enjoying the scent of clove and nutmeg. He found it ridiculous that in this modern age, the year 1507, he still had to flee the plague — the same sickness that had cursed Ireland in his great-great-great-grandfather’s time. So many advances in the sciences since then, so many amazing discoveries, and still the plague hampered his plans.

But no matter. The Black Death couldn’t touch him here. He simply left his lieutenants in charge on the mainland to collect his taxes. He ignored their nervous reports about the hundreds dying each week, his peasants’ annoying pleas for help. He continued his work in peace, enjoying the acquisitions his agents sent him from across Europe.

He gazed at the woodblock-panel map now adorning his wall — a beautiful piece just arrived from France. Reports and sketches from Italy covered his desk. Damien searched the world for rare treasures and powerful secrets. Yet a single message whispered in his ear this morning by his neighbors’ housekeeper might be more important than any intelligence he’d ever received.

Was it possible that the most powerful secret in the world, a bit of information that could help Damien realize his wildest ambitions, was hiding right under his nose?

This morning, he intended to find out.

His eyes drifted to the new mosaic on his ceiling: a circle five feet in diameter depicting the Vesper coat of arms, but it was more than decoration. He’d recently installed the trap for his amusement. He’d thought to try it out on some lazy servant or the next guard who fell asleep on duty. But now it would serve a much more important purpose. He would test his theory. If he was right, Damien Vesper might become the most powerful man in the world.

There was a rap at the door. His servant Balthazar stepped through, bowing low. “My lord, Gideon Cahill is here. ”

Damien smiled. He didn’t plan on killing anyone today. But he did believe in being flexible.

“Show him in,” Damien ordered.

Gideon was dressed in his usual peasant clothes — quite unbecoming for a man of his talents.

His hair was a swirl of wild gray tufts like a bank of storm clouds. His rugged face was darkened from years of brewing mixtures in a smoky laboratory. Chemicals had turned his frock into a palette of stains, and his forearms were covered with notes in Latin — reminders that Gideon would write on himself when he couldn’t be bothered to find a piece of parchment.

Only Gideon’s gold ring, a family heirloom much too fine for a peasant, marked him as a man of worth. And his eyes — still fierce and bright as ever under bushy gray brows.

Those eyes had first caught Damien’s attention a decade ago, when Gideon Cahill stood up at the Christmas feast, at Damien’s own table, and dared to correct him on a point of astronomy, citing some new work by a scientist named Copernicus.

Damien was not used to being corrected. He might have had Gideon flogged for his rudeness, but the intelligent gleam in Gideon’s eyes gave him pause.

He remembered thinking: Here is a man I could use. Not a sheep. A man of intellect.

After the feast, the two of them had talked into the night, discussing learned subjects no one else in Vesper’s miserable backwater domain could hope to understand. It had been the beginning of a rare friendship.

True, that friendship had frayed since the Cahills and Vesper and his household had fled to this island together. Sometimes weeks would go by as Gideon secluded himself in his lab, only sending notes to Vesper’s manor when he needed supplies or money. If not for the Cahills’ housekeeper, Maria, Damien would’ve been intolerably ignorant of Gideon’s activities, but Maria was an imperfect spy at best.

The last time Damien had seen Gideon in person, about a week ago, Damien had been startled — even concerned — by how much his friend had aged. Poor, noble Gideon, who took the plague so personally and labored like Hercules to find a cure. He had looked no better than one of Vesper’s serfs, broken from years of hard fieldwork.

But now … just as the housekeeper had reported, something about Gideon Cahill had changed drastically. Gideon stood straighter. His shoulders seemed broader. Was his hair actually darker? It seemed impossible, but Gideon Cahill seemed healthier, younger.

He’s made something in that evil laboratory of his, m’lord, Maria had whispered nervously. Sick for a while, he was. But now he’s changed — turned stronger, quicker, even his hearing is uncanny! I heard him talking to himself about a formula, a concoction. He’s taken to witchcraft, I fear. M’lord, it’s not natural, the things I seen him do!

Damien did not believe in witchcraft, but Maria’s tone had been sufficiently alarming to get his attention. She’d spied on the Cahills’ household for him for years but never once come to him in such a state of panic. Now, seeing Gideon in person, Damien’s suspicions deepened.

“My dear Gideon. ” Damien clasped his friend’s calloused hands. “Come, you must see my new acquisitions!”

Gideon scanned the room warily before stepping inside. Damien felt a twinge of annoyance. Another change in the past few months: Gideon seemed increasingly mistrustful, actively avoiding Damien’s company.

Damien couldn’t abide the idea that Gideon might be hiding something.

He cloaked his anger with a broad smile and shepherded his friend into the study until Gideon stood just beneath the new mosaic crest on the ceiling.

“You see?” Damien leaned over his desk and spread out half a dozen charcoal sketches. “These are only quick studies, of course. But my agent in Florence tells me this artist, Leonardo, is a master and also quite an inventor of mechanical devices — which, as you know, are my passion. Leonardo just completed a portrait of Lisa del Giocondo. He calls it the Mona Lisa. I thought I might commission him to do a portrait of me, and while he’s here, I can pick his mind for mechanical secrets. How does that sound?”

Vesper chuckled. Gideon was never easy to impress, which just made Damien more determined to impress him — even if today might be the last time.

He pushed aside the Leonardo sketches. “Perhaps you’re right. But surely you must admit this was worth the price. ”

Damien gestured grandly at his new wall map — a series of twelve woodblock panels showing the entire globe brightly painted in blue and green. “The newest, most accurate map anywhere, Gideon. It’s an exact replica of one just commissioned in the duchy of Lorraine. Fellow named Waldseemüller created it. What do you notice?”

Gideon’s keen eyes studied the map for no more than a heartbeat. “The new continents. He has labeled them … America?”

“Yes, after that explorer Amerigo Vespucci. Seems a silly name to me, but no matter. Our world has officially expanded, Gideon! Don’t you find that exciting? Think of all those lands to conquer, all those kingdoms of savages with riches beyond imagining. Spain is already becoming wealthy, you know, bringing back shiploads of gold and silver. I tell you, if a man had enough power, he could s
et himself up as an emperor in the New World. It could as easily be called Vesperia, eh?”

Gideon frowned. “It seems to me, Damien, that we have enough trouble caring for the lands we already have. Forty-three more of our villagers died this week, you know. We must find a cure for the Black Death, and I doubt the answer lies in this … America. ”

Again, Damien kept his annoyance in check. Gideon was the only one who would dare speak so boldly to him. In years past, Vesper had found his honesty refreshing. He even allowed Gideon to call him by his given name.

But now Damien wondered if he’d allowed Gideon too much familiarity.

Our villagers? These lands belonged to Vesper alone. And when had his friend become so narrow-minded? Vesper showed him the new continents full of thousands of would-be subjects — a world to be conquered — and Gideon was concerned about forty-three plague-ridden peasants.

“Well,” Damien said breezily, “a cure would be admirable, of course, which is why I’ve provided you quite a substantial amount of funding. How goes your research?”

There it was again: that slight hesitation. Gideon was definitely hiding something. The look in his eyes was almost fear. And yet physically he seemed so full of energy, standing tall and straight. He fairly radiated health.

A formula, a concoction, the housekeeper had said. Interesting …

“It goes slowly,” Gideon said at last. “The mercury is too poisonous. The iron solute does not balance the humors of the body as I’d hoped. ” He looked up, as if just noticing the mosaic crest above him. “More new artwork?”

Damien ignored the question, though he was conscious of the trap’s release button built into the floor, just a few inches from his left boot. If things went wrong, Gideon was in the perfect position.

“Perhaps if you used live subjects,” Damien suggested, “human volunteers, as I proposed —”

“We have more than enough to spare. And it would speed your work”

Damien pursed his lips. After all these years, Gideon Cahill still mystified him. So dedicated to finding a cure, and yet he refused to do the logical thing and experiment on peasants. Unless, of course, he had already tested his cure some other way….

“Then you have made no breakthrough?” Damien asked.

Gideon hesitated. “I have found no cure. ”

“Ah. But you’ve found something. ”

So now he addresses me correctly, Damien thought.

“I’ve known you for ten years, my friend,” Damien said. “You are a man of many talents, but deception is not among them. You are a poor liar. You’ve found something important, using my fortune, using equipment and ingredients that I have provided from the far corners of the globe, using this refuge island in my territory. ”

“This island is Cahill family land, my lord,” Gideon corrected, “granted to us centuries ago by the Gaelic kings. We invited you here, gave you the use of this manor house —”

“Yes, yes. ” Damien waved aside the technicalities. “But it is still in my barony, and you owe me allegiance. At the very least, you owe me the truth. What have you found?”

Gideon locked eyes with him, and Damien took an involuntary step back. Gideon looked terrified, but Damien realized Gideon wasn’t scared of him. Gideon Cahill was scared of what he’d discovered.

Vespers Rising by Rick Riordan / Actions & Adventure / Mystery & Detective have rating 5.7 out of 5 / Based on34 votes