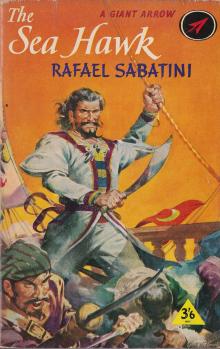 Lord Henry Goade, who had, as we shall see, some personal acquaintancewith Sir Oliver Tressilian, tells us quite bluntly that he wasill-favoured. But then his lordship is addicted to harsh judgments andhis perceptions are not always normal. He says, for instance, of Anne ofCleves, that she was the "ugliest woman that ever I saw." As far as wecan glean from his own voluminous writings it would seem to be extremelydoubtful whether he ever saw Anne of Cleves at all, and we suspect himhere of being no more than a slavish echo of the common voice, whichattributed Cromwell's downfall to the ugliness of this bride he procuredfor his Bluebeard master. To the common voice from the brush of Holbein,which permits us to form our own opinions and shows us a lady whois certainly very far from deserving his lordship's harsh stricture.Similarly, I like to believe that Lord Henry was wrong in hispronouncement upon Sir Oliver, and I am encouraged in this belief by thepen-portrait which he himself appends to it. "He was," he says, "a tall,powerful fellow of a good shape, if we except that his arms were toolong and that his feet and hands were of an uncomely bigness. In face hewas swarthy, with black hair and a black forked beard; his nose wasbig and very high in the bridge, and his eyes sunk deep under beetlingeyebrows were very pale-coloured and very cruel and sinister. Hehad--and this I have ever remarked to be the sign of great virility ina man--a big, deep, rough voice, better suited to, and no doubt ofteneremployed in, quarter-deck oaths and foulnesses than the worship of hisMaker."

Thus my Lord Henry Goade, and you observe how he permits his lingeringdisapproval of the man to intrude upon his description of him. Thetruth is that--as there is ample testimony in his prolific writings--islordship was something of a misanthropist. It was, in fact, hismisanthropy which drove him, as it has driven many another, toauthorship. He takes up the pen, not so much that he may carry out hisprofessed object of writing a chronicle of his own time, but to theend that he may vent the bitterness engendered in him by his fall fromfavour. As a consequence he has little that is good to say of anyone,and rarely mentions one of his contemporaries but to tap the sources ofa picturesque invective. After all, it is possible to make excuses forhim. He was at once a man of thought and a man of action--a combinationas rare as it is usually deplorable. The man of action in him might havegone far had he not been ruined at the outset by the man of thought. Amagnificent seaman, he might have become Lord High Admiral of Englandbut for a certain proneness to intrigue. Fortunately for him--sincehead where nature had placed it--he came betimes under a cloud ofsuspicion. His career suffered a check; but it was necessary to affordhim some compensation since, after all, the suspicions could not besubstantiated.

Consequently he was removed from his command and appointed by theQueen's Grace her Lieutenant of Cornwall, a position in which it wasjudged that he could do little mischief. There, soured by this blightingof his ambitions, and living a life of comparative seclusion, he turned,as so many other men similarly placed have turned, to seek consolationin his pen. He wrote his singularly crabbed, narrow and superficialHistory of Lord Henry Goade: his own Times--which is a miracle ofinjuvenations, distortions, misrepresentations, and eccentric spelling.In the eighteen enormous folio volumes, which he filled with his minuteand gothic characters, he gives his own version of the story of whathe terms his downfall, and, having, notwithstanding his prolixity,exhausted this subject in the first five of the eighteen tomes, heproceeds to deal with so much of the history of his own day as cameimmediately under his notice in his Cornish retirement.

For the purposes of English history his chronicles are entirelynegligible, which is the reason why they have been allowed to remainunpublished and in oblivion. But to the student who attempts to followthe history of that extraordinary man, Sir Oliver Tressilian, they areentirely invaluable. And, since I have made this history my presenttask, it is fitting that I should here at the outset acknowledge myextreme indebtedness to those chronicles. Without them, indeed, it wereimpossible to reconstruct the life of that Cornish gentleman whobecame a renegade and a Barbary Corsair and might have become Basha ofAlgiers--or Argire, as his lordship terms it--but for certain matterswhich are to be set forth.

Lord Henry wrote with knowledge and authority, and the tale he has totell is very complete and full of precious detail. He was, himself, aneyewitness of much that happened; he pursued a personal acquaintancewith many of those who were connected with Sir Oliver's affairs that hemight amplify his chronicles, and he considered no scrap of gossip thatwas to be gleaned along the countryside too trivial to be recorded. Isuspect him also of having received no little assistance from JasperLeigh in the matter of those events that happened out of England, whichseem to me to constitute by far the most interesting portion of hisnarrative.

The Sea-Hawk by Rafael Sabatini / Actions & Adventure have rating 4.3 out of 5 / Based on17 votes