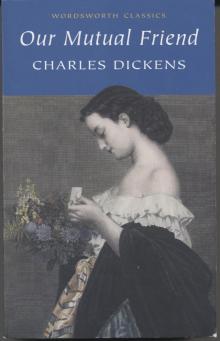 THE CUP AND THE LIP

1. ON THE LOOK OUT 2. THE MAN FROM SOMEWHERE 3. ANOTHER MAN 4. THE R. WILFER FAMILY 5. BOFFIN'S BOWER 6. CUT ADRIFT 7. MR WEGG LOOKS AFTER HIMSELF 8. MR BOFFIN IN CONSULTATION 9. MR AND MRS BOFFIN IN CONSULTATION 10. A MARRIAGE CONTRACT 11. PODSNAPPERY 12. THE SWEAT OF AN HONEST MAN'S BROW 13. TRACKING THE BIRD OF PREY 14. THE BIRD OF PREY BROUGHT DOWN 15. TWO NEW SERVANTS 16. MINDERS AND RE-MINDERS 17. A DISMAL SWAMP

BIRDS OF A FEATHER

1. OF AN EDUCATIONAL CHARACTER 2. STILL EDUCATIONAL 3. A PIECE OF WORK 4. CUPID PROMPTED 5. MERCURY PROMPTING 6. A RIDDLE WITHOUT AN ANSWER 7. IN WHICH A FRIENDLY MOVE IS ORIGINATED 8. IN WHICH AN INNOCENT ELOPEMENT OCCURS 9. IN WHICH THE ORPHAN MAKES HIS WILL 10. A SUCCESSOR 11. SOME AFFAIRS OF THE HEART 12. MORE BIRDS OF PREY 13. A SOLO AND A DUETT 14. STRONG OF PURPOSE 15. THE WHOLE CASE SO FAR 16. AN ANNIVERSARY OCCASION

1. LODGERS IN QUEER STREET 2. A RESPECTED FRIEND IN A NEW ASPECT 3. THE SAME RESPECTED FRIEND IN MORE ASPECTS THAN ONE 4. A HAPPY RETURN OF THE DAY 5. THE GOLDEN DUSTMAN FALLS INTO BAD COMPANY 6. THE GOLDEN DUSTMAN FALLS INTO WORSE COMPANY 7. THE FRIENDLY MOVE TAKES UP A STRONG POSITION 8. THE END OF A LONG JOURNEY 9. SOMEBODY BECOMES THE SUBJECT OF A PREDICTION 10. SCOUTS OUT 11. IN THE DARK 12. MEANING MISCHIEF 13. GIVE A DOG A BAD NAME, AND HANG HIM 14. MR WEGG PREPARES A GRINDSTONE FOR MR BOFFIN'S NOSE 15. THE GOLDEN DUSTMAN AT HIS WORST 16. THE FEAST OF THE THREE HOBGOBLINS 17. A SOCIAL CHORUS

1. SETTING TRAPS 2. THE GOLDEN DUSTMAN RISES A LITTLE 3. THE GOLDEN DUSTMAN SINKS AGAIN 4. A RUNAWAY MATCH 5. CONCERNING THE MENDICANT'S BRIDE 6. A CRY FOR HELP 7. BETTER TO BE ABEL THAN CAIN 8. A FEW GRAINS OF PEPPER 9. TWO PLACES VACATED 10. THE DOLLS' DRESSMAKER DISCOVERS A WORD 11. EFFECT IS GIVEN TO THE DOLLS' DRESSMAKER'S DISCOVERY 12. THE PASSING SHADOW 13. SHOWING HOW THE GOLDEN DUSTMAN HELPED TO SCATTER DUST 14. CHECKMATE TO THE FRIENDLY MOVE 15. WHAT WAS CAUGHT IN THE TRAPS THAT WERE SET 16. PERSONS AND THINGS IN GENERAL 17. THE VOICE OF SOCIETY

POSTSCRIPT, IN LIEU OF PREFACE

BOOK THE FIRST -- THE CUP AND THE LIP

ON THE LOOK OUT

In these times of ours, though concerning the exact year there is noneed to be precise, a boat of dirty and disreputable appearance, withtwo figures in it, floated on the Thames, between Southwark bridge whichis of iron, and London Bridge which is of stone, as an autumn eveningwas closing in.

The figures in this boat were those of a strong man with ragged grizzledhair and a sun-browned face, and a dark girl of nineteen or twenty,sufficiently like him to be recognizable as his daughter. The girlrowed, pulling a pair of sculls very easily; the man, with therudder-lines slack in his hands, and his hands loose in his waistband,kept an eager look out. He had no net, hook, or line, and he couldnot be a fisherman; his boat had no cushion for a sitter, no paint, noinscription, no appliance beyond a rusty boathook and a coil of rope,and he could not be a waterman; his boat was too crazy and too smallto take in cargo for delivery, and he could not be a lighterman orriver-carrier; there was no clue to what he looked for, but he lookedfor something, with a most intent and searching gaze. The tide, whichhad turned an hour before, was running down, and his eyes watchedevery little race and eddy in its broad sweep, as the boat made slighthead-way against it, or drove stern foremost before it, according as hedirected his daughter by a movement of his head. She watched his faceas earnestly as he watched the river. But, in the intensity of her lookthere was a touch of dread or horror.

Allied to the bottom of the river rather than the surface, by reason ofthe slime and ooze with which it was covered, and its sodden state, thisboat and the two figures in it obviously were doing something that theyoften did, and were seeking what they often sought. Half savage as theman showed, with no covering on his matted head, with his brown armsbare to between the elbow and the shoulder, with the loose knot of alooser kerchief lying low on his bare breast in a wilderness of beardand whisker, with such dress as he wore seeming to be made out of themud that begrimed his boat, still there was a business-like usage in hissteady gaze. So with every lithe action of the girl, with every turn ofher wrist, perhaps most of all with her look of dread or horror; theywere things of usage.

'Keep her out, Lizzie. Tide runs strong here. Keep her well afore thesweep of it.'

Trusting to the girl's skill and making no use of the rudder, he eyedthe coming tide with an absorbed attention. So the girl eyed him. But,it happened now, that a slant of light from the setting sun glanced intothe bottom of the boat, and, touching a rotten stain there which boresome resemblance to the outline of a muffled human form, coloured it asthough with diluted blood. This caught the girl's eye, and she shivered.

'What ails you?' said the man, immediately aware of it, though so intenton the advancing waters; 'I see nothing afloat.'

The red light was gone, the shudder was gone, and his gaze, which hadcome back to the boat for a moment, travelled away again. Wheresoeverthe strong tide met with an impediment, his gaze paused for an instant.At every mooring-chain and rope, at every stationery boat or barge thatsplit the current into a broad-arrowhead, at the offsets from the piersof Southwark Bridge, at the paddles of the river steamboats as they beatthe filthy water, at the floating logs of timber lashed together lyingoff certain wharves, his shining eyes darted a hungry look. After adarkening hour or so, suddenly the rudder-lines tightened in his hold,and he steered hard towards the Surrey shore.

Always watching his face, the girl instantly answered to the action inher sculling; presently the boat swung round, quivered as from a suddenjerk, and the upper half of the man was stretched out over the stern.

The girl pulled the hood of a cloak she wore, over her head and over herface, and, looking backward so that the front folds of this hood wereturned down the river, kept the boat in that direction going before thetide. Until now, the boat had barely held her own, and had hovered aboutone spot; but now, the banks changed swiftly, and the deepening shadowsand the kindling lights of London Bridge were passed, and the tiers ofshipping lay on either hand.

The girl turned her face towards him with a start, and rowed in silence.Her face was very pale. He was a hook-nosed man, and with that and hisbright eyes and his ruffled head, bore a certain likeness to a rousedbird of prey.

'Take that thing off your face.'

She put it back.

'Here! and give me hold of the sculls. I'll take the rest of the spell.'

He was moving towards her to change places, but her terrifiedexpostulation stopped him and he resumed his seat.

'It's my belief you hate the sight of the very river.'

'As if it
wasn't your living! As if it wasn't meat and drink to you!'

At these latter words the girl shivered again, and for a moment pausedin her rowing, seeming to turn deadly faint. It escaped his attention,for he was glancing over the stern at something the boat had in tow.

'How can you be so thankless to your best friend, Lizzie? The veryfire that warmed you when you were a babby, was picked out of the riveralongside the coal barges. The very basket that you slept in, the tidewashed ashore. The very rockers that I put it upon to make a cradleof it, I cut out of a piece of wood that drifted from some ship oranother.'

Lizzie took her right hand from the scull it held, and touched herlips with it, and for a moment held it out lovingly towards him: then,without speaking, she resumed her rowing, as another boat of similarappearance, though in rather better trim, came out from a dark place anddropped softly alongside.

'In luck again, Gaffer?' said a man with a squinting leer, who sculledher and who was alone, 'I know'd you was in luck again, by your wake asyou come down.'

There was now a tender yellow moonlight on the river, and the new comer,keeping half his boat's length astern of the other boat looked hard atits track.

'I says to myself,' he went on, 'directly you hove in view, yonder'sGaffer, and in luck again, by George if he ain't! Scull it is,pardner--don't fret yourself--I didn't touch him.' This was in answerto a quick impatient movement on the part of Gaffer: the speaker at thesame time unshipping his scull on that side, and laying his hand on thegunwale of Gaffer's boat and holding to it.

'He's had touches enough not to want no more, as well as I make himout, Gaffer! Been a knocking about with a pretty many tides, ain't hepardner? Such is my out-of-luck ways, you see! He must have passed mewhen he went up last time, for I was on the lookout below bridge here. Ia'most think you're like the wulturs, pardner, and scent 'em out.'

He spoke in a dropped voice, and with more than one glance at Lizzie whohad pulled on her hood again. Both men then looked with a weird unholyinterest in the wake of Gaffer's boat.

'Easy does it, betwixt us. Shall I take him aboard, pardner?'

'No,' said the other. In so surly a tone that the man, after a blankstare, acknowledged it with the retort:

'--Arn't been eating nothing as has disagreed with you, have you,pardner?'

'Why, yes, I have,' said Gaffer. 'I have been swallowing too much ofthat word, Pardner. I am no pardner of yours.'

'Since when was you no pardner of mine, Gaffer Hexam Esquire?'

'And what if I had been accused of robbing a dead man, Gaffer?'

'No. Has a dead man any use for money? Is it possible for a dead man tohave money? What world does a dead man belong to? 'Tother world. Whatworld does money belong to? This world. How can money be a corpse's? Cana corpse own it, want it, spend it, claim it, miss it? Don't try to goconfounding the rights and wrongs of things in that way. But it's worthyof the sneaking spirit that robs a live man.'

'No you won't. I'll tell you what it is. You got off with a short timeof it for putting your hand in the pocket of a sailor, a live sailor.Make the most of it and think yourself lucky, but don't think afterthat to come over ME with your pardners. We have worked together in timepast, but we work together no more in time present nor yet future. Letgo. Cast off!'

'If I don't get rid of you this way, I'll try another, and chop you overthe fingers with the stretcher, or take a pick at your head with theboat-hook. Cast off! Pull you, Lizzie. Pull home, since you won't letyour father pull.'

Lizzie shot ahead, and the other boat fell astern. Lizzie's father,composing himself into the easy attitude of one who had asserted thehigh moralities and taken an unassailable position, slowly lighted apipe, and smoked, and took a survey of what he had in tow. What he hadin tow, lunged itself at him sometimes in an awful manner when the boatwas checked, and sometimes seemed to try to wrench itself away, thoughfor the most part it followed submissively. A neophyte might havefancied that the ripples passing over it were dreadfully like faintchanges of expression on a sightless face; but Gaffer was no neophyteand had no fancies.