Home » Brandon Sanderson » The Well of Ascension
←Home
The well of ascension, p.1

The Well of Ascension, p.1 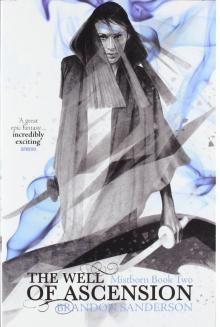 HEIR OF THE SURVIVOR

I write these words in steel, for anything not set in metal cannot be trusted.

THE ARMY CREPT LIKE A dark stain across the horizon.

King Elend Venture stood motionless upon the Luthadel city wall, looking out at the enemy troops. Around him, ash fell from the sky in fat, lazy flakes. It wasn't the burnt white ash that one saw in dead coals; this was a deeper, harsher black ash. The Ashmounts had been particularly active lately.

Elend felt the ash dust his face and clothing, but he ignored it. In the distance, the bloody red sun was close to setting. It backlit the army that had come to take Elend's kingdom from him.

"How many?" Elend asked quietly.

"Fifty thousand, we think," Ham said, leaning against the parapet, beefy arms folded on the stone. Like everything in the city, the wall had been stained black by countless years of ashfalls.

"Fifty thousand soldiers. . . " Elend said, trailing off. Despite heavy recruitment, Elend barely had twenty thousand men under his command—and they were peasants with less than a year of training. Maintaining even that small number was straining his resources. If they'd been able to find the Lord Ruler's atium, perhaps things would be different. As it was, Elend's rule was in serious danger of economic disaster.

"What do you think?" Elend asked.

"I don't know, El," Ham said quietly. "Kelsier was always the one with the vision. "

"But you helped him plan," Elend said. "You and the others, you were his crew. You were the ones who came up with a strategy for overthrowing the empire, then made it happen. "

Ham fell silent, and Elend felt as if he knew what the man was thinking. Kelsier was central to it all. He was the one who organized, the one who took all of the wild brain-storming and turned it into a viable operation. He was the leader. The genius.

And he'd died a year before, on the very same day that the people—as part of his secret plan—had risen up in fury to overthrow their god emperor. Elend had taken the throne in the ensuing chaos. Now it was looking more and more like he would lose everything that Kelsier and his crew had worked so hard to accomplish. Lose it to a tyrant who might be even worse than the Lord Ruler. A petty, devious bully in "noble" form. The man who had marched his army on Luthadel.

"I don't know, honestly. I worry that they are. That army has frightened them, Ham. " And with good reason, he thought. "Anyway, I have a proposal for the meeting in two days. I'll try to talk them out of doing anything rash. Dockson got back today, right?"

"I think we should call a meeting of the crew," Elend said. "See if we can come up with a way out of this. "

"We'll still be pretty shorthanded," Ham said, rubbing his chin. "Spook isn't supposed to be back for another week, and the Lord Ruler only knows where Breeze went. We haven't had a message from him in months. "

Elend sighed, shaking his head. "I can't think of anything else, Ham. " He turned, staring out over the ashen landscape again. The army was lighting campfires as the sun set. Soon, the mists would appear.

I need to get back to the palace and work on that proposal, Elend thought.

"Where'd Vin run off to?" Ham asked, turning back to Elend.

Vin landed softly on the damp cobblestones, watching as the mists began to form around her. They puffed into existence as darkness fell, growing like tangles of translucent vines, twisting and wrapping around one another.

The great city of Luthadel was still. Even now, a year after the Lord Ruler's death and the rise of Elend's new free government, the common people stayed in their homes at night. They feared the mists, a tradition that went far deeper than the Lord Ruler's laws.

Vin slipped forward quietly, senses alert. Inside herself, as always, she burned tin and pewter. Tin enhanced her senses, making it easier for her to see in the night. Pewter made her body stronger, made her lighter on her feet. These, along with copper—which had the power to hide her use of Allomancy from others who were burning bronze—were metals that she left on almost all the time.

Some called her paranoid. She thought herself prepared. Either way, the habit had saved her life on numerous occasions.

She approached a quiet street corner and paused, peeking out. She'd never really understood how she burned metals; she could remember doing it for as long as she'd been alive, using Allomancy instinctively even before she was formally trained by Kelsier. It didn't really matter to her. She wasn't like Elend; she didn't need a logical explanation for everything. For Vin, it was enough that when she swallowed bits of metal, she was able to draw upon their power.

Power she appreciated, for she well knew what it was like to lack it. Even now, she was not what one would likely envision as a warrior. Slight of frame and barely five feet tall, with dark hair and pale skin, she knew she had an almost frail look about her. She no longer displayed the underfed look she had during her childhood on the streets, but she certainly wasn't someone any man would find intimidating.

She liked that. It gave her an edge—and she needed every edge she could get.

She also liked the night. During the day, Luthadel was cramped and confining despite its size. But at night the mists fell like a deep cloud. They dampened, softened, shaded. Massive keeps became shadowed mountains, and crowded tenements melted together like a chandler's rejected wares.

Vin crouched beside her building, still watching the intersection. Carefully, she reached within herself and burned steel—one of the other metals she'd swallowed earlier. Immediately, a group of translucent blue lines sprang up around her. Visible only to her eyes, the lines pointed from her chest to nearby sources of metal—all metals, no matter what type. The thickness of the lines was proportionate to the size of the metal pieces they met. Some pointed to bronze door latches, others to crude iron nails holding boards together.

She waited silently. None of the lines moved. Burning steel was an easy way to tell if someone was moving nearby. If they were wearing bits of metal, they would trail telltale moving lines of blue. Of course, that wasn't the main purpose of steel. Vin reached her hand carefully into her belt pouch and pulled out one of the many coins that sat within, muffled by cloth batting. Like all other bits of metal, this coin had a blue line extending from its center to Vin's chest.

She flipped the coin into the air, then mentally grabbed its line and—burning steel—Pushed on the coin. The bit of metal shot into the air, arcing through the mists, forced away by the Push. It plinked to the ground in the middle of the street.

The mists continued to spin. They were thick and mysterious, even to Vin. More dense than a simple fog and more constant than any normal weather pattern, they churned and flowed, making rivulets around her. Her eyes could pierce them; tin made her sight more keen. The night seemed lighter to her, the mists less thick. Yet, they were still there.

A shadow moved in the city square, responding to her coin—which she had Pushed out into the square as a signal. Vin crept forward, and recognized OreSeur the kandra. He wore a different body than he had a year ago, during the days when he had acted the part of Lord Renoux. Yet, this balding, nondescript body had now become just as familiar to Vin.


; OreSeur met up with her. "Did you find what you were looking for, Mistress?" he asked, tone respectful—yet somehow still a little hostile. As always.

Vin shook her head, glancing around in the darkness. "Maybe I was wrong," she said. "Maybe I wasn't being followed. " The acknowledgment made her a bit sad. She'd been looking forward to sparring with the Watcher again tonight. She still didn't even know who he was; the first night, she'd mistaken him for an assassin. And maybe he was. Yet, he seemed to display very little interest in Elend—and a whole lot of interest in Vin.

"We should go back to the wall," Vin decided, standing up. "Elend will be wondering where I went. "

OreSeur nodded. At that moment, a burst of coins shot through the mists, spraying toward Vin.

I have begun to wonder if I am the only sane man left. Can the others not see? They have been waiting so long for their hero to come—the one spoken of in Terris prophecies—that they quickly jump between conclusions, presuming that each story and legend applies to this one man.

VIN REACTED IMMEDIATELY, SPRINGING AWAY. She moved with incredible speed, tasseled cloak swirling as she skidded across the wet cobblestones. The coins hit the ground behind her, throwing up chips of stone, then leaving trails in the mist as they ricocheted away.

"OreSeur, go!" she snapped, though he was already fleeing toward a nearby alleyway.

Vin spun into a low crouch, hands and feet on the cool stones, Allomantic metals flaring in her stomach. She burned steel, watching the translucent blue lines appear around her. She waited, tense, watching for. . .

Another group of coins shot from the dark mists, each one trailing a blue line. Vin immediately flared steel and Pushed against the coins, deflecting them out into the darkness.

The street around her was wide—for Luthadel—though tenements rose high on either side. Mist spun lazily, making the ends of the street disappear into a haze.

A group of eight men appeared from the mists and approached. Vin smiled. She had been right: Someone was following her. These men weren't, however, the Watcher. They didn't have his solid grace, his sense of power. These men were something far more blunt. Assassins.

It made sense. If she had just arrived with an army to conquer Luthadel, the first thing she'd have done was send in a group of Allomancers to kill Elend.

She felt a sudden pressure at her side, and she cursed as she was thrown off balance, her coin pouch jerking away from her waist. She ripped its string free, letting the enemy Allomancer Push the coins away from her. The assassins had at least one Coinshot—a Misting who had the power to burn steel and Push on metals. In fact, two of the assassins trailed blue lines pointing to coin pouches of their own. Vin considered returning the favor and Pushing their pouches away, but hesitated. No need to play her hand yet. She might need those coins.

Without coins of her own, she couldn't attack from a distance. However, if this was a good team, then attacking from a distance would be pointless—their Coinshots and Lurchers would be ready to deal with shot coins. Fleeing wasn't an option either. These men hadn't come for her alone; if she fled, they'd continue on to their real goal.

Nobody sent assassins to kill bodyguards. Assassins killed important men. Men like Elend Venture, king of the Central Dominance. The man she loved.

Vin flared pewter—body growing tense, alert, dangerous. Four Thugs at the front, she thought, eyeing the advancing men. The pewter burners would be inhumanly strong, capable of surviving a great deal of physical punishment. Very dangerous up close. And the one carrying the wooden shield is a Lurcher.

The Well of Ascension by Brandon Sanderson / Fantasy have rating 5.7 out of 5 / Based on17 votes